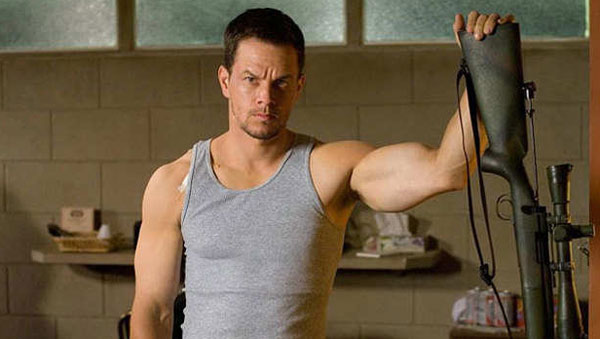 If the movie career tanks, the guns are still firing for the underpant career.

Shooter is Sharp but Misses the Marky.

SHOOTER achieves that balance between action, political skullduggery, pretty orange explosions and Mark Wahlberg’s big guns (and I don’t mean his military sniper rifles), which notches it a cut above most political thrillers of its paranoid ilk – until its pat ending.

With his shrapnel-explosive performance in THE DEPARTED, Wahlberg shrugged off the last vestiges of Marky Mark, so from now on – in deference to this bona fide Actor – I respectfully abstain from any allusions to wigga rap, funky bunches and exposed underpant. (But we’ve still got his biceps and obliques – give a reviewer something to work with!)

Wahlberg is patriot Bob Lee Swagger, USMC sharpshooter, able to hit moving targets over a mile away, who leaves the corp disillusioned after a morally-ambiguous mission in Ethiopia goes all hela-snafu. After three idyllic years isolated in panoramic mountains with his big dog, a copy of the 9-11 Commission Report, and web-surfing to “see what propaganda they’re feeding us now,” he receives an unannounced, unwelcome visit from Colonel Isaac Johnson (Danny Glover, lisping badly through his dentures – he really is gettin’ too old for this shit), who wants to hire Swagger for a unique mission – to deter a presidential assassination by scoping out potential methods on how a sharpshooter of Swagger’s caliber may be able to pull it off.

Though we could hear a frame-up coming like an eighteen-wheeler with a bad clutch, our boy Swagger obliviously swaggers into it. If his mind is soft, his body is still hard (calm down, ladies!), and he fields two bullet wounds and a green FBI agent (Michael Peña – last seen under a WORLD TRADE CENTER) to escape narrowly with his life, while a whole government arm deploys to manhunt him when they should be saving hostages in Iran or fixing potholes on my street.

Peña is Nick Memphis, who refuses to accept the “official” FBI version of Swagger’s assassination attempt, due to inadvertently being bitch-slapped by Swagger himself during his escape. His jigsaw construction of the clues leads him to ally with Swagger, who has in turn allied with Sarah (Kate Mara), the girlfriend of a dead fellow soldier. Which kinda annoys for its cliché. Let’s not kid ourselves – when the “ally-with-the-dead-buddy’s-ex” scenario arises in a movie, the girl is ALWAYS single and it ALWAYS leads to panty – I think the first clue might have been when Sarah opens her door to the filthy, terrified, near-death Swagger (who is no more than a mild acquaintance), dressed in nothing but see-through top and undies, not bothering to close her robe. Then we just sit back and wait for Wahlberg to get the guns out… which he does, as she dresses his wounds, which in movie parlance is just another method of foreplay.

Swagger and Memphis uncover the all-purpose “corrupt government plot” behind Swagger’s setup, with quite obvious digs at the George W. administration along the way. (At this juncture – 2007, four years into an unwinnable war after two years in an unwon war – it’s quite easy to dig and get a collective amen.) When Colonel Johnson lisps, “Do we allow America to be ruled by thugs?” Swagger replies, “Some years we do.” Oh, snap!

Directed by Antoine Fuqua, from Jonathan Lemkin‘s screenplay of Stephen Hunter‘s novel, Point of Impact, Swagger’s quest terminates Rade Sherbedgia and Elias Koteas as bad guys along the ladder, Ned Beatty eventually uncovered as the corrupt senator atop the ladder, reveling in the nation’s political audacity and his perceived impunity, “We live in a country where the Secretary of Defense can go on national tv and say it’s about freedom and not about oil.” “The bosses know. We know their bosses know. The problem is in admitting that the leaders know.” With his words, this movie might as well be handing out subpoenas to Rumsfeld, Bush, Rove, Cheney and Wolfowitz.

It is astounding to realize that the definition of Patriot has flip-flopped to someone who DOES own a copy of the 9-11 Commission Report. Not ten years ago, anyone surfing the web, mumbling about propaganda would have been considered treasonous. But Swagger is painted as the reddest, whitest and bluest Patriot in this film – BECAUSE he questions the government. Illustrates how adversely the George W. Klan has affected the United States: that the HERO of a popular movie – not “anti-hero” or “ambiguous villain” – can criticize the administration so loudly and meet with vindication rather than stultification.

But this is where the film meanders into “We Can Dream, Can’t We?” status. The conspiracy reaches to such high government offices that Beatty’s character is right to contemptuously sneer about one sharpshooter not being able to curb it. But after a faux-climax that does not payoff (a grand, panoramic shootout in snowy mountains) and a military hearing which also does not payoff (where Swagger demonstrates his big gun – the one that can counter the earth’s Coriolis effect with its power, not the one that can make ladies drop trou when body-oiled), we know that a REAL climax is coming, one of insensible – yet Eastwood-ian avenger – proportions. (Cue pretty orange explosions.)

It doesn’t seem to matter to the film-makers that Swagger’s methodology is only the corrupt administration’s Decider-like tyranny and Might-Is-Right anarchy turned back on themselves – which therefore does not raise the Hero morally above his opponents but abandons him right amongst them. The paradox is that the parochial W. Bush administration regards only those people who support and behave like them (i.e. morally bankrupt) as the only true Patriots.

So after SHOOTER succinctly sends the disheartening, yet intrinsically correct message that you can’t clean up the insidious corruption amongst elected officials with a big gun – Bob Lee Swagger does just that.