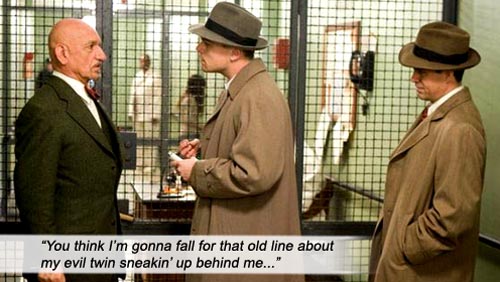 Just dropped in – to see what condition my condition was in…

The mind is its own place, and in itself can make a heaven of hell, a hell of heaven.
–John Milton, Paradise Lost.

What a beautiful, sophisticated, mind-leveling thriller! SHUTTER ISLAND is not “scary,” but creepy, disturbing and filled with enough tension and intrigue to drown a plush toy.

1954: Detective Teddy Daniels (Leo DiCaprio) and his partner Chuck (Mark Ruffalo) on a mission to Shutter Island, an institution for the criminally insane, to investigate the disappearance of a female murderer. The head warden Dr. Cawley (Ben Kingsley) outlines the mystery “as if she evaporated through the walls.”

As Teddy carries out his investigation, things start to fall out of place more readily than they fall into it, and events start to lead Teddy to the conclusion that everyone is conspiring to let this dangerous criminal disappear without helping him locate her. Why then, was he brought here? And why can’t he leave? At first, it’s because a raging storm cuts off the ferry service. And then…well…

SHUTTER ISLAND conjures those fears of walking into a psyche ward and not being able to walk out again, because people start treating YOU as insane. Didn’t we learn anything from ONE FLEW OVER THE CUCKOO’S NEST? Teddy arrived with his partner Chuck; halfway through his stay, Dr. Cawley begins asking him, “What partner? You came here alone.”

One of the characters nails the paradox: “People tell the world you’re crazy, and all your protests to the contrary just confirm what they’re saying. Once you’re declared insane, then anything you do is called part of that insanity; any reasonable protests are ‘denial,’ any valid fears are ‘paranoia’…”

Ruffalo is enjoyable as always, bringing a breezy humor to what could have turned into a darker role; Max von Sydow brings enough dark for everyone as a foreboding old doctor; even Elias Koteas, a prisoner whose face looks like it was put together by Victor Frankenstein, isn’t as scary as von Sydow; Patricia Clarkson makes an intriguing appearance as a woman hiding out in a cave, who may just be who Teddy is looking for. Or she may just be a figment of his imagination. Or our imagination. Or maybe we’re just watching INCEPTION and need to stop kidding ourselves that they’ll let us out of here alive…

From a novel by Dennis Lehane, Martin Scorsese directs – or should that be “misdirects”? – brilliantly, never revealing enough information to give away the game, yet egging us on with just enough to tie us into a straightjacket. SHUTTER ISLAND is a Hitchcockian mind-bender that springs such a head trip in its last few minutes that you will watch it again immediately with completely new eyes. And you will see every clue hidden subtly in plain sight.