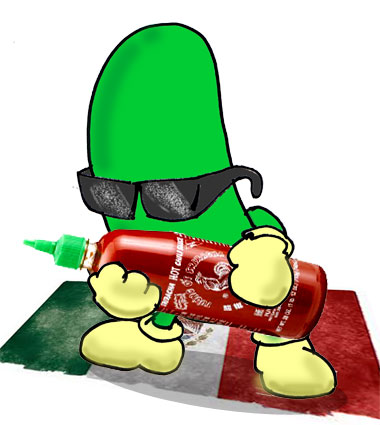 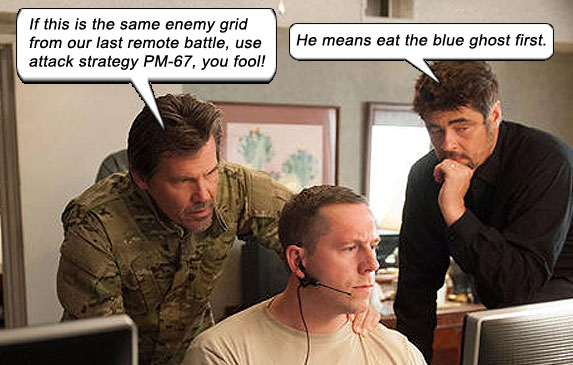 When Right is Might, and Wrong is Hot Sauce.

In the 21st Century, great corporations will bestride the Earth, replacing nations as the true creators of history, amassing powerful private armies to do their bidding. But in delicate situations, they need matters adjudicated on a single day… by a solitary man.
— WAR, INC. (writers: Mark Leyner, Jeremy Pikser, John Cusack)

Benicio Del Toro (GUARDIANS OF THE GALAXY) is scorching as CIA ultra-covert operative Alejandro, in the blistering drug cartel crime drama SRIRACHA. [Editor note: Really? This movie is named after a hot sauce?]

Then who’s the sriracha?

Doe-eyed Emily Blunt (EDGE OF TOMORROW) is sriracha! She’s lithe FBI ballerina Kate Macer (toughguy names for ladies!), conscripted by the CIA to hang around like a fifth wheel to accredit their extra-legal activities, because these are the games grownups play. And Josh Brolin (OLDBOY 2013) does his best Jeff Bridges, as CIA guru Matt Graver, who treats every scene like it’s his lounge room and he can’t wait to get out of his shoes and into his y-fronts.

Kate Macer’s FBI team raids a house in Arizona where all the hostages have been killed and stored in the wall cavities. Gruesomely tasty! A booby-trap bomb explodes, and takes out some of her men, marking the end to another glorious day chasing the coke cartel. Next day, Kate is recruited for a mysterious elite team, led by The Dude (or His Dudeness, or El Duderino if you’re not into the whole brevity thing). Dude makes the argument that Kate’s FBI raids solve nothing and will only get more gruesome, unless they attack the problem at its source – the cartels in Juarez along the Mexico-U.S. border.

Kate finds herself in a boys’ club, where the elite man-team of footballers keep her in the dark on mission objectives, while gleefully breaking international murder laws in retrieving a fugitive from Juarez and smuggling him into the U.S. In this tension-soaked, drawn out sequence, we cross the border into a Mexican city where naked dismembered bodies hang publicly from an overpass, where Mexican Federale police vehicles escort the American unmarked cars through the suburbs, our temples thrumming with imminent violence around every corner. Finally, the wound spring ricochets in our faces with the tactically efficient shootout at the U.S. border between the elite force and cartel thugs. To quell Kate’s outrage at all the illegal murders-without-trials-or-representation, Lebowski tells her that as long as the CIA have an FBI ballerina along for the ride (Kate), that makes it okay in some rule book that we’ll never bother to check because it’s bullshit and simply gets filed under Games Grownups Play.

Then there’s the torture. Because – though we make the lemon-sucking face at it – America still – does – torture, no matter what Alberto Gonzales, George W. Bush, or Barack Obama say. Kate wants to capture and interrogate informants by-the-book; what they didn’t tell her was that there’s no better book than John Woo’s Cheney-fied torture memos.

Alejandro tells her, “Nothing will make sense to your American ears, and you’ll doubt everything you do, but in the end, you’ll understand.” Unlike most movies, we are not ahead of Kate, we are mushrooms beside her, kept in the dark and fed bullshit, while all the military hardguys play war games in their ambiguously gay camo pants, outfitted like bondage queens, guns at the ready like prematurely ejaculating cocks, with all that go-go-go-go-go bullshit. And – uh-oh – Asshole Alert!: five black tailgating SUVs.

Eventually, we ask the same question Kate continually asks: What am I doing here? 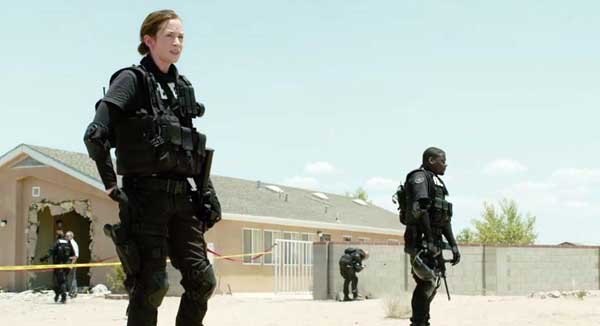 SICARIO is elegantly directed by Denis Villeneuve (PRISONERS, 2013) and beautifully shot by cinematographer Roger Deakins (SKYFALL), sweeping camera elevations giving us a sense of the heat-stroked urban sprawl. On the Mex-American border, constant views of the Great Wall of Republican Hot Button Issues, stretching into the desert heat like a mini Wall of China. And it does remind us a little of TRAFFIC (2000, for which Del Toro won a Best Supporting Oscar). Not so much “orchestral score” (by Jóhann Jóhannsson, THE THEORY OF EVERYTHING) but “disturbing sound design” that leaves us sweat-drenched and seat-edged.

A KPCC radio reviewer opined that Blunt is miscast as the tough FBI op. I found myself concurring at first, but then I realized: she’s not meant to be a Vasquez-type from ALIENS, or even a feminine Black Widow-type asskicker. She is tough in her FBI milieu, but movie rightfully makes her only as tough as her bondage queen military gear – and out of her league in the CIA gayboy choir. She is meant to come off as slight and naïve, so that when men manhandle her, she cannot use her size or skills to thwart them. She is a butterfly in a wasp’s nest, with no allies on either side. If she were more physically powerful, we would not empathize with her as much when she is thrown into the deep end of the pool – with no water in it.

SICARIO is a cool understatement for a movie title. Because the sicario is not the actual subject, biding his time as part of the middle background, an incognito force waiting to be unleashed. The word is never even said. Only in the third act will the sicario come into play, and then – Luca Brasi, Leon, The Wolf, Keyser Soze! In a real world where laws don’t matter, only justice.

An unnecessary story element gives me a hiccup. It is not enough that the sicario performs his job like an efficient machine; debut screenwriter Taylor Sheridan had to add that his wife was murdered and his daughter thrown into acid. Why couldn’t he just be doing it because it is right? Or even just following orders? The disconnect happened for me when Dude Lebowski and Alejandro kept maintaining they are illegally performing a hit on a drug lord because it will stop 10,000 people dying per day. So 10,000 people dying per day isn’t enough motivation? Sicario has to be getting personal revenge as well? For us to connect with him? But if he is an anti-hero, and if the Gutless MPAA have a problem with vigilantism, and if you yourself think vigilantism should just be the provenance of superheroes and not entrusted to governments to wield – why are the filmmakers trying to make us like him so much? Notwithstanding this hypocrisy, the acting is astounding. There is a crucial moment the sicario takes to heave a sigh; magnificent in its execution. And I do mean execution…

So if governments are sanctioning extra-legal hits on drug lords, why are the streets still aflood with drugs? Because the real drug lords are still out there – Pfizer, Roche, Novartis…

Time to hire that sriracha!…