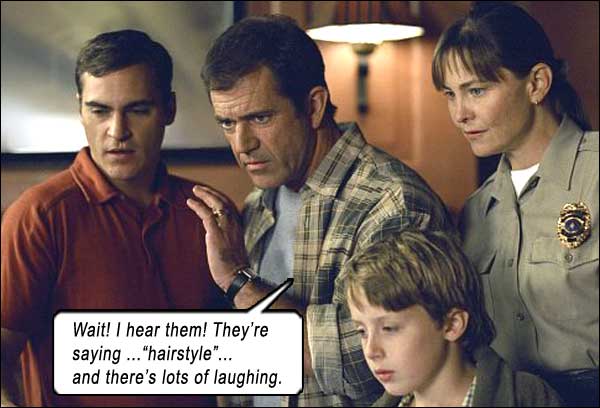 Cream of the Crop Circles.

Don’t let the “alien” thing throw you – like every Night thriller, SIGNS is not of the Running and Screaming stripe, rather, a beautifully crafted lesson in film “making”; creative angles, smart reveals, subtle foreshadowing, tension-filled tableaus, nuanced humor. No frame wasted, no scene superfluous, no Night un-Shyamalaned.

Mel Gibson is widower Reverend Graham Hess, a priest who has lost his faith, one day waking on his farm to discover – crop circles. Resurrecting that grand hoax, Shyamalan comes right out and attributes crop circles to extra-terrestrial aliens. But the aliens are the McGuffin – we only see this “invasion” through snippets on TV news and one chilling scene at a children’s party. SIGNS concerns itself only with Graham’s family and their unbidden involvement in this world-shaking event.

Joaquin Phoenix is Merrill, Graham’s brother, helping him tend his farm and raise Graham’s two young kids, Morgan and Bo (Rory Culkin and Abigail Breslin in sensational performances). These aren’t just “movie kids,” who turn up as props to say, “I love you, daddy,” to illustrate The Loving Father. These kids are bright, cute and exceptional actors. (In the first few minutes we know Graham is a caring father in the way he asks Morgan his first question, “Are you hurt?”)

From the first shots of the kids’ playground through Graham’s bedroom window, Night effortlessly conveys story, and it’s humbling to see how deftly he does it: picture of family on bedside table, man waking alone in double bed (signifying he is tragically no longer with wife); toys splayed outside bedroom door (kids); discolored space on wall in shape of cross (used to be religious – no longer; cross has been removed); to the final 360-degree turn of the camera in this one bedroom, showing us that seasons have come and gone. The whole movie hums with this creative vitality. 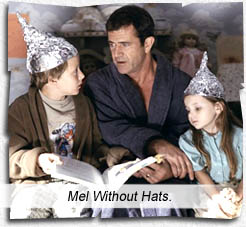 In most films, when a person “loses their faith” it doesn’t mean they have come to their senses – it means they are waiting for some supernatural event to turn them BACK to that faith. Graham stopped practicing priesty things after the death of his wife, run down by a town local that fell asleep at the wheel (M. Night himself, in his usual Hitchcock-ian cameo). Usually a gutless filmic device, Night uses Graham’s loss of faith as part of a much bigger picture, working it as another reference to the movie’s title.

The crux of SIGNS is a foreboding monologue that Graham shares with Merrill, about “two kinds of people” – the type that believe someone is watching over us, and the type that believe no one is. As they watch television reports of crop circles and hovering spaceships appearing throughout the world, Graham confesses his wife’s unnecessary death made him cross over from “someone” to “no one.” Religionists regard this as a tragedy. The only tragedy was his wife’s death. “Losing faith” is the best thing that could happen to anyone in this delusional society – they become responsible for the first time in their lives. What Religionists fail to realize is that if no one is watching over us, we are the rulers of our own destiny. Why imagine some great clockmaker planning our floods, quakes, flat tires and stubbed toes?

We forgive Night these pseudo-theological forays because every scene in SIGNS ratchets the tension higher; Night can conjure fear from the whisper of the wind, a rustle in the cornstalks, a hand groping under a pantry door.

The passive ominousness of crops laying flat shows us we don’t need screaming chase scenes to create excitement, nor knives stabbed through eyes to create horror – all it takes is a shift in normalcy: a shadowy figure on the roof, clicking sounds on a baby monitor, a shin disappearing into foliage.

Every subplot in SIGNS is a sign itself, as it jigsaws into the fabric of the final scene, where the Hess family confront a full frontal alien, left behind after the “invasion” forces abandon Earth. Graham finds that everything his wife said to him with her dying breath attains fruition to save their lives – from Bo’s obsession with leaving “contaminated” water glasses around the house, to Morgan’s asthma attacks, and Merrill’s impulsive cannonball batting arm. “Tell Merrill… swing away!” 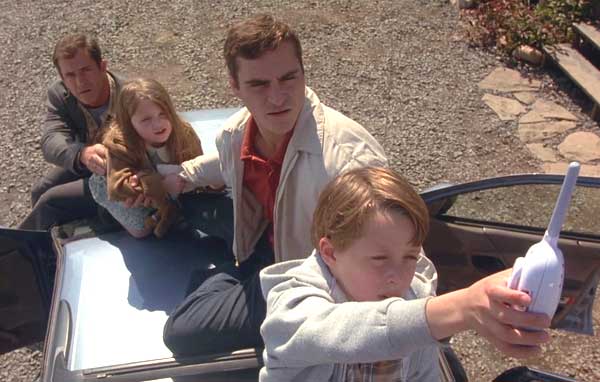 Many people try to find signs, allegories and messages in movies with this tone, but few deride SIGNS for being absolutely bereft of intelligence when it advocates predestination. Graham’s wife, while pinned to a tree by Night’s car, blabbers all the info Graham will need to save his life later, explained away by Graham as “the last sparks of her brain firing arbitrarily.”

You lost me at medulla oblongata.

Predestination negates free will. I’ve said it at least 4,560,670 times. But Christians never seem to get it. Graham actually believes – as many viewers do – that events can be foretold by a dying woman who was fed information by some outside source powerful enough to mind-meld with her (yet not powerful enough to keep the car from hitting her); an outside source with such dubious discernment that it would relate life-saving info through a dying woman instead of simply mind-melding the info into the living people who needed that info. Smart. Graham’s “faith” must have been Church of Nostradamus, or whatever you prophesy weirdoes call yourselves – oh, that’s right: Christians.

But I forgive Night. Because SIGNS suspends our disbelief so artfully even with the contradiction of predestination. The love and closeness of Graham’s family bedrocks their adversity, and the performances breathe beyond three dimensions. What can we say about Joaquin and Mel? Both have wells of emotion so deep and nuanced, it makes us wonder why their shelves are not creaking with Oscars.

As one day, M. Night Shyamalan must surely be recognized by that insular, backslapping academy. All they need is a sign.