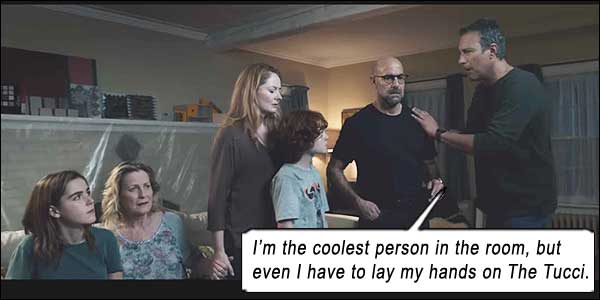 You speak. You die.

A deaf girl and her family must survive a holocaust brought on by blind monsters that track their prey using sound alone. Didn’t they just make this movie and call it A QUIET PLACE?

When TOMBSTONE (Dec 1993) is followed by WYATT EARP (Jun 1994), when DANTE’S PEAK (Feb 1997) is followed by VOLCANO (Apr 1997); when PAUL BLART MALL COP (Jan 2009) is followed by OBSERVE AND REPORT (Apr 2009), Hollywood calls it synergy, but we know what it is – stealing. Another euphemism is plagiarism. But in the end, someone stole someone else’s idea. And made enough little tweaks in the final product so that they couldn’t be taken to copyright court.

THE SILENCE is told from the point of view of Ally (Kiernan Shipka, 20 years old, square-jawed, Hermione redux, with magical chest buds!); she lost her hearing in an accident, so her family “deaf signs” when interacting with her. (This aspect alone is quite amazing; it seems to be all the rage in modern movies – QUIET PLACE and 2019’s SOUL TO KEEP utilize sign language extensively. Tucci (as dad) and Miranda Otto (mum) sign the most, though all the characters, including Shipka, do quite an authentic job.) John Corbett (MY BIG FAT GREEK WEDDING 2, 2016) is Uncle Glenn, that cool friend we’d all like to have, like Timothy Olyphant or Sam Rockwell; he’s the muscle behind Tucci’s empathy.

The great Stanley Tucci is perfect as a silent patriarch; so expressive, so empathetic! How do we describe this man’s artful underplaying? His most intense scene involves sacrificing their big stupid noisy Rottweiler that will not stop barking at the sound-creatures and drawing them to the car. It’s Abby’s dog. And amid Abby’s tearful screaming, he releases it to the outside melee to buy the family some time. And it dies! I loved this scene because for the first time in a Hollywood movie, the dog was thrown out of the car instead of leaping to safety into it. It was either the dog or them. And isn’t this always the case anyway, even when the dog is saved? Because for the dog to leap to safety, the family has to delay running from danger to wait for Fido. Thereby putting the family at risk for the sake of the dog. It worked the other way round at last! Even if the movie turned out to be a dud, this scene alone, with Tucci’s performance, lent it sky-high cred – with me at least!

There is even a scene of passengers in a train throwing a lady with a crying baby out of the carriage; even this sacrifice was not as good as seeing the dog get it!

The movie meanders with the family to a farmhouse (which they acquire through dubious means), then into the deserted town to get supplies amidst the creatures prowling, eventually being at odds with an ominous priest (Billy MacLellan, who looks like a grown Peter Dinklage) and his cult of nutters who want Abby for procreation purposes.

When the creatures are attacking his family in a drainpipe, Tucci does an ingenious thing – he runs an industrial shredder nearby – and the creatures fly into it and come out as mulch on the other end. A thing that makes noise, that the creatures are drawn to, which kills them… Isn’t that a good way to get rid of them all? Why did he even stop the shredder? Ran out of petrol? So no humans – even those on farms – thought to run a whole bunch of shredders? Problem solved. Earlier, Tucci set a car on fire – a roaring fire – which simultaneously attracted and killed the creatures as well. Let’s face it, there are more things in this world that make noise and cause death than there aren’t, so basically anything that makes a giant noise could also be a deathstroke to those creatures. Ignore. Onward…

Peter Dinklage stands on a chair and asks for The Tucci’s autograph.

It also occurs to me that if these creatures are blind and don’t have some form of sonar, how do they not crash into everything that doesn’t make a sound, like buildings, lampposts, trees? And how do they land on different levels, like in a forest where every single branch is at varying heights? How do they fly into that pharmacy and land on TOP of the shelves? They’re blind. How do they know the shelves are that height? Okay, so let’s say they have sonar – then they could “see” the movement of prey. So the story can’t have both things – telling us they’re blind AND being able to fly anywhere precisely.

Apparently, the creatures were unwittingly released from a subterranean cavern where they evolved into this species, which the media calls Vesps, which is the stupidest name anyone could think of. Small bird-bat creatures with heads like Alien, represented with good CGI. (The creatures from QUIET PLACE are human-sized extraterrestrial aliens, and resemble Clover from CLOVERFIELD – whew! – lawsuit averted!) “Evolution” is a subplot, once again mishandled by director John R. Leonetti and screenwriters (Carey Van Dyke and Shane Van Dyke) because they, like most people, understand evolution at a kindergarten level. Abby’s final narration is pure horseshit, as she shoots a fatal arrow at a Vesp tending its eggs – “Let’s see who evolves first.” Well, single organisms don’t evolve, honey. You don’t measure evolution in one generation, and it’s certainly not because you learned how to shoot a bow and arrow. That’s not called evolution, honey; that’s called learning how to shoot a bow and arrow. Just because you look the hottest you’ve looked in the movie, with longer hair and perfect features – and wielding a bow – don’t gaslight me, baby!

The greatest problem that this movie glosses over is the quantity of Vesps. Story makes such a big deal out of these creatures that hunt by sound, as if that is the worst possible way to be hunted, and therefore, the human race was easily wiped out. But can you think of another creature that hunts by sound, but also by smell, and also by sight, and by stealth, utilizing all these aspects to hunt you and kill you quicker than any Vesp?

Now why haven’t lions overrun the world like Vesps? Because of a natural barrier in the ecosystem called predator-to-prey ratio. You can’t possibly have that many predators, as portrayed in this movie, because there has to be enough prey to sustain them. Too many predators and they start dying off to a manageable level, ending up with only a few predators per hundreds of miles of their hunting territory. You might argue, ‘But this is the explosion of predators before they get culled down to a manageable level.’ Wouldn’t happen. Can’t happen. How did they get to this quantity if there was not enough prey to go ‘round in the first place? What the hell could they have been eating in such voluminous supply down in that subterranean cavern?