SILVER LININGS PLAYBOOK is a teachable moment in filmic history. They showed us how to cure bipolar disease. You just need to get laid! 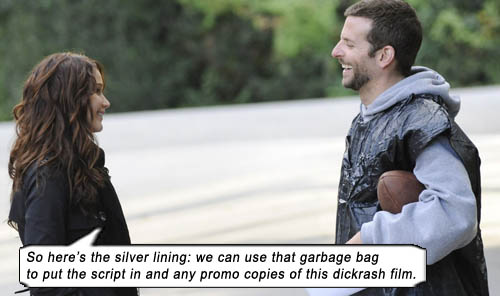 Two damaged people Meet Cute. They pretend to hate each other. By movie’s end, they love each other, which apparently means they’re not damaged anymore. Yay. All it took was sex.

SILVER LININGS PLAYBOOK is the single most overrated piece of romantic crap that I stepped in because other people were stepping in it and saying how nice it tasted through their shoes. Sure, gutterloads of frilly romcoms assault us weekly, but none so pretentious. Due to this movie’s plot revolving around bipolar disease, it acquires Oscar cred. And Oscar cred apparently connotes High Art, rather than Chick Flick bullshit. You lost me at White American Heterosexual Couple who should just screw and get it over with.

Mantoy Bradley Cooper is Patrick, bipolar, just out of hospital, lost his job, wife, house, moved back in with parents Robert De Niro and Jacki Weaver. His temper is on a hair trigger, his meds intake erratic, his filters non-existent, as are his social skills. Manically believing that bettering himself by reading Hemingway and losing weight and looking for the “silver lining” in every situation will endear him to his adulterous ex-wife, he is painted as crazy. And he is. We all know crazy when we meet it, even if you euphemize it as “bipolar.” And Patrick is crazy. But – so the movie tells us – Patrick becomes Not Crazy after The Sex with Jennifer Lawrence.

Lawrence is Tiffany, recently widowed, and with such low self-esteem that she banged the whole office after her husband’s death, even the women. She says she doesn’t do that sort of thing anymore, but it’s a part of her that she accepts and likes. I like that part of her too. Wanna get a drink sometime, Jennifer? That raven hair, those dark, dark eyes; swiveling that sexy little botty during her dance routine. So cute, the way she keeps darting out from behind a tree, to jog with Patrick – “Hey–!” That kills me!  And those cheeks! I just wanna pinch em pinch em pinch em PINCH EM! And the ones on her face are pretty cute too.

Tiffany also has no filters, which she construes as “being truthful” (which is correct), is well-acquainted with meds, and is as socially inept as Patrick, yet though she was previously married to a cop in a stable loving relationship until his death, now she is attracted to loser Patrick. For no reason other than the script says so. He’s a bad catch (bipolar, no prospects, unpredictable, unreliable), so her stalking reaction to him must be because he’s hot. But is a character in an Oscar film allowed to be that shallow? Or are we meant to regard her irrational pursuit as True Love? Then it’s okay to be a stalker. Meg Ryan tells us so in FRENCH KISS (and every other execrable piece of dogshit that she calls romantic comedies). Or are we to assume that Tiffany is still obsessed with casual sex to satiate her demons when she tells Patrick, “You can fuck me if you keep the lights off”? And – by your own judgment – isn’t casual sex a Bad Thing?

I know why *I* love her – because I like casual sex and I like sluts. And those cheeks. But that’s not what MAINSTREAM SOCIETY likes. Is it? Do you? Then why do you like this character? Are you vicariously living your own wet dreams through her? Shut up, hypocrites!

It’s not that I dislike PLAYBOOK. The film is funny in odd places, and the performances from the stars are stellar, as can be expected. Even the B-players are all reliably solid: Paul Herman (BEANSIE from THE SOPRANOS) as De Niro’s compulsive gambling buddy, Julia Styles as Tiffany’s sister, Paul Ortiz as Julia’s henpecked husband, Chris Tucker as Patrick’s friend, another patient from the hospital, constantly trying to escape. The only miscasting seems to be Dash Mihok as a policeman, that turns up whenever and wherever he’s needed to quell disturbances (shyeh, when has that ever happened? I mean, this guy is on duty 24/7 keeping tabs on Patrick, whether it’s a family disturbance at 3am or a Sunday football game). But PLAYBOOK doesn’t go nearly deep enough to warrant its claim as a beacon and boon to bipolar people; that for those who feel alone or depressed, they can take heart that someone out there understands their predicament. Well, someone out there just might – but it ain’t the filmmakers of PLAYBOOK.

De Niro’s character is supposedly obsessive-compulsive, and arranges his remote controls and folds his hanky a certain way, and believes son Patrick is a good luck charm for his football team. That’s not Obesssive Compulsive Disorder – that’s arranging your remote controls and folding your hanky and being a superstitious clod. Try dating someone with OCD and then get back to me on your understanding of it.

Which leads us to: Do the filmmakers know what ‘bipolar’ really is? Writer-director David O. Russell (from the book by Matthew Quick) plays Patrick’s situation like a fish-out-of-water tale: Pat’s back from the hospital too soon and trying to fit in with normal society again. Wackiness ensues.

Telling tall tales and having a tripwire temper, and going to jail for petty disturbances and having a cop check in regularly doesn’t mean you’re bipolar. It means you’re a fuckup. But waitaminute, you say, that describes ME. But I’m not a “fuckup”… okay, let’s go with the euphemism… I’m BIPOLAR! Yay. Soooo socially acceptable.

And here’s where the bipolar express really leaves the rails: final scene shows an idyllic Sunday afternoon at Patrick’s household, parents, friends, Patrick and Tiffany in a cutesy embrace; there is not one shred of indication that Patrick and Tiffany are in an ongoing battle with their ids, their antisocial personas. For all intents and purposes, the movie paints a rosy picture of everyone being normal. And why? Because Patrick and Tiffany are an item. So that’s all it takes? The movie spends two hours setting up bipolar and OCD and self-esteem issues as the obstacles that these youngsters must overcome to find each other, then in its final frames, it tells us those obstacles were easily curable if only the youngsters overcame the biggest obstacle – taking down each others’ panties. Cos apparently that cured not just them, but everyone acquainted with them!

But Tiffany has a problem so deep rooted that as soon as she believed Patrick was not with her psychologically, she turned to drink and a quick lay. She did this at THE most important moment of their lives up to that point. What’s to say she won’t do it again when she feels him drifting? And Patrick’s temper is supposedly so out of control that he can’t be trusted not to get into a fight at a football match. Both of them have no filters when we meet them. Are we to believe that they have now suddenly grown filters on their big mouths? If you rationalize that both their anti-social behaviors were only manifest because they were still seeking their soul-mates, that in itself is an argument against their supposed serious conditions of bipolarity. That way lies the kingdom of fuckup. Not clinical depression or bipolarity or obsession.

So you know those times when you hit the roof and throw things at the wall and one of your friends says, “Dude, you need to get laid.”