Call of the Simpsons.

SIMPSONS fans will no doubt love it and pet it and call it Krusty. Newcomers will laugh and marvel at this old-fashioned “cartooning” thing.

THE SIMPSONS MOVIE is pretty much a SIMPSONS television episode. No better, no worse. Just longer. 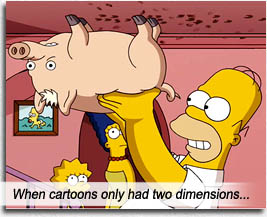 Which means it is very good – but we are left pondering the fiscal wisdom of turning this longest running American sitcom ever (first aired Dec 1989) into a feature film that plays like a TV viewing without the pee breaks.

Sure, it has Emmys and Peabodys littering its shelf, but will the built-in SIMPSONS audience bother to get off their indented couches to pay for what they could easily view free on any given weeknight? Let’s face it, for Homer Simpson to have attained such national treasure status, he must resonate with viewers… i.e. they’re probably more like him than they’d care to admit…

What Would Homer Do?… D’oh!

Though Trey Parker’s and Matt Stone’s SOUTH PARK has long usurped THE SIMPSONS as the zenith of biting political and sociological satire, THE SIMPSONS MOVIE tries its best to bite back, aiming at a tender societal bone – the environment. 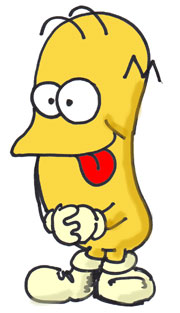 Dan Castellaneta (voicing Homer and a host of others) leads the regular voice cast (Julie Kavner, Nancy Cartwright, Yeardley Smith, Hank Azaria, Harry Shearer, et al) in a tale about the city of Springfield going “green,” to the point of going Orwell, the Environmental Protection Agency eventually sealing the town in a giant dome for Homer’s polluting transgressions. Brought about by Homer’s newly adopted Spider Pig. “Spider Pig, Spider Pig; does whatever a Spider Pig does…”As he caused the en-doming of Springfield, it falls to Homer to free the town with some inspired accidents and contrived character arcing.

Created by Matt Groening, written by – well, everyone – and directed by David Silverman (co-director, MONSTERS, INC., 2001), unlike Trey Parker’s and Matt Stone’s SOUTH PARK: BIGGER, LONGER AND UNCUT (which stepped up from its episodic feel and made a hell of a feature film) THE SIMPSONS MOVIE finds Bart, Lisa, Marge Simpson and all the other much-loved denizens of Springfield trapped in episodic hell, business as usual.

No better, no worse. Just longer.