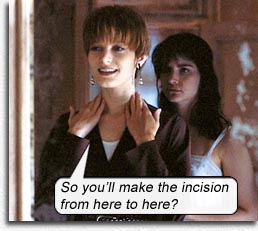 But seriously, who wouldn’t stalk Bridget Fonda? In this psychological thriller, she’s the luscious Allie, the SINGLE WHITE FEMALE, stalked by boxy Hedy (Jennifer Jason Leigh, who was once carnally delicious – FLESH AND BLOOD, 1985 – but has never again attained that “I’ll take you, soldier!” sluttishness).

Square-jawed Allie has just broken up with her cheating boyfriend (Steven Weber) and needs a roommate to help with the high New York rent, so runs an ad, broadcasting her SWF status. Hedy moves in on the strength of her down-to-Earth compassion.

Then everything gets pear-shaped (and I’m not talking about Bridget’s bottom). And that’s before Allie’s boss (Stephen Tobolowsky) tries to rape her pear shapes…

Ladies, if there’s a lesson to be learned from this movie, it’s: Don’t Trust Men. Oh, and don’t trust women either. Matter of fact, the only trustworthy person in this movie is the gay guy (Peter Friedman).

It’s a pity Fonda stopped acting after 2002, because her penchant for going bottomless was much appreciated by the male populations who loved pear shapes.