Less Sinister than before…

With no stars to speak of, a vanilla leading man and a leaden story, SINISTER 2, the unfocused sequel to 2012’s SINISTER (starring Ethan Hawke) relies on jumpscares and morbid deaths to register any heartbeat at all.

The Deputy from SINISTER (mourning-faced James Ransone) is traveling the United States, burning down the houses where the supernatural Bughuul possessed kids to commit atrocities on their families. At one house, he finds mother Courtney (Shannyn Sossamon) and her two sons, squatting, in hiding from her abusive husband.

The two boys are regularly visited by ghosts of dead children (led by Lucas Jade Zumann), who all murdered their families in creative ways and filmed the murders with 8mm shaky-cam (I’m still wondering who did their magnificent lean editing – maybe Bugoo?) They’re on a quest to entice young Dylan (Robert Daniel Sloan) to do the same – murder his family creatively and film it. But Dylan proves too strong-minded, and the enticement works instead on weak-minded brother Zach (Dartanian Sloan), who will definitely be wearing a MAGA hat the minute he’s old enough to vote for an imbecile.

Writers Scott Derrickson (who directed the first one) and C. Robert Cargill, with director Ciaran Foy, try to ground the movie in gravitas by having a priest poo-poo a confessor’s idea of exorcising evil, “You think you can sprinkle holy water and shout, ‘The power of Christ compels you’?” – But I don’t get where you’re coming from, Priest. Your whole ethos revolves around a fantasy from the get-go, so how is ANYTHING more silly than anything you believe right now?

Underneath the insipid, trope-laden ghost story – with many cameos by Bughuul – there’s a real horror – the story of a woman and her kids powerless against her abusive policeman husband. He’s got the cops on his side, so he can send out private dicks to tail her, turn up at her house illegally with squad cars to terrorize her and the kids, and then eventually physically drag them all back to his home to live with him, all with no lawful repercussions. Raping her is par for the course. The filmmakers didn’t count on this common real world predicament being much more compelling than the fantasy tale of a ghost who looks like The Crow forcing kids to kill families for him. 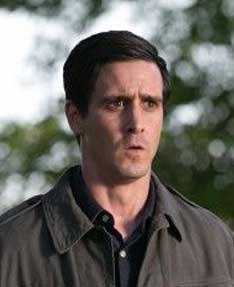 The main reason SINISTER 2 fails is that the supposed leading man looks like Elias Koteas doing Concerned Face #9. James Ransone worked well as the B-character to Hawke’s leading man in the original movie, where he ran the gamut of Concerned Faces, from #1 all the way to the difficult #17, but how is he expected to carry the sequel by doing Officer Doofy from SCREAM 3?

When Doofy accidentally discovers Courtney and her kids living in the house he intends to torch, so begins a sallow, non-chemistry romance between them. When Courtney’s alpha-male husband (Lea Coco) comes a-calling to remand the boys into his custody, Doofy fends them off with legal mumbo-jumbo, in the cringiest scene of the movie – because he is a watery excuse for a knowledgeable, powerful protagonist. The only reason the husband backs down is because the script says so – Doofy doesn’t convey a shred of authority. Nonetheless, Courtney is fearful and asks him to stay the night on the couch. Now an invitation from any woman to stay the night – whether on the couch or in the guest house – usually means there is a slight chance she may flounce downstairs in a diaphanous gown – some peekaboo thigh, a nip-slip, and we’re off to the races… But with Doofy, we feel there is ABSOLUTELY NO CHANCE this scenario might ever happe—

Wonder of wonders, here she comes in a diaphanous gown. They go out on the porch and get giggling drunk on half a bottle of beer, “innocently” touching thighs and arms, until – that kiss, lacking any passion, heat, lust, animal magnetism; like kissing your sister.

In all the ghost kids’ films, we see their families strung up in ways impossible for those slight kids to manage. When Zach eventually progresses his massacre, he starts to film his handiwork – Dylan, Courtney and Husband all tied to elevated crosses, bags over their heads… but how did he get his 350-pound father up on that cross?

In this finale, instead of burning all three of his family at once, he lights a fuse to his father’s cross first, who conveniently dies so that Courtney’s passionless sister-brother relationship with Doofy can blossom after the outro credits.

Doofy crashes into the clearing, like a leading man or something, and rescues Dylan and the cheap drunk.

When Bughuul makes a final cameo, slamming his head into frame like some kind of comedian, I laughed. I think that was the correct reaction.