How ’bout turning on a freakin’ light?!

SINISTER is a well-made and effective horror movie, so we expect a certain amount of darkness, metaphorically and literally, but has anyone heard of Thomas Alva Edison around here? Formulated the modern electric light bulb in 1879 – and I’m sure the Department of Water and Power is pumping that magic electricity into that big, rambling house where everyone is walking around like idiots who don’t know what a light switch is. 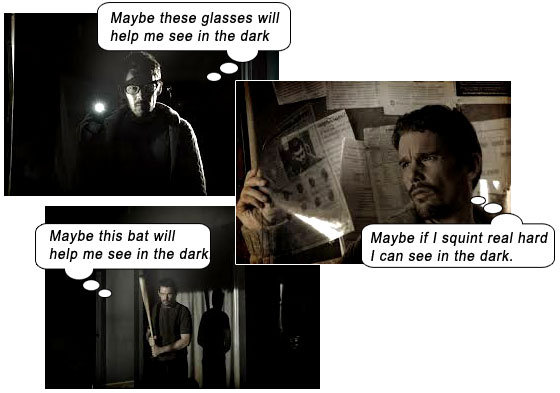 A family moves into a house where serial murders were committed. To all those acclimated with the Horror Movie Flow Chart, do I really need to say any more?…

Ethan Hawke is True Crime writer Ellison (named after my favorite author, Harlan Ellison – at least, that’s how I’m reading it), who moves into the aforementioned rambling house to get a sense of the murders that were committed there, for his next book. Trouble is, he hasn’t told his wife (Tracy Rylance) or kids (Michael Hall D’Addario and Clare Foley) why they’ve moved into this house. And he presumably hasn’t told them where the light switches are either.

Wife finds out from the crusty old Sheriff (Fred Thompson, exhibiting more energy in one key cameo scene than he did in his whole presidential campaign), who warns Ellison that he don’t take too kindly to big city writers in his small town. And he especially don’t like it when they walk around in the dark so much. His deputy, on the other hand (James Ransone, a low rent Luke Wilson) is starstruck by Ellison and winds up giving him access to police records and looking up obscure murder references. But he never actually finds what Ellison was seeking most – the light switches.

Ellison finds a box of 8mm home movies that show families being murdered, and starts viewing them obsessively with a bottle of scotch by his side. Now was that due to his pissed-off wife? Not getting any for days will turn a man to drink – and viewing 8mm snuff films (take note, ladies). He discovers footage of the previous occupants of the house being hanged slowly, in a very chilling silent sequence, where a sawed-off tree limb acts as a weight to pull all the ropes tight around the hooded family’s necks, dragging them into the air together, one of the figures kicking impulsively as they rise. (Seems like a perfect solution for the U.S. do-nothing congress, but I digress…)

Ellison realizes that this house did not only harbor one serial murder, but a feast of murders all documented on these innocuously-labeled tapes: Pool Party (which actually means mass-drowning of a family), Lawn Work (which means – well, you can guess what happens between a trapped family and a lawnmower), and so on. In each film, he begins to discern an unclear entity – a figure NOT there the first time he viewed the films, a figure which becomes more and more apparent every time he runs the films!

Ethan Hawke looks scared all the time anyway, so when the classic horror tropes start to fall neatly into place, he can only look more and more like the perfect casting choice: loud noises in the attic, a film projector playing on its own, doors unlocked by themselves, the entity appearing during orchestra stabs, and of course, walking around in total darkness like an idiot.

As good as SINISTER is, it uses that silly horror movie device that takes us out of the movie completely. I mean, this guy aggressively doesn’t turn on the lights – he opts for his cellphone, a flashlight, or just plain darkness. Why? Rationalizations abound – maybe he doesn’t want to wake the kids, maybe he doesn’t want to alert the burglar that he thinks is in the room, maybe he just wants to annoy me.

Directed by Scott Derrickson (EXORCISM OF EMILY ROSE), with producers from PARANORMAL ACTIVITY and INSIDIOUS, so the movie boasts a certain inherent flare for scare. Lighting is excellent, not in the sense that characters don’t turn on lights when they should, but when it is dark, it is truly dark, not “movie dark.” Night scenes seem like real night. The unnerving chills are aided by an eerie, discordant soundtrack by Christopher Young; not exactly instruments, but a combo of elements used to create sinister ambience.

Ellison discovers the entity is named Bughuul (or Mr. Boogie, by some of the unfortunate kids). Once we arrive at this Explanation Protocol (elucidated by Vincent D’Onofrio, no less), like all good horror movies, SINISTER fails to retain its otherworldly ectoplasm. “He eats the souls of children.” Really? With a side of fries? What’s the nutritional value of a child-soul? How much energy can be obtained in kilojoules, to keep a ghost going for how long? And we realize that there are scarier things in the world than an entity that kills merely a few families to eat their non-existent souls – there are those misshapen, blood-craving monsters that kill people by the hundreds of thousands by their inaction, malfeasance and misdeeds: the U.S. do-nothing congress.

Suddenly, a light goes on above your head. But it’s too late now, you already voted those dickheads in…