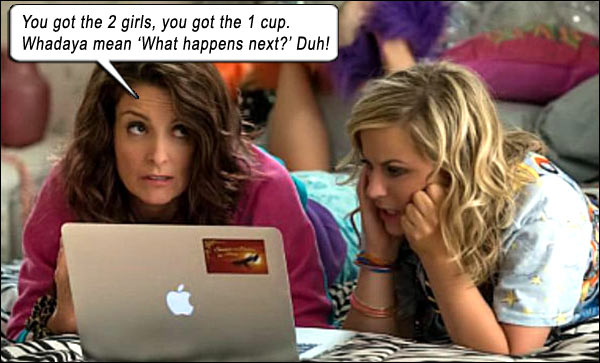 The BACHELOR PARTY of ladydom.

Two adult SISTERS, Kate (Tina Fey) and Maura (Amy Poehler), throw one last party in their childhood home before their parents sell it. One sister needs to prove she is responsible. One needs to get laid.

The party gets out of hand soon enough. WAY out of hand. Which make the party scenes reminiscent of Tom Hanks’s hilarious 1984 bachelor bash. However, writer Paula Pell and director Jason Moore have augmented the sheer lunacy with a family’s dysfunction that needs to be reconciled. Both Kate and Maura are damaged in their own ways – ribald Kate an alcoholic, rudderless single mother, and cautious Maura recently divorced and clingy. You can bet all these psychological noxae will be addressed more efficiently than in any shrink session, during the time it takes to burn the ganja, drain the keg, fall through the roof, knock down the tree, and extract a ballerina music box from a guy’s ass…

James Brolin and Diane Weist are the parents, exhausted in dealing with the foibles of the two sisters, just aiming for a little quiet time to “day-bonk.”

Who woulda thought Ike Barinholtz (MAD TV) could pull off a romantic leading man? He’s always been an insipid to strong B-character (I especially note his role in NEIGHBORS and his delivery of the best line of that movie in an inappropriate singsong voice: “Rape.”) He’s Maura’s manly love interest, and though she is awkward in her advances on him, he plays it Cool Mc-Cool and adds a solid role to his resume.

John Leguizamo’s talents are wasted as Kate’s ex-boyfriend; Maya Rudolph is the troublemaker; Greta Lee brings the youth demo; Chris Parnell has never been funny in anything (correct me if I’m wrong, but I’m pretty sure he has stolen that crown from Kevin Nealon); Kate McKinnon is underused with only one line; John Cena is imposing and funny as Pazuzu the drug dealer; the great Samantha Bee is also underused as a drunk wife who walks around with only her bra on; and SNL’s Bobby Moynihan is desperately desperately DESPERATELY trying to be Chris Farley (someone please tell him it’s okay to dial it down to a Kevin James and still be just as irritating).

Cameos and bit-parts are often high points of movies (and SISTERS includes many SNL alumni and friends from other shows – Kate McKinnon, Rachel Dratch, and notably Jon Glaser aka Councilman Jamm from PARKS AND RECREATION who unfortunately doesn’t get to jamm), but this neurotic comedy is held up solely on the shoulders of Tina Fey and Amy Poehler, who have always worked so well together, never scared to go the extra mile to look unsexy for the gag (even though Fey is disarmingly hot, with that straight mouth and bedhead hair). The best female comedians of their generation. Truly sisters in comedy.