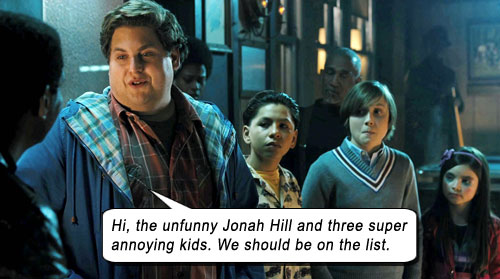 Somewhere over the pain flow.

Jonah Hill as the Wizard of Oz!

Of course, that’s not the true quasi-poignant theme to this scattered, poorly-directed mess of stunted action and unrealistic characters, centering around reluctant babysitter Noah Griffith (Hill). There’s a drug dealer (Sam Rockwell), gangstas (Method Man and Samira Wiley), Noah’s mum (Jessica Hecht) trying to get MILF-love, and Noah not getting any reciprocation from the blonde he is blowing (Ari Graynor; she played Caitlyn on THE SOPRANOS), while a hot high school acquaintance inexplicably falls for Noah (Kylie Bunbury)… Of course, since the kids are in almost every scene, that whole reconciliation with their inner demons might be the theme. I can’t tell because of the scattered, poorly-directed mess of stunted action and unrealistic characters.

Landry Bender is the little girl who believes that being a celebrity is the apex of existence, so splotches on her mother’s makeup to emulate the Snookys and the Hiltons – like every Snooky and Hilton, she needs A BRAIN.

Adopted Mexican Kevin Hernandez plays the unloved third-wheel kid whose perceived alienation drives him to set off homemade bombs in public places. He’s yearning to feel a part of the white family that adopted him – he needs A HEART.

And when Noah sees young Max Records gazing longingly at two guys touching each others’ hair in a train, he realizes Max’s pentup frustration is that he’s gay and too young to know – like the Cowardly Lion, Max needs THE BALLS. In his face.

Now I’ve just compressed the badly-written script (Brian Gatewood, Alessandro Tanaka) into a cohesive thematic arc. It comes off nowhere nearly as neat when the film is being watched. It’s a confused, knock-down, car-chase, run-scream-dance escapade that fails on nearly every level. Maybe the director of the execrable YOUR HIGHNESS (2011) had something to do with that – David Gordon Green. Then how did Green ever manage the very funny PINEAPPLE EXPRESS (2008)? He needs another visit to the Wizard of Drugs.

Without a good script, Jonah Hill is not one of those comedians that can just turn on the fat guy charm and save a movie. He has the talent to work a well-written comedy, like SUPERBAD or GET HIM TO THE GREEK. But with THE SITTER, he’s not in Kansas any more, Toto.