Never gets off the ground.

If you enjoy dreary, talentless non-actors delivering lines in a bland monotone over a plot that goes from Point A to Stop Making Sense, then Coleman Francis‘s THE SKYDIVERS is your cup of tea, er, coffee. 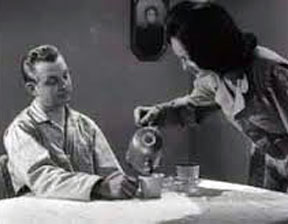 Kevin Casey is Beth Rowe, who runs an airfield whose prime attraction is coffee and skydiving. In that order. Her husband is pilot Harry (played by the man who won the award to pose next to the word “morose” in the Oxford Dictionary, Anthony Cardoza). Eric Tomlin plays Harry’s war buddy, Joe, who joins the airfield and ends up “having coffee” with Harry’s wife.But Harry isn’t a good boy by any means, having an affair with a chick who looks like a cross between a meth-head and another meth-head, Suzy (Marcia Knight). Suzy gets jealous of Harry’s wife and beefsteaks a weird-looking surfhound (Titus Moede) into conspiring to off Harry by pouring acid on his parachute.

Meanwhile, while nothing is happening, some twitching wacko has jumped to his death without pulling his chute, which has the FAA crawling all over Beth’s and Harry’s airfield. Well, if one suited guy saying, “Don’t leave town,” is considered crawling.

Then a bunch of guys jump in some sort of homosexual combo, then a band plays metal surf jizz, then all the airfield staff does a night jump for the amusement of a crowd of listless maroon-necks. (This night jump is troubling to me as a sensible, thinking person: firstly, writer-director Coleman Francis is shooting day-for-night, so why does it particularly have to be staged as a “night jump”; secondly, the skydivers have NO lights or showpieces on them; it’s not like they’re trailing fireworks or anything spectacular to make it worthwhile as a jump in darkness. All that anyone would see if it was a real night jump is… well, black sky. What’s the point? Many men greater than I have asked that same question and failed to answer it…) And Harry’s holey chute opens and drops him like a lover with herpes. It’s high drama. And by high, I mean 20,000 feet.

As a point of interest, all three Coleman Francis-directed monstrosities (SKYDIVERS, NIGHT TRAIN TO MUNDO FINE aka RED ZONE CUBA, and THE BEAST OF YUCCA FLATS) have been featured on MST 3K.

Coleman Francis cameos as a gunman in a plane shooting at a car. Who he is, is unimportant. Why he’s shooting at the car, also unimportant. It just so happens the car is driven by Surfhound and Suzy, who are trying to escape town after killing Harry. How Coleman discovered it was they who poured acid on Harry’s chute not ten minutes after Harry became a corpse is beyond the ken of mortal men. Shoot first, piece it together later, which just so happens to be the way Coleman Francis makes his films. So it all works out in the end.