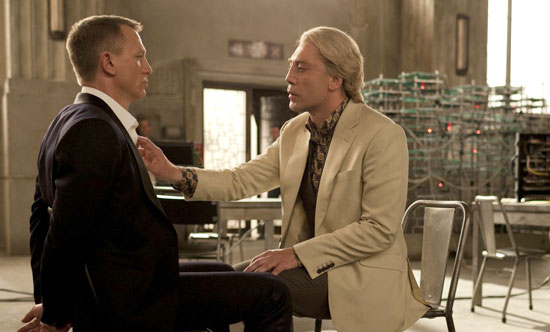 We can tell this guy is gay from the complexity of his nipple-ball-torture machine in the background.

James Bond returns in SKYFALL – and is immediately killed…

Trending in movies: heroes do not just fall – everything they know is compromised; everything that makes them a hero is called into question. They fall from the greatest height possible (is this the play on words in sky fall?), to make their rise all the more sexy (as in THE DARK KNIGHT RISES). In SKYFALL, Bond’s threat is no longer just a platonic baddie who wants to rule the world while guffawing bwohahahaha, but one who robs Bond of the very support structure that defines him as the hero, including belief in himself. 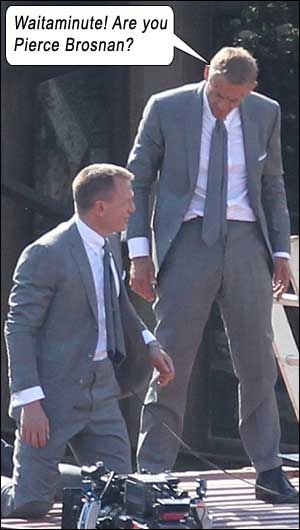 Daniel Craig‘s third outing as James Bond 007 starts with a car chase… Uh oh, that’s how QUANTUM OF SOLACE tripped over and smashed its face on eyestrain. Car chases are the drum solos of movies. No matter that Craig is still bringing that steely-eyed raptor intensity to his portrayal of Bond, how can director Sam Mendes keep it vital and interesting? Oh Jesus! – you didn’t have to shoot Bond to do it…

M (iron lady Judi Dench, head of the spy agency MI6) gives the order to shoot at the assassin who is grappling with Bond atop a moving train, calculating the risk of the assassin’s escape versus Bond’s death. She loses her gamble, and Bond is off the grid for months…

The hero incapacitated, his boss doubting his skill, his life, once an action-fest and pussy-stampede, now degenerated to the dreary shadows of an Istanbul hovel. Oh, there’s still some stampeding, but done in that bitter perfunctory way. But what the hell, pussy-stampeding is like ice cream – even when it’s bad, it’s still pretty good.

Of course, Bond must rise. And rise he does – but not in the heroic way we would imagine. M is accused of failing at her job and asked to retire (by department head Ralph Fiennes), and MI6 is attacked; in this techno age, SKYFALL also uses that now age-old device of a disk gone missing with sensitive information. (Can anyone say McGuffin?) So Bond must return to set things right. But he is forced to re-take the entry level tests that every secret agent must take to gain their License To Kill. He fails! M does not reveal these results to Bond and sends him out into the field anyway, to apprehend the ex-agent who is causing all the trouble, Silva (Javier Bardem, delicious as a depilated sphincter).

Many Bond Villains, if not all, have been fey (Blofeld, Le Chiffre, Drax, Elliot Carver), but Silva is the first to be aggressively GAY, openly flirting with Bond and, I’ll wager, the first to touch Bond like that while Bond is bound. Silva shares a bond with Bond, in being another agent whom M discarded. We’ll explore that in a moment… 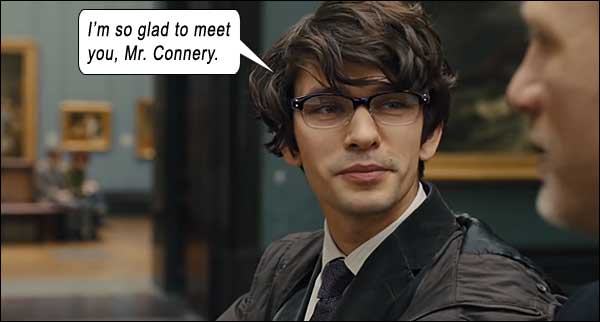 There’s a new Q (Ben Whishaw, in a role owned by Desmond Llewelyn until John Cleese took over in 2002’s DIE ANOTHER DAY). Whishaw is boyish with mannish aspirations, doing a brilliant job portraying someone assimilating into the espionage game as a hacker instead of a field agent. He drops sly allusions to the older, dated films, “Were you expecting an exploding pen? We don’t really go in for that anymore.” (Also, Whishaw reiterates what his Q stands for – “Quartermaster” – for those who missed the explanation back in the early James Bond days when the Wright Bros. were discovering flight.)

There are nods to canon in humorous, winking ways: the new Q, the new M, the new Moneypenny, and Bond’s infamous Aston Martin makes a comeback, replete with guns in the front bumpers!

Naomie Harris (the new Moneypenny) gets to shoot Bond and Bérénice Marlohe gets to show off her hourglass body as this episode’s The Bond Girl. 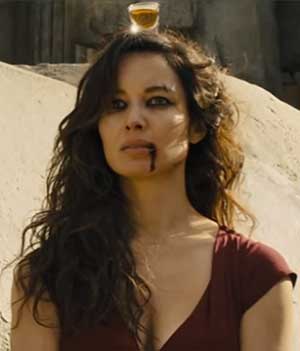 Some psychological plotholes undermine this pretty powerful exploration of Bond as a man rather than a superhero. The fact that both Bond and Silva were both used and discarded by M says something about both men when we examine their reactions to M’s emasculation. Bond slides back into the system that demeaned him, while Silva seeks revenge. No matter how traumatically M might declare her decisions were made to discard both men on the grounds of protocol, the decisions were ultimately made. It stresses Bond to the point of performance anxiety – he fails his tests. But M puts him in the field anyway, lying to him that he passed – once again dishonoring him as a man! And Bond goes along for the ride.

Does this make Silva the better man? (Well, we already know he’s a MAN’S man.) Is he more “honorable” by extricating himself from the system that would emasculate him, knowing that to forgive would simply open himself up to more dishonor? As proven by Bond’s situation. Silva’s revenge on M is made all the more consistent when he doesn’t just shoot her while sniggering like Snidely Whiplash, but embraces her sensually and beseeches her to end it for both of them by aiming a bullet through both their heads.

Even with that doubt in our breasts over Bond’s honor and manliness, SKYFALL is still a powerful movie. The climax goes down at Bond’s ancestral home in Scotland called Skyfall, a rambling castle on the moors that screams The Dark Is Rising; where character will be tested, where spirits will be punished, where icons will be replaced, where the sky will fall.

And after the fall, the stampede…