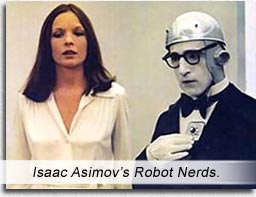 Woody Allen pays slapstick homage to Charlie Chaplin in this futuristic satire on totalitarian societies. SLEEPER will be appreciated most by those with their eyes wide open.

Milo (Allen) has been cryogenically frozen since 1973, now unfrozen 200 years in the future by scientists to combat an oppressive government Leader. As with all “future” films of the 1970’s, the future just looks like the 1970s with rounded buildings and cars. And of course, sex has degenerated to standing in an electronic phone booth – and the hero, as always, must prove to the future chick that it’s more fun the “old-fashioned” way.

Milo’s mission (against his better judgment – “I never volunteer for anything that could involve torture. I’m a screamer”): to locate the Underground revolutionaries in the Western District, and thwart the Leader’s totalitarian plan called The Aries Project, by doing something Revolutionary and Underground-y (although no one knows what that really entails).

Milo teams with luminous Luna (Diane Keaton), who is kidnapped Patty Hearst-style and brainwashed by the Underground – just before the real thing actually happened in real life – and, accompanied by loud and frisky ragtime jazz, they argue and shtick their way infiltrating Aries and kidnapping the Leader, who is nothing but a nose waiting to be cloned.

As with all government plots, it turns out to be a disorganized and dangerously ignorant mess, which could easily be overthrown by barely intelligent revolutionaries if they happen to get past the door guards.

Woody doesn’t totally go broad; there are still quips aplenty, delivered in that offhanded nebbish whine that must have really annoyed Hitler.

SLEEPER is snappy, unpretentious social commentary liberally sprinkled with battling pudding with brooms, slipping on giant banana peels, falling off ladders and pretending to be a robot butler.