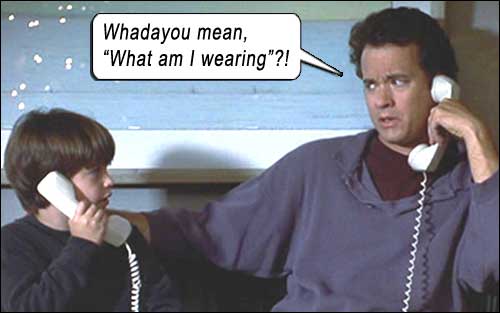 SLEEPLESS will put you to sleep.

Sleepless in Seattle? Must be from all that grunge music you kids are listening to.

The macro, self-aware message in SLEEPLESS IN SEATTLE is in the scene where characters measure the emotional impact of 1957’s AN AFFAIR TO REMEMBER against the parachuting scene in THE DIRTY DOZEN where Trini Lopez breaks his neck. It’s far and away the absolute funniest scene in the movie (ad-libbed by Tom Hanks), but writer-director Nora Ephron is also confessing something: “Men, I know you don’t understand why we women weep over AFFAIR, that we’ve got vastly different tastes, so in giving you that acknowledgement, I’m asking in return that you give me a little pass as well for my movie crafted in that movie’s shadow…”

Uh, now can we have an apology for insulting our intelligence with Meg Ryan’s character and performance, Nora?

Hanks is widower Sam Baldwin, lonely guy in Seattle with son Jonah (Ross Malinger). One night, Jonah calls a radio show and moans about his dad’s loneliness. Sam is forced onto the phone, the DJ dubbing him “Sleepless In Seattle,” whereupon he oozes that Hanks-ian charm, enough to wet the knicks of listener Annie (Meg Ryan) in her car over the other side of the country in Baltimore. (Stop right there: this is not a national newscast. It’s a call-in talk show for weepy chicks – and it’s being broadcast across the country in real time? Okay, apology accepted, Nora. We’ll move on.) 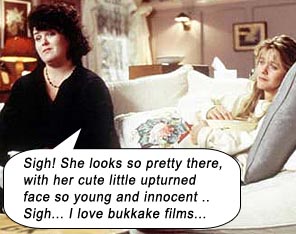 Due to being conditioned by First World society to believe it’s her duty to marry and spawn, Annie is trapped in a loveless engagement with Walter (Bill Pullman, playing the definition of the word “nice”; read as beige, vanilla, Breckin Meyer, etc.), yet starts fantasizing about the Seattle lonely guy. She is enamored with the concept of true love across the wires – and that’s what she tells her fat friend (Rosie O’Donnell) – but let’s face it, she’s an unbalanced stalker.

Accompanied by snappy, poppy, peppy music that will make you puke in your mouth, the two protagonists run through a series of misadventures where they don’t quite meet. In a desperate attempt at matchmaking, son Jonah arranges to meet Annie atop the Empire State Building, as the romantic couple promised in AN AFFAIR TO REMEMBER. (Matter of fact, every second scene is a reminder that this movie is begging, borrowing and stealing from that earlier, even dumber movie.) Tension mounts, as Sam comes after Jonah, Jonah leaves his teddy on deck, Annie is rushing from her date with Walter, elevator with Sam goes down, elevator with Annie goes up… oh lordy! Will they ever meet and let us jizz in our pants?

At this point, are any men left watching at all, except those balled-and-chained pussies holding their wives’ purses?

Rita Wilson, Hanks’s real life wife, is here (she weeps over AFFAIR), 100 times more radiant, more intelligent, more loving, more wondrous and more sane than Meg Ryan, yet Ryan gets the lead because her front lip curls just that much higher than Wilson’s. As she did in her first role opposite Hanks (in JOE VERSUS THE VOLCANO), Ryan tries overly hard to be cute and coy and comes off as abnormal.

Think about it: this woman is “having fantasies about a man on a radio show,” taking her romantic cues from Cary Grant movies, obsessive about getting married and falling in love in the manner prescribed by movies… even if she gets together with Sam, what will she do at the first sign of reality impinging upon their Hollywood existence, like when he takes the garbage out in his tighty-whiteys with the skid marks? Does she tune back in to Pathetic Friendless Radio and seek out another “hopeless romantic” to pursue like a she-mantis?

Okay men, you can come back in the room now. Nora Ephron says she’s sorry.