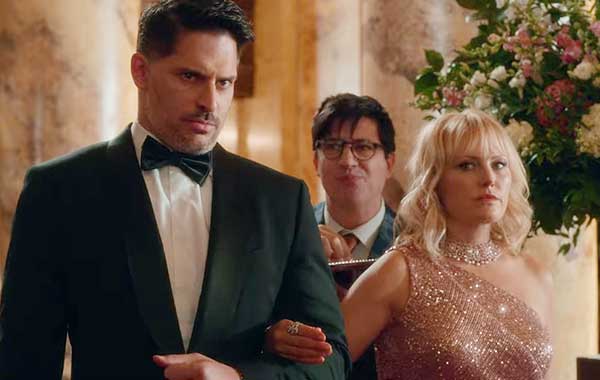 When it comes to chests, make mine a Manganiello.

The Sleep Through It.

THE SLEEPOVER is made from the scrapings at the bottom of the cliché dumpster, as two kids discover their boring suburban mum is an ex-super-thief blackmailed into one last job, and must use their plucky ingenuity to rescue her from her criminal organization. Because a teen girl and pre-teen boy totally have enough worldly knowledge AND espionage experience to outmaneuver adult career criminals.

Malin Akerman is Margot, mother to 15-year-old Clancy (Sadie Stanley), and 12-year-old firecracker Kevin (Maxwell Simkins). Ken Marino is father Ron, a dork masterclass. As a teacher at her kids’ school, Margot is captured on a viral video, and seen by thieves from her past life, who kidnap her for her expertise in heisting a royal crown; with dork father tagging along, who never knew Margot was in the witness protection program. All this happens on the same night Clancy and Kevin have two friends over for a sleepover, which accounts for the tenuous movie title. Cree Cicchino is Clancy’s smug friend Mim, a bad influence when it comes to boys and skinny jeans, and Lucas Jaye is Kevin’s bedwetting friend Lewis, allergic to everything, which the filmmakers think is super funny for some reason.

The kidnappers (Harry Aspinwall and Enuka Okuma) reunite Margot with rugged Leo (big Joe Manganiello), her partner in crime, and ex-fiancé, which sets up all manner of unfunny jealousy jokes from dork husband, especially that old fallback of the doughy guy constantly telling the beefcake to put a shirt over his muscles – a joke stolen from every Mark Wahlberg movie.

The kids follow a trail left by Margot, “This is our chance to be heroes in the real world, not some imaginary world.” Now, I understand kid’s adventure stories need to exist in a dullard reality so that the hero kids can be equal to adults. Fine. But don’t make things appear out of nowhere like a Bugs Bunny cartoon. They enter a tunnel – suddenly a flashlight. They want to cuff someone to a pipe – suddenly handcuffs. They need dry clothes – suddenly a clothes store is there, conveniently left open in the middle of the night with no alarms on.

The disjointed clues come at us faster than you can stand there and look at something that leads to something else for the barest of reasons. They break into Margot’s storage garage and spy gear emerges from the walls, including a car – which drives itself, to avoid the thorny problem of kids driving without licenses; they break into a locked library at night – have alarms been invented in 2020 yet? – Mim complaining, “I don’t know who Dewey is but his system sucks!” Really? You just found what you needed FASTER than doing a Google search. The kids are led to one of Margot’s accomplices, Jay, who outlines a plan to rescue Margot, but then Clancy handcuffs Jay to a pipe, pleading, “Please don’t find me and kill me, I just need to get my mom back.” Yeh, that’s WHAT THE KIND OLD 40-YEAR-OLD LADY WAS JUST ABOUT TO DO WITH HER EXPERTISE, DUMMY!

As dork husband dorks all over the heist, and Margot and Leo fight indiscriminate guards/royals/henchmen—who knows?- Clancy just reaches out and plucks the crown from the royal’s head as they WALK PAST THE FIGHT SCENE. Since this kids’ movie can’t advocate stealing, the crown is returned almost immediately – yet they stole a car to chase down the villain, endangering lives and destroying property. Got the message kids? Only good guys can do crime. To add carrots to our vomit, everyone arcs to resolution, all at once in a two-minute saccharine wrap-up.

Written by Sarah Rothschild like she’s read too many Nancy Drew mysteries and directed by Trish Sie like she didn’t pay attention in Bond Action Movie class, THE SLEEPOVER is produced by “LD Entertainment” but it rigorously follows the rules of homogeneity laid down by Disney, where all the kids are smarter than the adults, and all the females are smarter than the males; where hot chicks are married to dorks and all the kids speak as if their lines were written by adults. (That used to be cute, until we realized Hollywood kids are just gregarious weirdoes raised as a cry for help by underachieving parents.) With Hollywood whining there are not enough female filmmakers, honestly ladies, do you really think you’ll be taken seriously enough to be hired for tentpoles or Oscar noms if you keep producing this feeble-minded porridge?

THE SLEEPOVER will only be appreciated by those young enough to get excited over one.