Hip to be Slumdog.

I’m gonna get skewered for this – but only if you are not aware of the land of my forecumbers. Just as black people are the only ones allowed to call each other N-Words, my cucumber patch being originally from Madras earns me the right to satire paka Indian-English and get away with it. He’s not a racist. He’s a very naughty boy!…
— Poffy the Cucumber.

Eight Oscars, yaar! Vart madness is this? Still even, seven of them very deserving, child. But Best Picture? Acha! 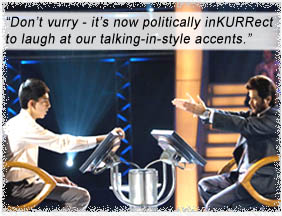 Mumbai 2006: Young Jamal (Dev Patel, Brit Indian, never been to Inja, but paka head-shake excellent acting) has just topped the 10 million rupees question in Indian Who Wants To Be A Millionaire? Prem game show host (Anil Kapoor, Elvis hair and talking-in-style) kennot believe slumdog Jamal is winning without cheating, so orders truth beaten out of him. Ah, that’s it! Torture proven by George W. Bush of Amrika to be tops effective technique for getting truth.

But instead, top police inspector (Irrfan Khan, Indian Gary Sinise), finds out Jamal’s storied life living on the dog-eat-dog streets has led to street smarts that happen to be Millionaire questions.

Kids grow to be young teens Tanay Chheda (Jamal) and Ashutosh Lobo Gajiwala (Salim, now looking like my cousin Jeffrey), and live by their wits, conning their way as guides at the Taj Mahal – ayah!

Their last incarnation is twenty-something, Dev Patel (the Indian Robert De Niro) and Madhur Mittal (the Indian Joe Pesci). Latika grown is the very mixed-white Freida Pinto, having learned well the ways of the prostitute from the orphanage, now, like every time-serving chinaal, only goes with the rowdiest and richest of India.

Yet Jamal tries to no avail to make her leave life of luxury and enablement – says his love is eternal and unswerving and destiny – but uba! no rupees! how vill I afford my finest-silk saris, men?

After a night of torture and flashbacks – they take him back on the show for final question! Vart’s this, men?! Is that legal? Is that right? Vouldn’t he sue the television station right out from under these chutiyas?

When Elvis-hair shouts “Who vants to be a Millen-air?” Latika and all India are watching, as Jamal wins 20 million rupees (about $4.57 U.S.) and only then does the Bride-Running-Through-Streets. Now money being no object, love is strong, isn’t it.

Why people call this a “romance”? Shouldn’t “romance” work both vays? Is Latika retarded or just too lazy with enablement to leave her life with already-millenair businessman-who-mistreats and run off with chawalla Jamal? Dash it! – she is a grown wimmin, she has mind of her own. Couldn’t she put more effort into leaving her enslaved life? But how “enslaved” is it? Mansions, cars, servants, and once-in-a-vile chudan chudai with her bossman hubbie. Oh, such big deal deluxe effort! Of course 20 million rupees is talking her tongue, so no problem leaving life of enablement now – for new life of enablement, with pucchi-whipped Jamal.

An India never before seen on Western film, co-directed by Loveleen Tandan, from novel Q and A by Vikas Swarup (book plot was about “luck” – movie writer Simon Beaufoy baba put in silly “destiny” angle); soundtrack most definitely Indian but hip rock, not sitar twang and dhoti dancing; big movie, vast in scope, exhilarating in the telling; creative subtitles; feel-good foreign flim with “up” ending; big Bollywood dance number conclusion; everything works out in the magical land called India. Hip to be slumdog now.

Why then, ruin with plot of torture going nowhere and enablement of a whore disguised as love story? Good picture? Yaar. Best Picture? Cha!