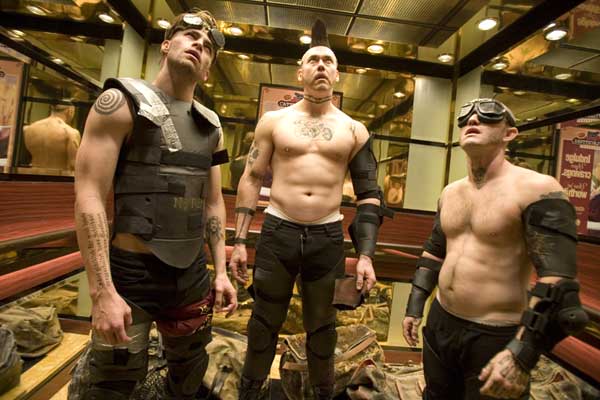 Just another Tuesday in Vegas…

The logic precept Occam’s Razor tells us that “Plurality should not be posited without necessity.” In other words, “Simpler is better.” But SMOKIN’ ACES fell asleep during physics class and won’t go near any logic precepts.

A walloping actioner with way too much exposition, there is more unnecessary dialogue here than in the Pam and Tommy sex tape.

Plot is straightforward: a mobbed-up magician, Buddy ‘Aces’ Israel (Jeremy Piven, ENTOURAGE) is about to canary to the FBI. Holed up in a Lake Tahoe hotel penthouse, the mob wants him dead – thank you, Captain Obvious! – and puts out not just a contract, but a bounty on his head for one million dollars. Out to scalp him is every vicious criminal and gunslinger in the west – rustlers, cutthroats, murderers, desperadoes… mugs, pugs, thugs, nitwits, halfwits, dimwits, vipers, snipers, con men, Indian agents, Mexican bandits, muggers, buggerers, bushwhackers, hornswaggelers, horse thieves, bulldykes, train robbers, bank robbers, ass-kickers, shitkickers and Methodists. 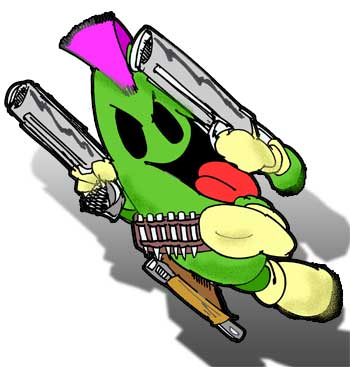 And writer-director Joe Carnahan (bastard spawn of Guy Ritchie) is intent on giving us backstory on each and every one. With jump cuts slamming enough to knock over an elephant, we are introduced to crooked cops led by Ben Affleck, goth-insane Tremor Brothers (Chris Pine, Kevin Durand, Maury Sterling), a steel-speared Persian-looking guy (Nestor Carbonell), a Welsh master of disguise, various other pain-meisters and do-badders – there’s even an Ambiguously Lesbian Duo (Taraji P. Henson and Alicia Keys)! And all the while we’re wondering: if these muthas are so publicly badass, how is it that they haven’t been arrested/killed/given a reality series yet?

For pure visceral entertainment, this is the movie for you – problem is, it loses focus: is it aiming for a gut-level slam to the reptilian brain, or trying to unspool a complex story with a half-relevant twist at the end? I’m here for the visceral; please stop with the dialogue – too much talking! Stop the talking! Will you go to lunch?! Go to lunch! WILL you go to lunch?!

A discernible thread follows the two cops, Carruthers and Messner (Ray Liotta and Ryan Reynolds), trying to stop the hit, with Andy Garcia (supersuave as always) their superior officer with ulterior agenda.

Jason Bateman scene-steals as an alcoholic, cross-dressing sleazebag lawyer (nothing new, I know), Tommy Flanagan is chilling as the LEON/Hannibal master of disguise, and Ben Affleck does some of his best acting while he lies dead and his killer works his mouth like a puppet (the same method that was used in GIGLI). 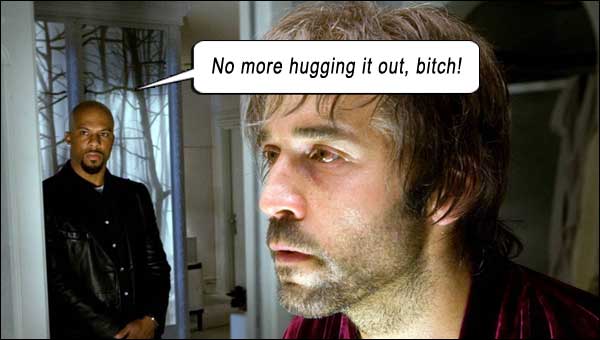 The most disturbing murder is the intimate one, when Persian spears a Security Guard and almost sensuously embraces him ’til death.

Aussie Joel Edgerton does such a fantastic job of assimilating first his Russian character and then Tommy Flanagan’s assassin character (who wears his rubber face – in reality, it is Joel playing the assassin) that we actually believe he is first a klutz Russian and then a nerveless assassin.

There are some well-directed, tense moments, the usual shoot-em-up melees, an emphatic, tear-streaming performance from Jeremy Piven, with a half-lame twist at the end that prompts – you guessed it – more talking, as Ryan Reynolds actually says to Andy Garcia, the mastermind behind the quasi-scam, “Make it all make sense.”

Really, if we wanted this much unnecessary talking, we’d pop in Pam and Tommy’s sex tape.