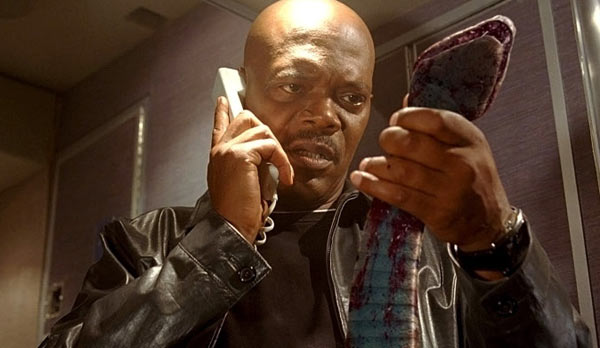 Sam Jackson calls a phone-sex operator and chokes his snake.

A young motocross rider witnesses a mob murder in Hawaii and is scooped up by the FBI to testify in Los Angeles. On the plane journey to the mainland, the mobster releases hundreds of SNAKES ON A PLANE to wipe out the witness. If this method seems a little hit-or-miss, expensive, inefficient and downright stupid, you’re absolutely right.

SNAKES ON A PLANE is as much a waste of time as you imagine it to be. It gained internet notoriety during its production and therefore has an aura of unwarranted fame/quality surrounding it. (It was the SHARKNADO of its day!) Thankfully, it was recognized as the piece of shit it is upon its release, and lost money. From its opening scenes that reek of TV movie production levels, to its execrable acting and idiotic storyline, to its CGI snakes and attempted humor, it is one hot reptilian mess.

Australian Nathan Phillips is witness Sean, on the run from mob boss Eddie Kim (Byron Lawson, whose acting is as stiff as his six-pack), and saved by FBI agent Flynn (Samuel L. Jackson, who inexplicably agreed to do this movie not despite its title, but because of it!).

The stupidest part of this stupid movie is the framing of the opening murder scene and how Sean witnesses it. After Eddie Kim, surrounded by his henchmen, beats a lawyer to death with a baseball bat, they hear a scuffle in the bushes and see: the tail-end of a bike disappearing out of frame. On this millisecond sighting of Sean (wearing a helmet and full gear, and not seeing his license plate, and not able to distinguish the bike model as 95% of it is out of frame by the time they see it), they track Sean to his apartment (which, by the way, looks like a hotel) and try to whack him.

But Flynn is there first, to save Sean and shoot the henchmen who can’t aim. But consider: If the above non-sighting applies to Kim and his henchies, then the same applies to the FBI. How did the FBI ever track down Sean? Okay, so one of the FBI guys shows Sean a Red Bull can in a baggie – the same one he was drinking at the murder site (this assumes they discovered the lawyer’s body – how? when?) – and also assumes they are frickin’ magicians for lifting Sean’s fingerprints from the condensed liquid on the can’s surface! This also assumes they’ve got his fingerprints on file to verify his address; also discovering that Eddie Kim has put a hit out on him, thus sending a macho agent to scoop him up rather than a routine donut gobbler. If this Hawaiian FBI branch is this good, why couldn’t they track down that lawyer before Eddie Kim beat him to death? And why can’t they find Obama’s birth certificate?!

So Eddie discovers which plane Flynn and Sean are taking back to Los Angeles and plants hundreds of dormant snakes in the cargo hold, with a time-release chemical that would drive them wild enough to escape the hold and bite everyone to death after the plane takes off. Remember, human beings with brains are writing this shit.

The filmmakers are too cute by half by actually introducing a crapload of characters that we’re meant to care about. Which we don’t. Julianna Margulies is the head stewardess, Kenan Thompson is bodyguard to a rapper (Flex Alexander), David Koechner is the pilot; watch for Taylor Kitsch as a mile-high banger with his big-titted bitch in the bathroom (that one we care about).

Once the CGI snakes are loose and start attacking all the passengers, and are dispatched in various ways by Flynn and the desperate victims, you can safely fall asleep and won’t miss anything interesting.

SNAKES ON A PLANE is R-rated, simply so Jackson can do his Jules Winfield and say, “I have had it with these motherfucking snakes on this motherfucking plane!” Hey, that’s how we ALL feel, you mushroom-cloud-layin’ motherfucker…