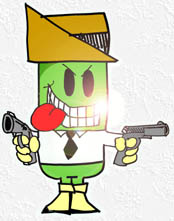 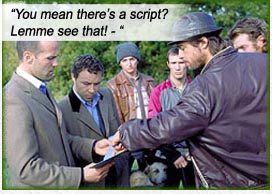 Released on the heels of his stylish, dangerous LOCK, STOCK AND TWO SMOKING BARRELS, SNATCH simultaneously solidified the grit-edged, flamethrower directorial style of Guy Ritchie, even as it launched Jason Statham into his TRANSPORTER leading man roles; heralded an altogether explosive performance from Alan Ford as Brick Top; proved yet again the go-to value of Rade Sherbedgia as generic Slovakian Hard Guy (even though no two publications can agree on the spelling of his name); saw Dennis Farina reprising his smarm-jockey from GET SHORTY; was a hilarious continuation of Vinnie Jones’s unbalanced contract killer from LOCK, STOCK, and marked Bradley Pitt’s first foray into incoherent mumbling whilst covered in poo.With a soundtrack as impertinent as its plot and as foreboding as the felons who populate it, edited with a verve which could snap your cervical vertebrae, and shot with a style that will make your eyebrows bleed, SNATCH is a Molotov cocktail of a movie; a careening, chain-wielding maniac of a film.

Indescribable at best, inexplicable at worst, who knows exactly what is going on in SNATCH, except maybe Guy Ritchie – and only when he’s drunk.

Compulsive gambler, Frankie Four Fingers (Benicio Del Toro) must deliver from London to New York an 86-carat diamond to Cousin Avi (Farina), but Boris the Blade (Sherbedgia) gets in the way, via his small-time help, Vincent and Sol, simultaneously igniting the wrath of sadistic underworld kingpin, Brick Top (who would just as readily suffocate you with a plastic bag or feed you to a pig as deign to scathe your manhood with his cockney insults). So Cousin Avi must jump-cut travel to England and employ Bullet Tooth Tony (Jones) to retrieve the gem.

Disparate plots and subplots intertwine like choker vines – with comedy so sharp you could paper-cut your tongue on it, in dialogue so lushly British you could smell the fish ‘n’ chips frying in three-day-old oil.

In a seemingly removed throughline, Turkish (Statham) and his marginally-tolerated sidekick, Tommy (Stephen Graham) get themselves deep into devil dealings over bare-knuckle boxing matches with Brick Top and must tactfully employ the very fighter who put their star fighter out of commission – the “harder than a coffin nail” gypsy, Mickey (Pitt). Refusing to play the game of taking dives, Mickey gets Turkish and Tommy into deeper devilry when his freight-train right hook fells Brick Top’s bet-winning boxer.

In the final few minutes, the disparate threads coalesce and the diamonds and dogs and boxers and blaggings all somehow crazily make sense.

But only when you’re drunk.