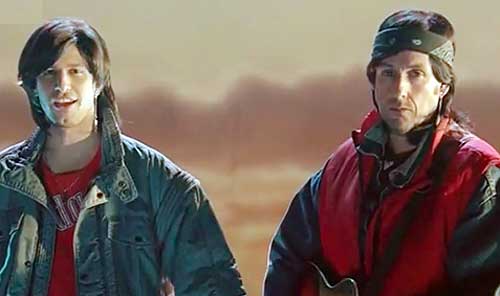 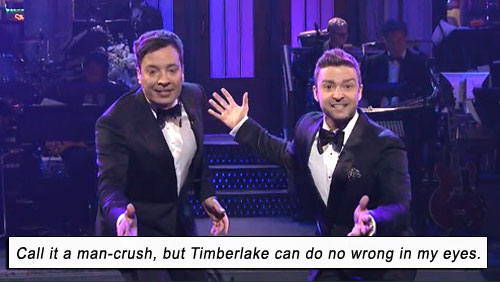 The American comedy institution SATURDAY NIGHT LIVE continues its tradition of not being funny, by throwing a 40th Anniversary Special and not being funny.

SNL 40 is not only Not Funny, it’s embarrassing, pathetic and painful. Why do these people put themselves through this? Why do they put US through this? Why do audiences keep watching? Excepting a few quality seasons during its formative years, and a handful of good gags and entertaining personalities through its history, SNL has never been a prime cut; longevity seems to be counting more towards SATURDAY NIGHT LIVE’s comedy legacy than actual quality.

SNL 40, broadcast by NBC on Sunday February 15, 2015, touted as “Comedy’s Biggest Stars Come Home,” boasts a studio audience that consists of everybody who is anybody (from Spielberg down), brings together past alumni, past hosts, shows montages of classic sketches and bits, only has time for a few musical numbers, showcases veteran cast re-doing classic bits, and retains an overall sense of undeserved mutual cock-stroking.

I’m not going to outline a laundry list of bits; in this overlong show, the bits themselves are irrelevant. It’s the overarching impact of this drudgerous wankfest; the cognitive dissonance of continually hearing how “good” it is and yet witnessing exactly the opposite. Bits which are poorly written and badly rehearsed, amateur timing from supposed professionals, forced laughter, titters where there should be guffaws, and sometimes, those uncomfortable silences into which your career spirals never to be resurrected again… We view this whole shenanigan with hands over our faces, peeking through the gaps in our fingers. 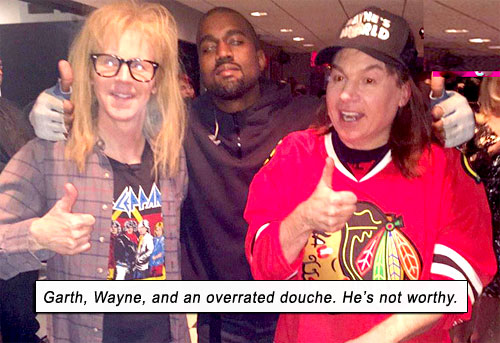 It reminds me of the recent Monty Python reunion shows at the O2 arena (Jun 2014: Monty Python Live (Almost)); though that tour was a nostalgic success, even an artistic and commercial success, it was a complete failure in its attempt to recapture the timing and verve and urgency of youth. Which is what reunion shows like that – and this SNL one – are all about. Recapturing our youth. (And of course, selling advertising and merch to us in the process.) To the young or uninitiated, these shows will be a success or failure purely depending on NOW. To we who lived our youth through those original times, these shows succeed or fail on how well they recapture it. And let’s face it, they can’t recapture it. They will always only remain “failed attempts.” But it’s not just that metaphysical youth aspect – it’s the fact that when an old person tries to do something they did when they were young, it just doesn’t look right or read as well as it did when in their prime. It’s a terrible, sad fact of life.

Dan Aykroyd cannot possibly recapture the original “flavor” of his Bass-O-Matic sketch from the 70s. But he tries valiantly. And fails. In one of SNL 40’s first sketches, Aykroyd appears with that cheese-eating grin. He looks old. Really old. And fat. Camera pulls back and we see he is holding up a dead fish, a bass…

Not even crickets. It’s just an old fat guy holding a fish. Now one would think that after all the lengths they’ve just gone to, of bashing us with the message that SNL is some kind of mythical laugh factory, that seeing the opening to the “classic” Bass-O-Matic sketch would elicit a cheer of recognition from the audience.

Silence. Because the studio audience (not the old stars, but the civilians) are too young to recognize this 35-year-old sketch! It was never one of the best sketches, but at least the performance in its heyday had a young, vital guy delivering his lines fitfully in a Pythonesque lightning strike. Now it’s just an old fat guy holding a fish. (At least with the 2014 Python shows, when Cleese came on with his dead parrot, stating, “I would like to register a complaint!” the audience’s rousing roar of recognition drowned out the pathos. Here, it was just pathos. This was devil’s territory from the get-go.) There was no way Aykroyd could attain the verve and urgency and timing of his youth. His speech was too slow for comfort, he missed putting one of the fish into the blender, he turned on the blender and it froze… His fake smile went on for miles, but the flop sweat on his soul was glistening hot…

You ask, “Why don’t they just pack it up?” Because this is what they do! What else CAN they do? This is how they made their bones. But recapturing the magic is definitely out of the question after a certain time…

Chris Rock gives a prolonged tribute to Eddie Murphy, who has gone the way of the dodo. The last quality thing he did was …um… uh… Then Eddie himself steps out to raucous applause and proceeds to do two minutes of SNL tradition (i.e. see paragraph 1). 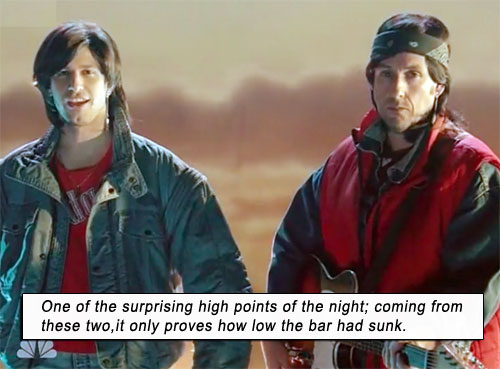 The opening dance number with the somehow-talented Jimmy Fallon and ever-talented Justin Timberlake is spiffy. No complaints there; it retains that just-above-mediocre level that SNL sometimes attains on its absolute best nights.

Then the monologue with old hand Steve Martin (long since Not Funny himself, but somehow squeezing some last driplets of humor from his dead soul). During the monologue, Martin is beset on all sides by superstars who want to host, including Tom Hanks, Alec Baldwin, Chris Rock, Peyton Manning, Billy Crystal, Paul McCartney and Paul Simon… and then producer Lorne Michaels makes one of his many missteps, in his quest to attract a younger, more current audience (it’s a well-known fact that Michaels has final say on all decisions, good and bad, and all the artists cringe and bow to his every whim, as per WAYNE’S WORLD): Into this lion’s den of icons, Lorne decides to trot out… Miley Cyrus. Wait– Miley Cyrus?! Yes, that class-less hooker whore cunt Miley Cyrus shares the stage with the above legends who have done something useful with their lives. (No, tell us what you really think of Miley Cyrus, Poffy?) God knows how long she had to burnish Lorne’s perineum with that ball-licking trollop tongue to score this spot over other performers closer to the human race.

McCartney tanked. Introduced by Gollum– I mean, Keith Richards, the Beatle’s minstrel, the songster, the legend – bombed horribly. In the first seconds of Maybe I’m Amazed we could hear his voice is non-existent. And it went downhill. Now I’ve even closed the gaps in my fingers. I don’t want to watch. I don’t want to hear, I don’t want to live. At the time of writing, you cannot even find this performance on YouTube – you have to go deep into the TV station’s archives to find it – which means everyone involved (from management to McCartney himself) unanimously agree that it was so bad, it needed the hiring of pro hackers to restrict this video from being posted on YouTube at all costs. They will fail, of course, because YouTube is a behemoth that will eat all of us alive and screaming in the end.

People clapped. You have to clap, right? But now you’re not clapping because you were blown away by the performance or inspired or even mildly impressed (unlike that artistic inspirational perfection of George Harrison and Paul Simon doing Here Comes The Sun and Homeward Bound on SNL in 1976); you’re clapping in pity, that a 75 year old man can kinda sing a Paul McCartney song with a band and everything. Isn’t that special? He gets so excited when they let him out of the home and the boys let him play with them, it’s good for him, great-granddad needs to make some new friends…

The saddest thing is that of McCartney’s tens of thousands of times performing this song, when it hit the atmosphere crackling like a million suns, this SNL 40 abomination (when it surfaces in mainstream social media) is going to be the most codified, the most batted about the internet like cats and tits, commented on and analyzed and critiqued by this generation of twitter twats. Weep for the death of legends. Weep for the death of youth. Weep for Gollum who lost his Precious.

Some apologists might mitigate, Well, a couple of things were good (Billy Crystal asking, “You are Steve Martin, right?; a reasonably enjoyable “digital short” from Sandler and Sandberg, Will Ferrell’s Jeopardy, etc.). Of course a couple of things were good – these are professional comedians, and a stopped clock is right twice a day. But only a couple of things, in a show that is supposedly THE comedy lodestar of the United States? If you were making automobiles or heart monitors, this kind of percentage would be entirely unacceptable.

If SNL 40 had kept it to nanosecond montages of old bits, it could have salvaged a shred of dignity. Instead, each personality dragging their feet onto that supposedly hallowed stage just prolonged an agony that wasn’t going to go away with the constant sucking of Lorne Michaels’ dick.

Here’s to the next 40 years of not being funny.