Like all women, the insecure queen has self esteem issues, constantly chittering about being the “fairest one of all.” And she is also a shapeshifter. Excuse me for nitpicking, but if you can shapeshift, why not transmute into a more beautiful woman? But then she still has to contend with the fickleness of her “Magic Mirror” who obviously likes ’em barely legal, as he pronounces the queen’s stepdaughter, Snow White, the fairest. 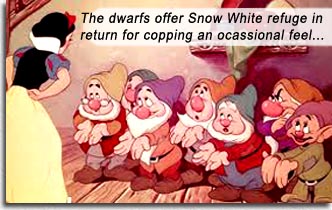 SNOW WHITE AND THE SEVEN DWARFS was Disney’s first full-length animated feature film, and the first cartoon of its kind in the United States. Released in 1937, the story was lifted from a Brothers Grimm fairy tale (Schneewittchen und die sieben Zwerge), the Grimms having composited the story from European folk tales. The original tale is a morbid outing which reads almost like a biblical story of magic and murder; of a queen who demands the death of her stepdaughter, telling the murderer to bring back her stepdaughter’s lungs and liver so that she may eat them… Some of the story elements may be allegory or probably describing Druid rites or selective breeding; some early sources cite the “Magic Mirror” of the story as being the sun or moon. If you ask Eric von Däniken, he’ll tell you it’s about ancient astronauts.

The cartoon itself is a magnificent technical achievement, setting the bar for the industry the world over. And it is still a marvel to view. From the characters’ expressions to their action lines – a stunning, hand-crafted achievement (something which the cheap, avaricious Hanna-Barbara studios completely forgot when they started churning out Saturday morning cartoons on the cheap for audiences who couldn’t care less). There are scores of animals in certain scenes – every single character hand-drawn and colored – no mechanical duplication here; modern cartoons use various technologically expeditious methods to achieve these same results, none with as much verve and flourish as Disney’s real drawings.

When I was young I remember thinking that Disney cartoonists traced over pictures of real people to make their cartoons so lifelike. As goony and hilarious as the Warner Brothers cartoons were (Bugs and Daffy and Porky – with their own inimitable action lines) Disney’s human characters seemed aglow with a mystical life energy that was frankly disturbing, almost like watching ape behavior – it gives you the chills when it gets too “human.” As an aspiring cartoonist, Disney cartoons scared me, they were so good.

But due to the Grimms mashing this story together from so many sources, and then Disney further taking the Grimm tale and dumbing it down, the story itself is as illogical and mismanaged as any given fairy tale…

Disney cartoons were so excellent animation-wise that we believed they intrinsically carried a moral message. As far as I can grasp, SNOW WHITE has no message. It was created for the exact same purpose as Bugs hitting Elmer over the head with a rock – to mindlessly entertain.Emphasis on ‘mindlessly.’ For example, jailbait Snow sings to her woodland creature friends of her desire for a prince to come and take her away (we presume from all the misery of living in a palace with three squares a day). Lo and behold: a prince hears her warbling and turns up, ready to do some damage with that royal pecker of his. At which point, Snow runs and hides from him – like every chick who doesn’t know WHAT she wants. Typical. Yet Prince Pedophile is having none of her coyness and tries to seduce her out with song, believing a little Mario Lanza will loosen that severe bodice.

The jealous queen (voice of Lucille La Verne) orders a huntsman to take Snow White (voice of Adriana Caselotti) into the forest and fix her little red wagon. But the huntsman takes pity on Snow (probably harboring his own misshapen desires on her taut boy’s backside) and releases her into the forest, killing a wild boar to take its heart back to the queen as proof of her death. (Not as gruesome as the original tale, though still pretty grisly – but not an obstacle to little kids weaned on the indecencies of the King James Bible.)

Snow finds a tiny house in the woods inhabited by seven dwarfs (who work down a diamond mine), with whom she takes refuge. Innocently. Yet with every male in the audience wondering exactly how these seven grizzled miners don’t pile on this smooth-bodied wench the first chance they get. (Don’t even TRY to deny the thought crossed your mind if you’re a male over 20.)

Of the various dwarf names in all this tale’s antecedents (such as the pertinent-yet-inappropriate Wanky, Spanky and Polygamy), Disney was responsible for solidifying and popularizing the names of the Seven, “fixing” them with personalities to match: Doc, Sleepy, Grumpy, Sneezy, Happy, Bashful and Dopey (who exhibits all the characteristics of a child, or a retarded adult – but for the sake of this cartoon, we’ll call him Dopey and let the chips fall where they may). He may be called Dopey, but he’s the only one who keeps trying to kiss Snow White full on the lips. Always Be Closing, my son. She in turn keeps shoving him into the Friend Zone by kissing the top of his head, infantilizing all these grown men with her condescending female haughtiness. No wonder the queen wants her dead.

Meanwhile, snitchy Magic Mirror – who apparently holds a medical degree in biology – tells the queen of the surrogate pig’s heart. The queen resolves to kill Snow personally with a poisoned apple, transforming into an ugly hag to go undercover.

If you let the plot points slide, SNOW WHITE AND THE SEVEN DWARFS is an excellent animation adventure, but the more you think about the plot, the more it seems like a tale woven from actual events (and ancient astronauts, of course) that was twisted into fireside myth by folklorists who had no idea where magic ended and physics began, conflating events to keep their listeners interested. (In some versions, the queen tries three methods to kill Snow; in some versions, she sends an emissary of death; in some versions, she disguises herself, etc.) The version we have ended up with – the Grimm tale that this Disney cartoon is wrought from – is, I believe, a perversion of a much more intriguing tale that might have resembled a Greek tragedy had Ovid or Homer tabulated it.

While the dwarfs are at the mine wondering how to seduce Snow into an eight-way, the queen-as-hag arrives to slip Snow the poisoned apple. All Snow’s frolicking woodland animals become fearful and take shelter – after all, ugly people are evil, right? Another lesson well-learned by the children of Republicans.

Now these final scenes in the cartoon are infuriatingly ambiguous: Snow apparently dies from taking a bite of the apple and she is laid in a glass coffin by the dwarfs and mooned over for god knows how long. Along comes the Prince on his big-assed steed, and we find he’s not only a pedophile but a necrophile as well, as he lasciviously plants a wet one on the lips of a corpse! And the corpse wakes up! No explanation. Ride off into sunset and title card, “They lived happily ever after.”

The cartoon is so artfully made that its emotive impact hits you in the weeping nerve – but, again, if you think about it, it makes no sense at all! Why put Snow in a glass coffin above ground? The title card says because she was so beautiful. So is it implied that they will inter her when she starts to decay? Or is she in a state of indefinite suspended animation? And when Prince arrives, he sees a young dead girl on a bier and the first thing aroused in him is a desire to kiss her? (So when he plants his woman-lips on hers, who’s to say he wasn’t disappointed when she “came back to life”?) And the girl then leaves with this total stranger – why? Is it because he has a ride? (See how important it is to have a car, guys?) For the length of time she’s known Prince (all of five seconds), she might as well have married Grumpy, who displayed all the necessary characteristics in the Romantic Idiom Flow Chart: at first he hates the girl and how she intrudes on his bromosexual lifestyle, but eventually succumbs to her charms. In a Cary Grant movie that’d spell close-mouthed kisses leading to marriage.

Most versions of this tale tell us the prince’s kiss (or the movement of the coffin) “dislodged the poison apple that was stuck in her throat” but in this cartoon, we don’t even get that meager unsatisfactory explanation. Snow snaps out of her coma for no apparent reason, accompanied by a cherubic choir so angelic you feel like clubbing a baby seal to death. After a coma that long, she’d have permanent brain damage anyway… no wonder she rides off with the necrophiliac.