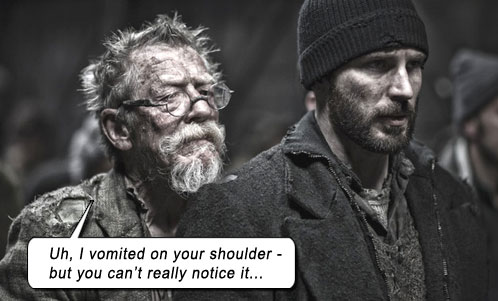 Noah’s Ark and Lang’s Metropolis on a Midnight Express.

SNOWPIERCER will make you question your place in society, the innate class system that drives humankind, and the ultimate meaning of freedom. It will also make you question what the hell Chris Evans is doing actually Acting and not just flexing his bulge-ceps to score all-American hooers.

Evans is Curtis, a “Tail-Sectioner” in a mighty world-girdling train called the Snowpiercer, a long great rolling joke that is a metaphor for human society; a perpetual-motion juggernaut created to house the last of mankind, after a chemical to curb global warming backfired and froze the planet to death. (Typical! Humans!) Like a shark, Snowpiercer constantly needs to move forward to process the perpetual ice for sustenance, and makes one revolution of the globe every year. 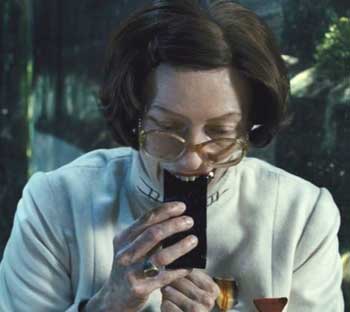 Geeks come running for the delicious taste of Soylent Green!

Tail Sectioners are clothed in rags, eat rubbery protein blocks and are covered in poo, overseen by armed guards. It’s Orwell’s 1984 on steel wheels. The further up the train you go, we are told, the more luxurious the living conditions, therefore the engine itself is regarded/indoctrinated as “the Sacred Engine.” A Yorkshire-accented man-woman named Mason (Tilda Swinton) lectures on the “eternal preordained order prescribed by the Sacred Engine: all things in their place, all passengers in their section,” calling the Tail Sectioners “feet,” adding “when the foot seeks the place of the head, a sacred line is crossed.” Unbeknownst to her, that’s exactly what the Tailers are planning to do…

SNOWPIERCER has been called the “horizontal METROPOLIS” but there’s a slight difference. In Fritz Lang’s METROPOLIS, each segment of society did not know how the other segments operated; the leaders were inept at the workers’ jobs (as proven by Boy Romney trying to perform a worker’s job and failing) and the workers did not know how to rebel effectively (as proven by Metropolis exploding when they rebelled by ceasing to maintain their machines); “Head and hands want to join together but don’t have the heart to do it.” (Reminds us of SNOWPIERCER’s foot and head analogy…) But in the Snowpiercer (based on a French graphic novel Le Transperceneige, by Jacques Lob, Benjamin Legrand, and Jean-Marc Rochette) the leader, known as Wilford, has specifically created the class system from the front to the back of the train, and has been a worker on his own train (as proven by his muscle-memory hand movements), sadly aware that this class system is the only way humanity can co-exist and survive.

He’s right. In METROPOLIS, the separation that the class system caused was the big bowl of wrong; it wasn’t the system itself. In SNOWPIERCER, in the face of extinction, we see that mankind needs the system to survive.

Now don’t get me wrong: this is not the message of SNOWPIERCER – the message is actually the opposite – that mankind should NOT be stultified with a class system and all people should be equal and free. But that point is made in the worst of ways, which we shall discuss later, complete with spoilers…

The woman from THE HELP helps (Octavia Spencer). I find it slightly offensive (but mostly funny) how during the revolt, when the Tailers are shouting, “I’m sick of these protein bars!” the white folk shout, “We want real food!” and she shouts, “We want chicken!” Really? They made the black lady shout chicken? Louisiana fry with cornbread and grits?

Ewen Bremner is a Tailer, whose son is taken for the Engine (as many people are taken mysteriously from time to time), and he suffers a disturbing fate for resisting – his arm frozen solid and broken off!

Luke Pasqualino is a badass Tailer; Vlad Ivanov is an even badder-ass Enforcer.

And John Hurt, direct from his poo-decor totalitarian apartment in Orwell’s 1984, is the tacit leader of the Tail; missing limbs and youth, he keeps prompting the hesitant Curtis to rise to the occasion, “I am but a shadow of my former shadow.” And his name is – get this! – Gilliam. (As in Terry, the Python prince of dystopian futures?)

Kang-ho Song is Nam the Keymaster and Ah-sung Ko is his daughter Yona. They initially help the Tailers in return for the drug “kronole,” but Nam has another agenda, as we constantly see him preparing his daughter in subtle ways for life beyond the engine.

It’s beautifully shot in ocher grays, with gunslinger direction and whipcrack action pieces, with a casual futuristic élan that doesn’t need explanation, yet there are admittedly a few faults and plot holes, because movie is not literal, but a surreal parable. (We see rows of cooked chickens and sides of beef – but where are the cars that house the live cows and chickens?)

Despite the American and European presence, keep in mind this is a South Korean production, helmed by director Joon-ho Bong (or Bong Joon-ho; I guess it depends which hemisphere you’re standing upside down in), who also co-wrote with Kelly Masterson, so there is a disturbing sense of disorientation built into the way the film is shot, the nonchalant gore, the offhanded swearing, plot points that blindside us, sacrifices that shock us (“You know what I hate about myself? I know what people taste like. I know that babies taste best.” What a line!), and the arthouse shots that drive us to delve deeper than the dustups. 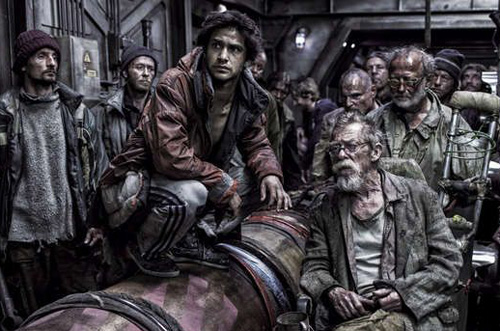 ”The Last Supper” by Ken Shabby.

At first SNOWPIERCER is about the battle of the breakout; as the journey progresses, it becomes allegorical, and as our heroes near the Engine, a startling revelation looms…

A horrifying moment as a gate is opened to reveal a carriage packed with burly warriors, all wielding axes and dressed in black hoods. This must be the Republican car. An American movie would have launched into action that hurts our eyes with cam-shake, but these hooded thugs first soundlessly pass around a big fish that they take turns gutting with their axes… Why are they faceless soldiers? Because they’re truly faceless soldiers doing the Sacred Engine’s bidding. Mason at their head, decreeing, “Exactly 76 percent of you will die.” (This percentage formulation is all part of the grand scheme explained later.) The incongruity when they pass the annual mark and everyone stops battling to wish each other Happy New Year…

We follow through the sauna car, the greenhouse car, the aquarium car, the opium den car, the Duran Duran car (where everyone is a New Romantic in an ecstasy nightclub) – “the train is the world” – the propaganda car aka the school car – and we are slyly fed exposition on the origin of the Snowpiercer and Wilford its creator, in the form of a school lesson video. Where we realize the most disturbing propaganda of all issues from the mouths of babes who are born into it: “I heard all Tail Sectioners were lazy dogs and drink their own shit.”

We find Wilford isolated in the Sacred Engine (with a chunky bimbo as his bottom bitch – nice work for a chick whom we wouldn’t look at twice). And Wilford is Christof! As he did in THE TRUMAN SHOW, Ed Harris runs the place like an absent-minded pajama god. But he’s every bit as conniving as Christof, and irony descends on us like a dog in heat in these climactic payoffs as one horrifying revelation after another…

It is here that Curtis must become a true hero or a part of the machine – and to become hero, he must become machine! – by thrusting his arm into the cogs to sacrifice it…as Gilliam’s arm was sacrificed for another more dire reason decades ago… We will never see Chris Evans more alive than in this role where he immerses himself in revenge, guilt, regret, torment, redemption; all his sins coming together to either crucify or free him. 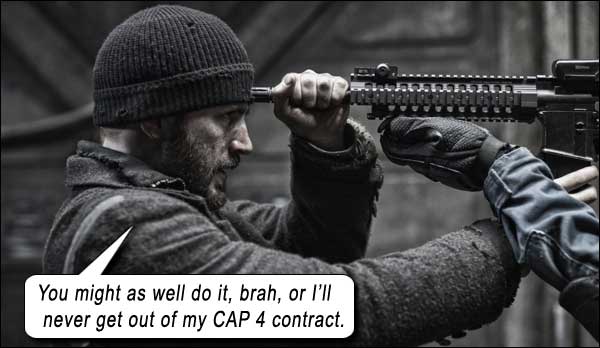 Wilford simultaneously cajoles and grooms Curtis: “You need to maintain a proper balance of anxiety and fear and chaos and horror in order to keep life going. And if we don’t have that, we need to invent it.” (From The Book Of Cheney, Verse 9.) Wilford reminds Curtis that people in their “preordained places” all add up to humanity. Curtis shoots him down with “That’s what people in the best places say of people in the worst places.” Sounds heroic but the truth is, Wilford’s right: humanity is at its optimum efficiency when the majority are herded like sheep.

That’s not the movie’s message though, and a big explosion punctuates what the writers are trying to say… that you need to destroy one closed system to start an open system; that mankind are better than class systems, that the rich need not feed off the poor for humankind to survive; that a true leader of men should not be clinical but compassionate… There are worthy elements to all those messages – but what happens in the movie also sends the opposite message.

ACTION: The people who are trying to escape the system – Curtis’s rebels – blow up the train, causing an avalanche that destroys the whole train, killing everyone onboard. Two survivors – a young woman and boy – climb from the wreckage to see, on a faraway ridge, a polar bear looking back at them. Cut to black.

REACTION: Trying to make a better world and killing everything was exactly what the scientists did with the global warming chemical! Noble sentiments – but inept execution. Destroying the train also destroyed all the resources that the next generation might have used for survival. The message of the movie then seems to be: in trying to make a better world, Mankind will always fuck up because hey, it’s Mankind. Noble sentiment, inept execution.

2ND REACTION: The people onboard the train were indoctrinated that all life was dead on the surface. Seeing the polar bear meant life survived, and is survivable, on the outside.  If it was a squirrel or a caribou, we’d receive the correct message, but when it’s an apex predator… the message that life exists outside the train is surely secondary to the fact it’s a polar bear! And I think it looked straight at us!