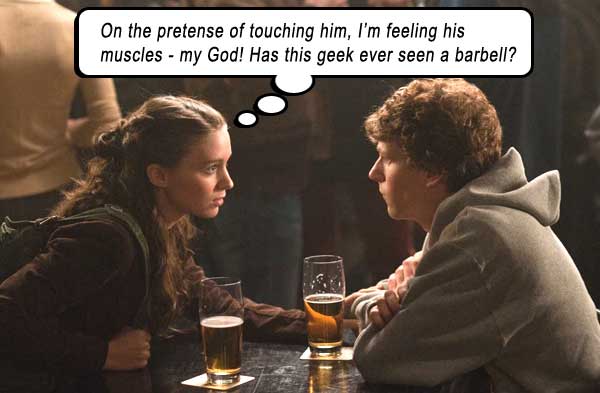 Revenge of the Nerd.

Eisenberg is boy-genius Mark Zuckerberg, creator of the most insidious computer virus since electricity was invented – Facebook.

Don’t believe me? How come every hot chick has ten thousand more “friends” than any given average joe? 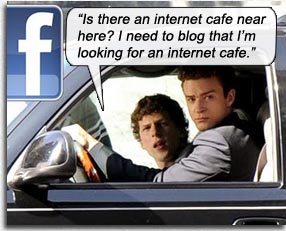 Why else does Facebook have a Relationship Status field dealing solely with whether you’re Single, In A Relationship, Divorced, Married or It’s Complicated?

It seems “facebook” was a generic name for the index of students’ pictures online at every college. If that was the case, Zuckerberg’s genius was to trademark the name. (As canny as Gene Simmons trademarking the ‘$’ sign – as David St. Hubbins sagely advises, “There’s a fine line between stupid and clever.”)

THE SOCIAL NETWORK does for computer programming nerds what STAR WARS did for action figure geeks. Mark Zuckerberg – through Eisenberg’s scathing, forceful characterization – comes off as a cross between Clint Eastwood and Batman.

Written by Ben Mezrich and Aaron Sorkin, with the same intelligent vernacular Sorkin employed in A FEW GOOD MEN (1992); directed by David Fincher with the same verve he directed FIGHT CLUB (1999), THE SOCIAL NETWORK is apparently not an accurate depiction of Zuckerberg or the events surrounding Facebook’s political controversies (according to the subject himself and many associates), but it pulls off a great dramatic punch and, like IMMORTAL BELOVED (the fact-challenged Beethoven biopic), the movie captures the charging spirit of someone who has entrenched himself in the history of the world. The controversy over this social phenomenon only proves the point that any person who attains such hedonistic power will always become more sexy myth than nerdy flesh.

When the legend becomes fact, print the legend.
–from THE MAN WHO SHOT LIBERTY VALANCE, 1962.

The opening scene’s shotgun dialogue dives into Zuckerberg’s character headlong, foreshadowing his ultimate treatment of people – coldly calculating, cynical, brash, contemptuous and condescending. And he’s just talking to his girl. It’s almost as if he was born to communicate via the clinical efficiency of a computer monitor. She angrily tells him, “All your life you’re gonna think girls are rejecting you because you’re a nerd. But let me tell you from the bottom of my heart – it’s because you’re an asshole!” And the problem is…? Isn’t it the nervous daydream of every nerd to actually become an asshole? Wouldn’t we all – assholes and nerds alike – rather be assholes than nerds?

Score one for The Zuck. Chicks love assholes.

Justin Timberlake is Sean Parker, the inventor of Napster, who inserts himself into the Facebook juggernaut when it is still in baby pants, with his smooth talk and language of largesse. He hits the sociological sea change on the head when he tells Zuckerberg “It used to be if you had a good idea, they’d say, ‘Good job, kid! The grownups will take it from here,’ but not this time!” He’s right – the whole idiom is a young person’s game. The grownups couldn’t’ve taken over even if they wanted to.

The last time I saw Andrew Garfield he was being overpowered charisma-wise and character-wise by Heath Ledger in THE IMAGINARIUM OF DOCTOR PARNASSUS; here he holds a prominent position as Eduardo Saverin, Zuckerberg’s best friend and co-founder of Facebook, one of the three male co-leads with Eisenberg and Timberlake; next, he’s Spider-Man. Gee, turn your head for one second. They grow up so fast…

Armie Hammer plays the Winklevoss twins, who try to sue Zuckerberg over Facebook being their idea. And I never picked it; the “twin” special effects are that seamless. In BACHELOR PARTY (1984) the Indian pimp tells Gary, “These are twins of pleasure!” Sorry, but that’s all I can think of when I look at the 6’4″, 225-lb, blond and built rowing champions, the Winklevosses. Ladies, can I get an Amen?

Story flits between Harvard 2003 and a “present-day” hearing over Zuckerberg’s ownership rights. Like Monty Python’s classic “Bicycle Tour” sketch, there is an integral Scene Missing from the story. From being staunchly against allowing advertisements on his “cool” website, where did Zuckerberg make that leap to commercialism and more importantly, how did he get so rich so quickly? It is clear that Parker steered Zuckerberg towards commercialism, but we never actually see “how” it’s done. 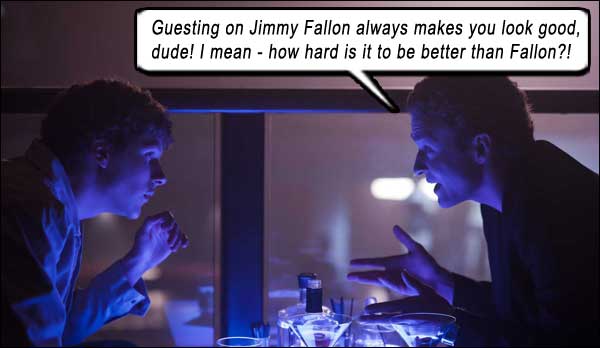 Daniel Lyons writing in Newsweek comments on facebook, zynga and all those companies that don’t “do” anything or make products, just being repositories for ads – which is a turnaround on Zuckerberg’s original concept of an ad-free playzone.

In the hearing scenes, Zuckerberg is already the world’s youngest billionaire, reminding his interrogators with diabolical intellectual cool that he can buy them many times over. From humble asshole to antagonistic asshole, his business cards simply state, “I’m CEO, bitch!”

I love the guy!

Feeling betrayed, Eduardo laments to Zuckerberg during the hearing, “I was your only friend. You had one friend.” The irony is not lost on us, who are being beaten to death with Facebook currently crowing of 500 million “friends” on its network.

The greatest irony is that a forum calling itself a “social network” is one of the largest contributors to humans becoming more ANTI-social. The themes of this movie – betrayal, power, revenge – only bear out that scarring, anti-social truth. When I take a break from that lonely desert called REALITY and make bi-annual visits to my own Facebook page, I see people holding conversations without me on my personal wall, planting farms, riding unicorns and having pillow fights with flat-bellied damsels in low cut panties they could never hope to meet in real life. What the hell is wrong with you people? Don’t call me your “friend” just because you add a jpg of pixels that resembles my face to your page – pick up the phone or knock on my door. Preferably wearing low cut panties.

But poke me and pull back a bloody stump.

From “Friends Without Benefits”
— by Daniel Lyons, Newsweek:

“The really interesting thing about this movie is that while much of the tale is invented, the story tells a larger truth about Silicon Valley’s get-rich-quick culture and the kind of people—like Facebook’s 26-year-old founder and CEO, Mark Zuckerberg—who thrive in this environment.

The Valley used to be a place run by scientists and engineers, people like Robert Noyce, the Ph.D. physicist who helped invent the integrated circuit and cofounded Intel. The Valley, in those days, was focused on hard science and making things. At first there were semiconductors, which is how Silicon Valley got its name; then came computers and software. But now the Valley has become a casino, a place where smart kids arrive hoping to make an easy fortune building companies that seem, if not pointless, at least not as serious as, say, old-guard companies like HP, Intel, Cisco, and Apple.”