Biting The Hand That Exploits You.

When movies address the supposed nobility of humanity (a fiction created by humans) we’ve got to look past the uplifting orchestration to the deep background on what is actually being sold. 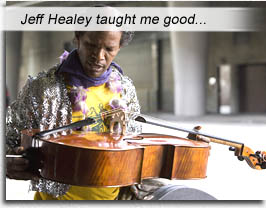 With THE SOLOIST, we don’t have to look too deep. It’s the story of Los Angeles newspaper columnist Steve Lopez (Robert Downey Jr), finding a story in a homeless Julliard-trained cellist, Nathaniel Ayers (Jamie Foxx, foregoing smoothness on the outside for smoothness on the inside). Set in 2005 and based loosely on two real life characters, I kept wondering why Lopez insisted on trying to help Nathaniel off the streets and into a shelter, against Nathaniel’s recalcitrance and downright ungratefulness at times.

Hmm, let’s see: Lopez is a newspaper columnist. What could he possibly want?

Lopez discovers the homeless, scatter-brained Nathaniel near a Beethoven statue; later hears him playing violin and strikes up an uneasy acquaintance with him. He researches Nathaniel’s tall tales of Julliard attendance, tracks down Nathaniel’s family and writes about him in his daily column, whereupon a kind old lady bequeaths Nathaniel a cello.

Lopez continues to push himself onto Nathaniel and eventually gets him off the streets and into a homeless shelter called LAMP (Los Angeles Men’s Project), situated one door down from Hell in Downtown Los Angeles. Skid Row, utter squalor, black people in aimless droves, smoking crack on the streets, fighting, sex, deaths… Los Angeles is one of the nation’s leading cities for homelessness – something for which the Asshole City Of The World is very proud, I’m sure.

Questions are raised as to how far Lopez can intrude on Nathaniel’s life to ostensibly “help” him. Lopez tells a psychiatrist “Force him to sit down with you!” but the psych argues that you can’t force people into psych evaluation, or even force prescription meds onto them.And we keep wondering: Just what is in it for Lopez?…

In a riveting scene, Nathaniel attacks Lopez for trying to make him sign papers diagnosing him as schizoid; Downey’s face seems to register real fear – an excellent performance.

Foxx is also on top of his game – as an actor, but not a cellist. His cello miming leaves a lot to be desired. Portraying someone who is supposedly a virtuoso at the instrument, he doesn’t do enough vibrato (a violinist once told me, “Just TRY and stop a string player doing vibrato!”). Playing cello in an orchestra scene, we clearly see two cellists behind Foxx, playing the same passage, vibrato all over the place, but though Foxx mimes the right notes, his fingers are way too stiff to be convincing.

Lopez wangles Nathaniel into attending a performance of the L.A. Philharmonic (with Esa-Pekka Salonen conducting, no less). Lopez and Nathaniel run Nathaniel’s junk-laden shopping cart through L.A. streets, right up to the backstage door of the Walt Disney Concert Hall. (Did that really happen?) And Nathaniel’s listening experience is portrayed as euphoric explosive mind-colors – but –

How dare the filmmakers presume to show us how Nathaniel perceived the music? He was a schizoid personality whom Lopez battled constantly to keep focused. Nathaniel is portrayed as an overlooked genius purely for dramatic purposes. But he is not. He was not denied his time in the spotlight. He was a little crazy to begin with; he had his shot and he shunned it. Just because he happens to play a supposedly “noble” instrument doesn’t mean he can’t be as off-kilter as C.C. DeVille, the drug-addled guitarist of Poison, who is a great technician on his instrument, but batshit crazy nonetheless.

We discover Nathaniel needs meds to keep those Crazy Fluids in check. But he was never a “genius.” How can I be so sure? Besides the inane babbling, moody indecision, and ragged unreliability portrayed by Jamie Foxx, we meet Nathaniel Ayers himself in the DVD Special Features.

While the real life Lopez and Ayers chat together, Ayers breaks into a Beethoven cello passage. Now, it may be his mental condition that keeps him from the recording studio or joining an orchestra, but it may also be that he’s not very good. His technique is definitely that of a string player (he has that vibrato that Foxx lacks) but there are many, many notes that are quite, quite flat. And all the while, Lopez commends him on how grand he sounds! Which leads us to another surmise: that Ayers relishes his small pond (where he is a legend to his kennel-crazy fellows) and doesn’t want to risk leaving it for a stab at responsibility, studied rehearsal, and getting lost amongst other mediocre players who don’t regard him as King Pompous Ass.

So shuck off that whitey guilt that was creeping up yo spine. Nathaniel didn’t end up homeless due to extreme bad luck; his own “inner demons” put him there. (Love dat “inner demon” euphemism bullshit – means we don’t have to diagnose further or identify solutions.)

And we discover this film is “from the book by Steve Lopez.” And all motivation comes clear. After his newspaper columns, Lopez scored a BOOK DEAL!

There are people in this world who genuinely seek to help others – news columnists are not those people. Steve Lopez’s relationship with Nathaniel was similar to Truman Capote’s with Perry Smith when he wrote In Cold Blood – academia curdling against humanity, friendship mixing uneasily with exploitation.

So though the filmmakers think their movie is focused on humanity’s “nobility,” we realize that with Nathaniel still on the real life streets even after Lopez’s publishing deal and this A-List movie – it is really about humanity’s IGNOBILITY.

Lopez wraps the film: “His mental condition and his wellbeing are as precarious now as when we first met.” Doesn’t matter too much now – Lopez scored a book deal – every writer’s dream. And I’m pretty sure Nathaniel isn’t getting any residual points on it…

In the film, the tragedy of homelessness is also addressed – but that problem cannot be solved without addressing state and federal governments that create homelessness through constructs in society that retain the disparate distribution of wealth. Again: ignobility on display.

Nathaniel Ayers is not a genius in any sense of the word. Still, in Hollywood, you don’t need to be a genius to make it. Just ask Bret Michaels. What you need is a story worth telling. And that’s something that Nathanial Ayers has in spades.

Steve Lopez tells us so in his book.