The Passion of the Goombah.

If you can get past Paul Newman‘s insufferable “schoolyard Italian” SOMEBODY UP THERE LIKES ME is… well, it’s still pretty mediocre. 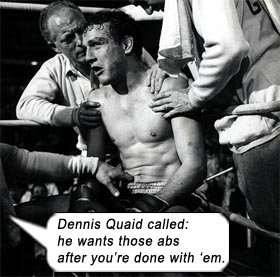 Directed by Robert Wise (THE DAY THE EARTH STOOD STILL, HELEN OF TROY), screenplayed by Ernest Lehman from the autobiography by Rocky Graziano and Rowland Barber, maybe this movie is painful to watch in 2013 because of all the boxing movies that have come after it, turning its storyline into a cliché in retrospect; maybe it’s the frigid two-single-beds relationship that is supposedly keeping Rocky aglow with love; maybe it’s Rocky’s arc from street hooligan to boxing darling that reads too contrived and predictable for compelling viewing – or maybe it’s just Paul Newman’s dumb Italian accent.

Newman plays an Italian like he’s in school with his friends making fun of Italians, utilizing the Jon Stewart Little Italy Mobster Accent, complete with shoulder gestures and pouty lips. It’s supposedly Method at its best; more like casting at its worst. If it weren’t for the ripped body and the sweet, sweet mug (often battered and Band-Aided), Newman would be completely unwatchable, as his portrayal of Graziano’s Italian-isms knock us right out of the movie.

Then shy Norma comes virgin-lusting after Rocky, even though she hates boxing with every fiber of her being, and even though he can’t sit through a chick flick with her – in other words, even though they have absolutely nothing in common. But apparently ‘love’ in the 1950s was hanging out with a person you constantly argued with about their life choices – and I thought that was called marriage. Which she also does to him, even though she is quite aware that boxing is the one thing driving Rocky’s pathetic and useless existence (he’s a thief, an Army deserter, a convict and a brawler, and the only reason he ever became a boxer was through the insistence of other people who saw they could make money from his lethal right hook; he also saw the means to make money and cared nothing for his natural talent or cultivating it). There’s not much to love about the pugilistic Rocky, neither is there much to grasp with the submissive, placid, non-personality Norma – nonetheless this movie shows them gravitating towards each other like an arranged marriage.

Film loses all credibility when it goes for a comedy montage of Rocky coming home with his face in various states of pummeling, and his baby crying at the sight of him, with Norma shushing the child, “It’s only daddy”; eventually, the child is older, and repeats that line to a shocked Norma when Rocky rears his battered face. Big laffs. In the very next scene, Norma weeps inconsolably to Rocky’s mother (Eileen Heckart) about how she worries over Rocky’s injuries! (Really? For the last five years’ worth of montage, you were gagging with your kid over them!)

Newman is supported by a slew of character actors that you will recognize as their older selves in upcoming movies: Harold Stone, Sal Mineo, Robert Loggia, and a bunch of That Guys – and a young Steve McQueen.

The last scene shows a street parade for Rocky in his proud hometown and echoes Julius Caesar’s Praetorian Guard during parades, reminding him that triumph is fleeting, as they held a wreath above his head while whispering in his ear, “Remember thou art mortal, remember thou art mortal.” Amidst the cheering, Rocky tells Norma, “Someday I’m gonna lose the championship, someday I’m gonna lose this punch, but right now I have everything,” and adds the film’s title, “Somebody up there likes me.”

All in that abominable Italian accent.