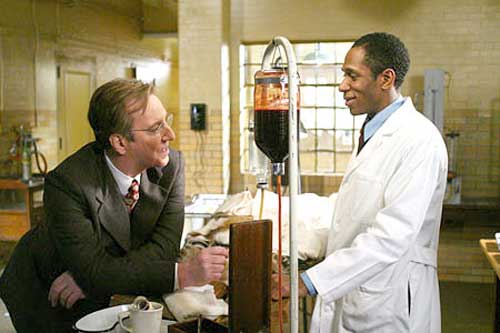 Apparently Mos Def is a rapper. But alongside veteran actor Alan Rickman, we’d be hard-pressed not to regard him as Rickman’s thesp equal.

A True Story worthy of movie status. Not another Viet Nam bore-fest or boxer’s tragic rhapsody or musician’s clichéd biopic, SOMETHING THE LORD MADE addresses an aspect so embedded in our modern culture we take it for granted – the story of the first heart bypass surgeries.

Alan Rickman is cardiologist Dr. Alfred Blalock (endowed with that god-attitude intrinsic to most heart surgeons), who arrives at John Hopkins Hospital in 1941 with Vivien Thomas in tow (Mos Def), his poverty-stricken, creative, resourceful lab technician.

Blalock and Vivien together create new disciplines in operating on malformed hearts. The means by which they arrive at solutions to their biological puzzles must seem simple and obvious to today’s heart surgeons, but it was counter-intuitive in those days when the medical profession’s idée fixe was that the human heart was so complex that Man should go nowhere near it. It was Something The Lord Made (which presumes – for people who believe “the Lord” had anything to do with the human body at all – that he either didn’t make everything else, or that he made the rest of it as simple as a cucumber).

The other prejudice in SOMETHING THE LORD MADE is that good old good ole boy standby – racism. Vivien is black, which, in those times, meant denigration, deprivation, and prejudiced dismissal at every opportunity. You know, exactly like today. Couple that with the fact he has no medical degree and the racial and medical prejudices are off the doctor’s charts. Though he had no formal education, the ambitious, autodidactic Vivien’s understanding of medical procedures was so innate he ended up advising Blalock in the operating room (on the special procedures for heart shunts they invented). To the chagrin of the all-white surgeon country clubbers.

Movie dramatizes and compresses all the double-prejudices. Only those who lived through those times would ever know the gutshock reality. Nothing can truly convey the utter contempt that the ruling white classes harbored for blacks – we can only be reminded by movies that such times existed. In this age when there is still much racism to be overcome, we cannot imagine how frightful it must have been for whitey to accept a black man in the operating room touching his innards. Especially a rapper.

If we’re to believe the end credits, the “blue baby” operations at Johns Hopkins launched the field of cardiac surgery.

I spent most of this movie on the verge of tears, for the greatness of these people. (And for the greatness of Mos Def’s talent in burying himself in this humble role.) Tempering my admiration – ego, politics, peer pressure. Blalock was a respected white doctor and there were times when he simply succumbed to passive racism for its political benefits. Yet when he needed Vivien most – in the operating room (his oft-repeated question, as he hunched over patients’ open hearts without the luxury of turning around, “Are you there, Vivien?”) – Vivien was always at his shoulder.

In Blalock’s defense, the prejudice aspects have a tendency to overshadow his achievements and courage. Blalock did, in fact, forge new methods for heart surgery. Give the honky a little sugar, EO activists!

Both their portraits hang in equal prominence at John Hopkins, and Vivien received an honorary degree for his work, achieving the recognition he neither sought nor cared for, but through the recognition, gaining his long overdue respect. But for Mos Def to win any sort of award for this magnificent performance, well, don’t turn blue holding your breath…