Something’s gotta give – Jack’s heart, Diane’s hips, or my patience.

Two white, upper class American senior citizens are thrown together, hate each other, and eventually fall in love. State of romantic comedy in America… yawn. 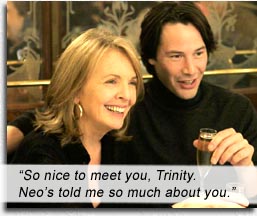 Erica (Diane Keaton) hates Harry (Jack Nicholson) because he dates her daughter (Amanda Peet), and he demeans her for being stuck-up. He owns record companies and she’s a best-selling author. Neither is deformed in any way or have brain damage or ugly pieces of vestigial twin hanging off their necks or inordinate amounts of freckles; they’re not wanting for food, shelter, health insurance, circles of friends… SOMETHING’S GOTTA GIVE – but what exactly? Conditions are so perfect for these two to hook up, what exactly has to give?

Thrown together when he has a heart attack in her Martha Stewart house while with her daughter, Harry is advised by the local heart surgeon Dr. Julian (Keanu Reeves – we’ll address this stunt casting in a moment) to rest up a few nights at Erica’s house. Daughter leaves for business, leaving Erica and Harry in abject Softening-Each-Other-Up mode. Who writes this crap?

Jack is charming, velvety and sharp. And Diane is as usual, numinous, quirky and bubbly. At one point, Harry simultaneously thrills and confuses Erica by telling her, “You are… a woman to love.” We imagine a man once said that to Nancy Meyers and now here she is twenty paranoid years on, still trying to decipher it through her dotty female characters. We all lose.

Amanda Peet is vanilla, and Starsky makes an appearance as her divorced dad. Jon Favreau passes by the middle background, as does Frances McDormand – but Theodore Logan Esquire steals the show!

In a stunning performance against type, Keanu Reeves as Dr. Julian is infatuated with Erica, admiring her for her talent first and (we presume) her bangin’ sexagenarian bod. He is unaware of Harry’s growing feelings for Erica and unwittingly becomes the Third Man when he dates her after Harry rejects her. It is a sober, studied, informed performance that will make you question whether the guy who did BILL AND TED’S EXCELLENT ADVENTURE, or POINT BREAK, or even SPEED, was Keanu’s Evil Twin.

Shot through with contradictions and double-standards: when Erica dates the younger Dr. Julian, she’s affirming her womanhood – when Harry dates the younger daughter, he’s a lecher. Erica dates Dr. Julian simply because he asked her, while gleefully admitting she is “in love” with someone else – and will as gleefully drop Dr. Julian when the “right” man comes along; once again proving that women will marry the “wrong” man (i.e. the one she is not in love with) simply because he asks her to.

The young audience who usually falls for romantic fluff don’t really want to see their grandparents grinding. And the old folk for whom this movie resonates should know better.