Another reboot for the best-looking zombie in history.

Someone, somewhere in the world, is seeing their first Jesus movie. Some 8-year-old, indoctrinated in Christian idiocy, is seeing for the first time those fantasy stories brought to life in this 2014 reboot of Christianity’s original superhero.

Therefore, though there will be a multitude of followers/believers inspired by this film to Love One Another As I Have Loved You, those of us who have moved past that platitude to Do Unto Others Before They Do Unto You will perceive SON OF GOD as the same old tale retold – about the Middle Eastern boy bitten by a radioactive angel, who becomes Caucasian with super powers. Aimed at the same SPIDER-MAN demographic: action movie fans.

Recounted by the Apostle John (Sebastian Knapp), the first half of SON OF GOD is a litany of Greatest Hits, as Jesus (Diogo Morgado) performs miracle after miracle, casting off those worthless things like plot and storyline. It’s SUPERMAN IN GALILLEE: filling nets with fish from a lifeless sea, walking on water, multiplying loaves and fishes, curing cripples, raising Larry from the dead, all done in that sexy Westernized swivel that keeps Jesus hot and his women fans hotter.

Gathering Apostles, halting the stoning of a woman (no mention of “whore” in this PG-13 panegyric), sermonizing on a mount, casting out the moneychangers, pissing off high priests – all the hits are here, and as with any origin tale, it’s mildly interesting to see how director/co-writer Christopher Spencer might put a fresh spin on framing them. Apart from that, it’s the same old shopping list.

There is a woman in the gaggle of 12 Apostles, for whom I had to consult the Bible on her identity; upon finding no mention of her, I’m assuming the Apostles are now Matthew, Mark, Luke and Caitlyn. Mary Mother of God is a lily-white model from Warwickshire (Leila Mimmack), and older Mary is a Botoxed lily with an aquiline nose from Northern Ireland (Roma Downey). Just like it says in the bible.

And Jesus Christ [used as name] – whoa! Jesus Christ! [used as expletive] – is Portugese-born Diogo Morgado, a light-skinned stunner with wavy, flowing locks, speaking in a pseudo-British accent. Because that’s the only way you get funding to do a Jesus movie in the Western World. White Savior or go to hell. Meanwhile, all the actual denizens of the area look like old Jewish guys with hooknoses, i.e. Mel Brooks or Gene Simmons – but the Jewish Middle Eastern messiah is a runway model from Birmingham.

SON OF GOD is a compressed feature film version of the ten-hour miniseries THE BIBLE (aired on The History Channel, March 2013), and includes much footage from that series. (Thus the introductory sequences highlighting Genesis are able to show large-scale scenes of Adam and Eve, Moses, David and Goliath, etc., which would have been ridiculously cost-prohibitive if they were only made for their few seconds; they are actually from larger scenes in the miniseries.) 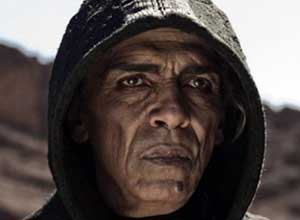 I am the Way, the Truth
and the Affordable Healthcare.

THE BIBLE featured Mohamen Mehdi Ouzanni (a veteran of biblical movies), who played Satan – in whom Republicans immediately saw a resemblance to President Obama. Given that the deranged Republicans see President Obama in anything Satanic, for this they could actually be excused – because Ouzanni in full makeup looked strikingly like Obama! So because of that coincidence, in this movie, Jesus gets a pass and DOESN’T have to meet Satan. The producers simply cut those scenes from SON OF GOD, to “remove the focus from Satan.” Thusly diluting the hero (if you know anything about good storytelling). Y’see, Satan tempts Jesus to abandon his quest to save Mankind, in return for all the kingdoms of the Earth. In Jesus’s refusal of that bribe, we see his motivation: not for personal gain, but to unselfishly save others. In SON OF GOD, Jesus has no motivation. Like every Jesus movie, the producers bank on our prior knowledge of the story to subconsciously implant that motivation in the hero.

It is a fine production, filmed in Morocco. The design is appropriately medieval and beautifully shot, the performances are exceptional, bringing tears to our eyes during the final emotional scenes of a mother helplessly watching her condemned son, and it even boasts its fair share of that sensual torture-porn that Mel Gibson taught us how to love. But the movie itself brings nothing new to the tale. Knowing the Jesus myth so well is to the film’s detriment. Like the world’s oldest known poem, Beowulf, unless one has an interesting take on it, there is no reason to repeat it. Writers Richard Bedser, Colin Swash and Nic Young, and director Spencer have nothing new to say about JC. (Why did this film need four writers anyway? It’s already been written by Matthew, Mark, Luke and Caitlyn.) This is not Scorcese’s humanistic LAST TEMPTATION OF CHRIST, nor is it the muscular tribute, JESUS CHRIST SUPERSTAR; even Mel’s PASSION OF THE CHRIST was a studied departure from the norm. SON OF GOD is merely an unremarkable, unbold updating of KING OF KINGS, and we can only stomach that lachrymose gospeler but once.

Although the producers did take a page from a biblical movie much more authentic than theirs: the choosing of Barabbas over Jesus is staged exactly like Monty Python’s THE LIFE OF BRIAN!

At nearly 140 minutes, like every Jesus movie, the latter half of his life is laboriously focused on, from the Garden of Gethsemane onwards. And the writers do insert some “new” elements here. I’ll forego ranting about the scarring of your children when they are offhandedly shown macabre tortures in Jesus films (a crown of thorns – fer chrissakes?! Censors have aneurysms over a nipple shot or someone saying blowjob, yet giddily encourage kids to watch Jesus movies portraying torturers shoving a ring of thorns onto a man’s head and drawing blood!) and I’ll just speak of the macabre tortures themselves. In this film, the Journey of the Cross seems especially bloody and painful, with an exceptional performance by Morgado. After carrying his cross to the crucifixion site, he drops it in utter exhaustion. And – here’s the original scene – the Roman soldiers whip him into crawling to the cross and falling onto it, bloody and battered, in that “Jesus pose.” I’ve never considered that before: that a man who is thought of as less than a man, would not simply be hauled onto the cross; that his torturers, who have the propensity to fashion a crown of thorns (–a fucking crown of thorns!), would think nothing of extending his torture to whipping him into crawling onto his own cross like a broken-backed mongrel dog! 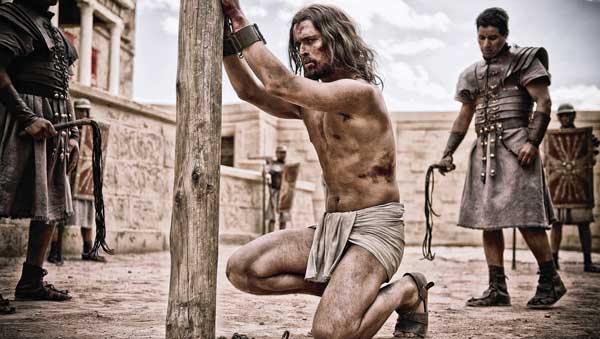 Then – another original concept re. that “INRI” sign at the top of the cross: Pilate orders an announcement displayed over JC – “Jesus, king of the Jews.” The Judean high priest counters, “Make it say, he CLAIMS he was king of the Jews,” but Pilate insists, “It stays as I commanded!” So that old sign which we’ve always been told was the soldiers mocking their captive, is repurposed here as Pilate mocking the Jews – those high priests who caused him so much agita by forcing him to commit unsavory legal murder on their behalf. These original elements are noteworthy, but too little to save the production.

Then the twist: Jesus comes back to life! Christ-y Tales Of The Unexpected. Again I ponder back to youth. At some point, you never knew this denouement. You had to be told. In your nappy-wearing youth, you accepted it. You didn’t have the knowledge or experience to process the idiocy. This was the state of the Apostles’ brains, for when they discover Jesus’s tomb empty, they never once consider grave robbers (for such a famous person) or any other possibility OTHER THAN, “Well, he must have risen from the dead then!” Y’know, there’s a word for reanimated people – zombie. Lazarus was the first. Jesus is the second zombie in Western literature.

Final scene: Zombie Jesus appears to John and proclaims in sensual sotto voce, “There will be no more death, or mourning, or crying, or pain…” With school shootings, police killing black people for no reason, Republican wars, Obama drone strikes, and cancer, and Ebola, and that earthquake in Chile, and that hurricane in Utah, and all those people who died on the news just last night, uh, how’s that working out for you Christians?