CAVEAT LECTOR: This one’s not for everyone: if you’ve ever tried healing your gammy leg or brain cancer by visiting a TV preacher and “believing” that god will heal you – you might want to entreat your invisible, unseen, unheard, unfelt deity to strike me down for this article. Let’s see if I outrage His Imaginary Highness enough… (call me tomorrow – if I’m still alive it must mean only two things: god don’t care OR I’m more powerful than he is. You decide.)
Please leave all snarky comments at the bottom of the review. (I need a good laugh.) 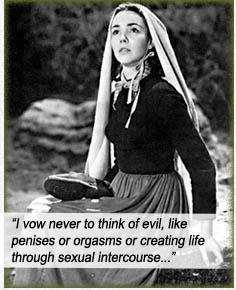 One of humanity’s greatest miracles: a miracle that the world heeded an 1858 French peasant nutjob, Bernadette Soubirous, who claimed to have seen 18 “visions” of Virgin Mary near Lourdes; a miracle that people still fall for the fantasy of a VIRGIN giving birth; a miracle that the catholic church (which gained its precedence through murder, bloodshed and terrorism) could somehow be regarded as “holy”…

THE SONG OF BERNADETTE is such an aggregate of fractured fairy tales, it’s a miracle that humans ever developed the technology to land on the moon.

Bernadette (Jennifer Jones, in eternal soft-focus – cos she’s “blessed,” see) causes such a stir in the French town of Lourdes, behaving as erratically as any mental patient (claiming visions, hearing voices, piling mud on her face, digging in the dirt, fainting), that a church is founded on the site. As with all great religions, enough lunacy will guarantee tax impunity. (The So-Crazy-It-Has-To-Be-True gambit. Works every time.) The clergy and laity all dissent at first, but eventually come around to the “right” choice – stupidity. The vortex of lunacy is so strong that even legends Lee J. Cobb and Vincent Price get pulled into the kookiness.

This movie would not be so wretchedly dangerous were it not for inculcated christians regarding it as factual history. As far as the delusional pumpkins of the world are concerned, this is a Reality Show.

I hesitate to pump over-used adjectives like “pious,” devout” or even “religious,” as this movie is about as pious, devout and religious as STAR WARS, i.e. a wild fantasy. Faith-mongers, it was made by Twentieth Century Fox, a movie company intent on getting your popcorn-butt into a darkened seat and selling your soul to their consumerism devil. It is not praising christianity or miracles. Although one could never tell with the movie’s mawkish bent. From the Franz Werfel novel of the same name, director Henry King and screenwriter George Seaton adopt the skeptic’s stance (to retain nominal street cred) and are careful that Bernadette never actually claims to see “Virgin Mary” but “a beautiful lady,” which is like saying George W. Bush never actually said Iraq was an “imminent” threat so he can’t be prosecuted for murder for taking the country to war under false pretenses – but we know how the tap-dance skewed the message to mean “imminent” without actually saying it. So too – if ten-thousand people are saying “Hey, it’s Virgin Mary!” and Bernadette never denies it, we know what she is saying, film-makers.

We know what YOU are saying, film-makers.

You are saying that “miracles” – no matter how heatedly your film characters denounce them – are real. Idiotic sirs, miracles – by their definition – are not real. And miracles do NOT just happen, to peasants or “holies” alike. But hallucinations DO. And you don’t have to do mind-bending drugs or fuck little boys to have them. It’s how the human brain is imperfectly constructed. It’s why cancer genes “turn on” suddenly; it’s the reason for “chemical-imbalance” rages and depressions; it’s “daydreaming” and “nightmares” and “UFO sightings” and “claiming the burglar had red pants” when he had blue…

And not just any harmless miracle. This “miracle” turned the nondescript vicinity of Lourdes into a site where the sick could have their infirmities cured, by bathing in the water of a spring that issues from the grotto where the unsexed mother of the crucified jew supposedly appeared. Can anyone truly measure the amount of torment and loss “believers” have endured for such insanity?

The grandest joke of all is that the real life town, after initial recalcitrance (due to inculcated fears over being struck down for disrespect, no doubt), realized the TOURIST DOLLAR far outweighed any punishment the evil christian god could visit on them for blasphemy and embraced the farcical charade, raking in billions for the town. Which, we realize, is what True Christianity is all about – the cash.

Einstein said: “Only two things are infinite, the universe and human stupidity, and I’m not sure about the universe.”

The grotto supposedly cures the sick – delusional pumpkins still believe this fakery even though they leave Lourdes with the same limps and the same cancers they brought with them; if the grotto would cure people of their boundless stupidity – that would be a real miracle…

2 Comments on “THE SONG OF BERNADETTE”