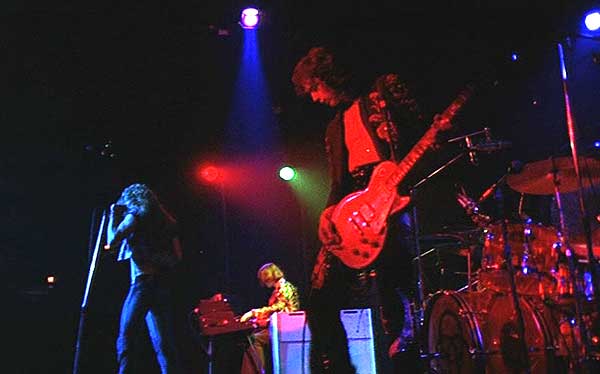 Let the Music be your Master… and the bellbottoms.

The Piper’s calling you to join him…

Led Zeppelin’s catalog is a testament to young men and their libidinal drive.
— The New Yorker.

At the time of this film’s release, the British rock superstars whom many considered the wellspring of the heavy metal movement itself were at their peak. Zeppelin were one of the elite few bands whose members were all equally revered for their respective disciplines: John Bonham (drums), John Paul Jones (bass, keyboards), Jimmy Page (guitars) and Robert Plant (vocals). Revered by fans – and feared by hotel managers the world over, for their furniture defenestration, groupie insemination and extremely tight trousers.

THE SONG REMAINS THE SAME features not only concert footage, but visual interludes during the onstage performance that explore the “fantasies” of each band member.

John Paul Jones – the mega-man behind the mighty men, introverted, solid as a castle built on megamanthium, bass wallops and ethereal keyboard flourishes; during No Quarter, as liquid nitrogen blankets the stage, with Jones on spooky organ “…the winds of Thor are blowing cold…” he rides the moors in cloak, top hat and deathmask. Home to the castle, a warm family reception, young happy kids, servants, English hounds and hot wife. Dig. 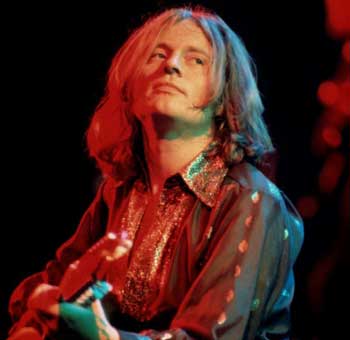 The devil in Mr. Jones.

Before Viagra, there was Robert Plant. Young males would gaze upon the leonine Plant and intrinsically glean the angle of strut they would have to adopt in order to score young girls. And young girls would look at Plant and, well… be scored. While he wails the title track The Song Remains The Same, “I had a dream. Crazy dream. Anything I wanted to know, any place I needed to go…” Plant rides a white horse as some kind of fey knight, rescuing a busty blond damsel from a guarded tower with his trusty falcon and big-assed steed. 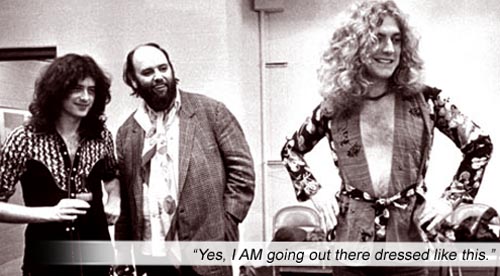 As teens with a propensity to believe anything outrageous, most of us sincerely thought Jimmy Page was in league with the Dark Prince, the Bringer of Light, an occultist, a prophet, a doom-sayer, with his Zofo symbolism and Poseidon strut. This film does nothing to dispel that notion. During Dazed and Confused “Take it easy, baby, let them say what they will. Tongue wag so much when I send you to Hell…” the prophet brings out his staff – a violin bow – and, in the words of my freak guitarist friend who spent that night in jail with me, brings forth “devil’s music” as he eerily bows the guitar… as his avatar climbs a rocky mountain, at the pinnacle of which stands a wizened white-cloaked hermit with lantern and staff (seen in the gatefold sleeve of Led Zeppelin IV – or whatever mystic epithet the diehards call that album). Page attains the summit, reaches out to the hermit – and we see the hermit is – HIM! “What a twist!” our young, teenaged minds gawped! Surely this man is the very son of Lucifer!

As preeningly priapic as Plant was, Bonzo was the visceral pithecanthropic pounder. John Bonham, the cave-dwelling drum god who can make 4/4 somehow sound like 17/8; his drum solo (during Moby Dick) incorporating passages of superhuman speed; reflected in his fantasy of being a race car driver and fast-living stallion. 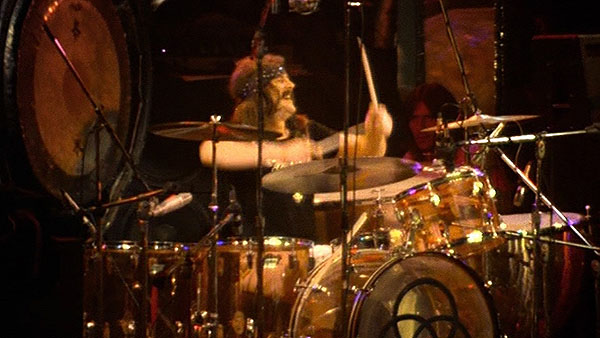 Film includes backstage footage of the band, and features many vignettes with their man-mountain manager Peter Grant, throwing his considerable physical and managerial weight around, at one point chastising one of the security staff for not stopping the sale of bootleg merchandise, using c-words and f-words and any other alphabet-words his gangsta cockney can summon up in his entrepreneurial rage.

Whole Lotta Love closes the maddening mystical tour, in flames and honey-dripping sexuality, in zinging theramins and werewolf wailings; by the time the flashpots detonate in the song’s finale, it is like Olympus has exploded, as Plant shoves his member in our faces, Bonham and Jones beat thunder, and the wizard Page strides through the mushroom-cloud melee carving music into pentacles.