The Antisocial Truth behind the Socially-Acceptable Fiction.

THE SOPRANOS leans heavily on Freud. And I’m a Freud kinda guy (over a Jung kinda guy – as I am a Nietzsche Kinda Guy over a Kant Kinda Guy – and no, I did not appreciate the shot at Nietzsche in Episode 20 (“D-Girl”), “Nietzsche wound up talkin’ to his horse”). Freud postulated that, among other things, dreams are a form of “wish-fulfillment” – and this Episode 30 conveyed that aspect in layered spades. 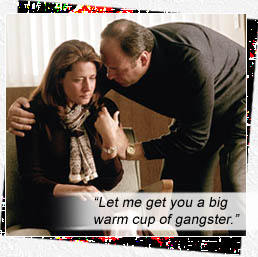 The popularity of THE SOPRANOS stems from its wild truthfulness – even if that truth flies in the face of political correctness. In this episode, psychiatrist Jennifer Melfi (Lorraine Bracco) is raped, and contemplates turning to a force that she knows can wreak awesome revenge for her – Tony Soprano.

When The Law feebly admits its impotence in bringing the rapist to “justice,” we are all confronted with that naked truth that Justice is truly only a euphemism for Revenge. (We feel justice has been done only when the level of retribution has sated our desire for revenge.)

THE SOPRANOS originally staked its premise on the anti-socialism of its protagonist, Tony Soprano (James Gandolfini), and his attempts to ‘better himself’ through society’s prescribed means of cure – psychiatry. Though the humor in this concept was not lost upon us, the incongruity touched a deeper vein of introspectiveness. We were constantly called upon to ask ourselves, “Is this man irredeemable? If so, ‘irredeemable’ from whose point of view? And if he is incorrigible, can any form of prescribed cure work for him? And if none can, why do we continue to watch this futile exercise with such a surfeit of lascivious pleasure?” This episode, more than any before it, brought forth that hypocritical paradox that Society must face every single day of its ‘civilized’ life: though it tries to suppress (read as the euphemism ‘heal’) all those who supposedly cannot control their violent/primal impulses, ultimately it would like to be able to address its issues AS DIRECTLY AS a person in Tony’s world addresses his, without having to analyze and repress emotions. And that’s why we all marvel, mouths agape, at the intensity of Truth encapsulated within the framework of this fiction.

As Melfi was spouting non-PC retribution against her malefactor, venting to her own psychiatrist, we are forced to assess our own inculcated morals. Only now can those in Melfi’s insular caste understand the measures that must be taken – and why those measures need to be taken – in certain circumstances. If it only seemed like a worn cliché before, now Society in Melfi’s echelon can truly comprehend what Tony and his ilk mean when they say, “This thing of ours – it’s a thing of honor.”

Melfi’s son, Jason, understood – as all humans do in their reptilian brains – that the only honorable thing is grim retribution. But ‘civilization’ has decreed dysfunction on all those who would act impulsively. Why? (As Tony once said, “cos if dey got Gary Cooper in touch wid his feelin’s, then it’s dysfunction dis an’ dysfunction dat and dysfunction buh fungul!–” ) At first, Jason is made to look anti-socially impulsive – but after Melfi fell victim to The Law’s callous handling of her case (the rapist was captured and subsequently allowed to walk on a technicality), both Melfi and we are shocked into realizing that Jason was right.

No Repression, No Dysfunction, No Therapy Required.

Ironic that Melfi’s epiphany of how violence can be used to solve psychological noxae should come in the form of violence visited upon her person. Now she realizes how ultimately cogent Tony’s world view is, in relation to her fragile, sheltered existence.

She dreams of a ferocious black dog that threatens her while her hand is caught in a vending machine. Though fearful of it, in her dream, she was suddenly confronted by a greater peril – her rapist, whom the black dog attacked. It was obvious that the dog represented Tony Soprano: a fearful presence, yet with the potential to protect and avenge her.

Public perception of The Law is along these same lines, yet Melfi realizes that although it looks like it’s there to protect/avenge wrongdoing, ultimately, through bureaucracy, injustice and inefficiency, it ends up stultifying and destroying what it has been instituted to preserve.

Melfi wanted Tony out of her life because she did not want to get drawn into his world – but after the rape, she wants him as close as ever, jarred into realizing the benefits of that world.

After spending the last few years vicariously drawing titillation from Tony’s proximity (and, by association, his proximity to the underworld), Melfi now comprehends exactly how wondrously violent Tony’s world must really be. And she senses, more than ever, his potency. She now knows that the element that wounded her so nonchalantly could just as nonchalantly be decimated through the power that this man wields so comfortably. One word from her to him – and her assailant would be nonexistent. Yet she cannot bring herself to unleash that power because she realizes how all-consuming it will be. Once tasted, like heroin, she would crave that taste again and again. No indiscretion would become too small for her to avenge. Her fate, her mind, her body, would all become Tony’s possessions were she to “ask a favor” of him.

In assessing the strength it requires to AVOID acting upon every impulse, Melfi now also realizes just how powerful this man is, in refraining from those acts which he could accomplish so very easily.

Lorraine Bracco scaled new heights in her portrayal of this character whom we thought had attained a ceiling of complexity. Her turmoil was incredible to witness. Her character ultimately had to concede that since she had relinquished her will to the beast of Civilized Society, she could never set foot on that dark road that Tony stands upon, where he waits for the slightest sign from her, to lead her down it.

The episode’s last lines were like thunderheads, as Tony asks, “Is there somethin’ you wanna say to me?” and Melfi pauses, then replies with a soul-empty, “No.”