A Sound of Chunder.

A Sound of Thunder. One of the greatest short stories ever written. By one of the grandest Grand Masters of Fantasy, Ray Bradbury.

A SOUND OF THUNDER. Vomitous movie. 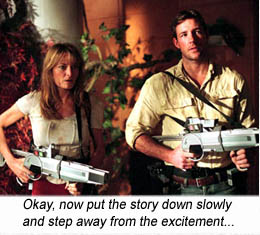 In Bradbury’s science fiction short story, a company called Time Safari offers big game hunters the opportunity to go back in time and kill dinosaurs. Rule Number One is: Stay On The Path, a floating metallic walkway that ensures no interaction with the prehistoric environment. During a hunt, a man steps off the path and inadvertently crushes a butterfly. When the hunting party returns to the present – the world as they know it has drastically changed. Though there are paradoxes in any time travel story, Bradbury’s tale was a quick jugular stroke, a parable of the ripple effect.

A Sound of Thunder was published in 1952 (according to Wikipedia, the most republished science fiction story of all time), and illustrated Chaos Theory, Darwinism, and The Butterfly Effect (which would only be coined in the 1960s by Edward Lorenz). In Bradbury’s story, the wonder of time travel was overshadowed by corporate greed, in turn overshadowed by the mortal danger to humanity’s existence itself.

While in the movie A SOUND OF THUNDER (directed by the uneven Peter Hyams, CAPRICORN ONE, 2010: ODYSSEY TWO), a clutch of bad actors goes through the time portal again and again to try to rectify their mistakes, like an excrement version of BACK TO THE FUTURE. The movie has nothing to do with Bradbury’s powerful tale, except the initial jolt of the time traveling prehistoric hunting party. Egregious liberties are taken with Bradbury’s story – baboon-faced reptiles, plants overrunning Chicago’s concrete, time waves rippling through the city, CGI insectoids – for which Bradbury should sue the pants and underpants and ass-hairs off the filmmakers.

Novice writers Thomas Dean Donnelly, Joshua Oppenheimer and Gregory Poirier should start a Big Balls Agency, for thinking they could actually add elements to a Ray Bradbury story that would improve it. How do these guys walk in a straight line with balls this big?

Ben Kingsley is the corporate owner of Time Safari, with a hairpiece so bad he looks like Burt Reynolds, Edward Burns is his dazed and confused lead hunter, Travis, and Catherine McCormack (who was Murron MacClannough in BRAVEHEART) is the scientist with the best breasts.

I can’t possibly relate the hundreds upon thousands of egregious stupidities and asinine pieces of dialogue, but here is just one, spoken by David Oyelowo as some kind of “scientist”: he refers to the Pleiades star cluster, “The Seven Sisters, they look like stars, don’t they? But each of them is a whole galaxy.” Uh, no, idiot scientist, they’re actually, uh, stars.

Those three morons who rewrote Bradbury’s story forgot they didn’t know anything about physics or astronomy. Or writing.

Best part of the movie is Catherine McCormack’s chest straining against her disheveled one-size-too-small blouses.