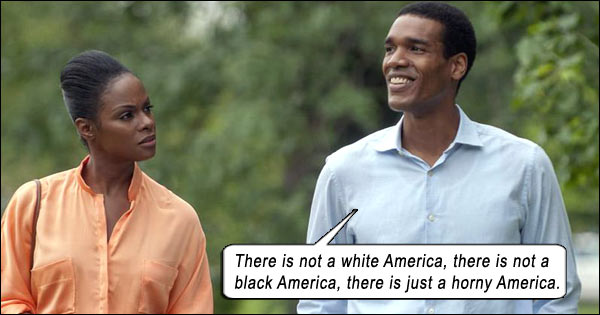 Barack Obama gets to first base!

SOUTHSIDE WITH YOU details the birth of Barack Hussein Obama in Kenya, and how his Nazi mother and Black Panther father conspired with the hospital into forging an American birth certificate, so that their son could infiltrate the presidency and destroy the United States with his muslim sharia ways…  Okay, now that the Republicans have orgasmed and gone to sleep, the adults in the room can talk.

Simply put, SOUTHSIDE WITH YOU follows the fictional first date of Barack Obama and Michelle Robinson in 1989; a disarming, dialogue-driven gem amongst the summer glut of iron men, Pretty Orange Explosions, lame sequels and dumb remakes. “Fictional” because director-writer Richard Tanne (in his first feature) admits that besides a few key scenes, most of the events shown occurred on various dates, and the dialogue between the couple is imagined, not note-for-note.

Parker Sawyers is 28-year-old Barack and Tika Sumpter (also co-producer) is 25-year-old Michelle. As the film progresses, the more they look and sound uncannily like the real deal. Comparison with Richard Linklater’s BEFORE SUNRISE series is inevitable – a couple on a talk-date, searching out each other, falling in love. But would we be so rapt were it not for this being the First Black President?

Michelle is Barack’s advisor at the law firm he has joined as an intern. He has asked her to accompany him to a community meeting. She is insistent on not calling their outing a “date,” and for good reason – it would cast aspersions on her integrity at the law firm. She outlines how much better she has to be – as a woman AND African-American AND lawyer – to be taken seriously by the white male partners. Meanwhile, we guys KNOW what Barack is doing: he has the scent of panty in his nostrils, like the lion stalking the gazelle, and he amusedly acquiesces to her request – just waiting for that moment to pounce. Guys have conditioned themselves to tolerate an inordinately insane amount of insensate, irrelevant yapping on first dates. It’s what we do. It’s called Cultivation. The reward? Panty.

The best aspect of SOUTHSIDE is that it avoids that annoying “foreshadowing” written into scripts about famous people in their youth. (The trailers squash all those lines into one place, but the lines do not sound as schmaltzy in context.) One could never tell this will be the most powerful couple on Earth someday. Yes, they are intelligent and have big dreams (Barack muses about writing books, “…maybe hold a position in civil rights.” Michelle asks, “Politics?” His answer, “Maybe”), but this is simply a movie about a young man trying to get laid. He happens to be the currently-sitting President of the United States.

Over the course of the day-long date, the couple touch on various topics: racism, religion (skirting it so ambiguously that we just know both Barack and Michelle are closer to atheism than any prescribed “presidential” religion), background (Barack admitting: “high school is lost in a cloudy haze” – marijuana), and parents (Barack’s Kenyan father, Barack Sr. – an “incomplete life” – to which Michelle advises “…forgive your father so that you can live better than him” – the seed planted for Barack’s cathartic book Dreams From My Father?).

Barack blindsides Michelle, by taking her to an art exhibit (featuring the art of Ernie Barnes – the artist behind the magnificent hyper-real paintings on the TV show GOOD TIMES); they have lunch, walk in the park, engage in tribal dancing, and then, to cap it off, that community meeting – where Barack knows he is going to kill. Now whether the audience knows of the current President’s knack for soaring, inspiring rhetoric, this last tactic is like a bandguy inviting a chick to a gig – we know they will see us in our prime, worshipped by all, dominating the environment with our expansive aura and massive genitals… Rock stars.

And it works. And Michelle knows it, “It’s a pretty good place to take a girl: surrounded by people who adore you, an inspirational speech that has people in awe; people spreading heart-tugging stories about you…” Yet this is another example of Tanne’s controlled writing and direction: he could have turned this moment into a grand foreshadowing of Barack Obama speechifying like a future president, but no, he keeps it provincial and low key, yet with the clear hints that this young man has a charisma and verbal command to inspire legions.

Not forgetting SOUTHSIDE is pure date movie – not politics – Barack’s speech touches  the personal level, when he looks directly at Michelle and talks about the advice she gave him earlier that day, to walk in another’s shoes – “A friend taught me that.” At which point, we presume, panties could get no wetter.

Musician John Legend, very prominent during the 2008 Obama campaign, is a co-producer, and provides the original song, Start. 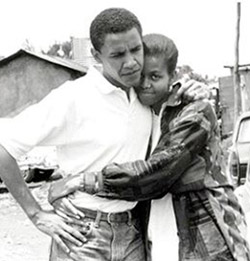 The Obamas: of love and power.

One day, this movie will simply be a montage for a grander, more detailed biopic. It’s a quaint humanization of two people who have become larger than life. At times, it might be regarded as unfair to Michelle, who may come off as snarky, with her almost-elitist indifference to Barack, while the chain-smoking Barack just comes off as cool, happy-go-lucky, with a deeper turmoil caused by his abandoning father. At the end of the day, he is definitely the Cool McCool in the room. The confidence of this guy! Cultivating his supervisor! The drive, the will, the smoove – to wear down this fine trim on one epic talk-date that would drive lesser men to Rufies.

They see Spike Lee’s DO THE RIGHT THING (1989) at the cinema, a fitting contrarian film to this actual film. Both Lee’s and Tanne’s films occur over the course of one day, one story ending in violence, one in romance. By this stage, Tanne has become so adept at his characters’ dialogue, that Barack can actually outline the controversy surrounding the ending of that film to some white patrons without sounding fake or didactic.

After they are “busted” together at the movie by the boss of the law firm – date argument! Uh-oh, the night is almost over, patience worn down to a nub, how does Barack salvage this one?… His solution is so elegant, as they share a first kiss over chocolate ice cream, we think to ourselves, no wonder this guy convinced a country to vote for him twice!

When you walk out of SOUTHSIDE, you feel a genuine warmth. And knowing where this relationship will lead – through the most powerful office on Earth – will coax a single tear. To think that these people who inhabit the highest offices in the land were once truly exactly like you or I – young enough to simply wonder how to put my hand on it, or how to touch my mouth on it. Movie fades on Barack and Michelle back in their own homes, contemplating the night in a heady romantic swoon. There are no end titles about the actual political and career achievements of the couple, or the presidency that would come 19 years later; nothing to spoil the promise of two young lovers poised to climb over each other in the near future.

But let me break it down for the Republicans who have just walked back in the room. SOUTHSIDE WITH YOU ends when forensic expert Donald Trump, who sent teams to Hawaii, provides incredible evidence that Obama’s birth certificate is fake, and Obama is deported back to Kenya; Obamacare is repealed and replaced by people dying in the streets; and the Republicans and the Ku Klux Klan live happily ever after, and many people were saying this, and these are very smart people, it is so tremendous it will make your head spin, I have to tell you, people tell me all the time, believe me, I guarantee it, I guarantee it.