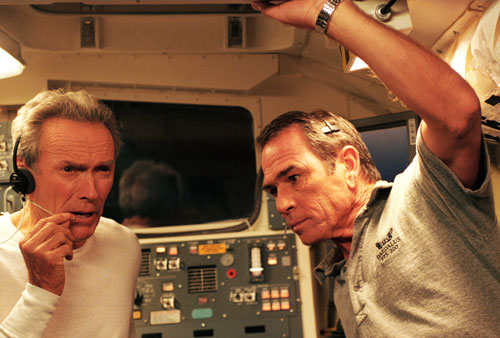 There is a rare breed of animal in the world, outside any established morality, divorced from mundane reality, mythically above many of its technically superior kin; that animal is – The Clint Eastwood Movie. 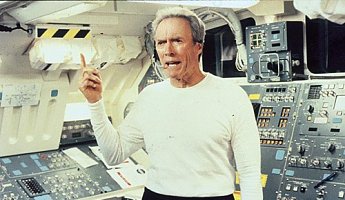 “… yeh well, right now we’ve got bigger problems. We’re halfway to the moon and I STILL don’t know what any of these buttons do!”

The edge-of-plausible story involves four test pilots who, forever glum over being excluded in 1958 from NASA’s fledgling space program, find themselves jubilantly piloting a Space Shuttle into orbit to repair a Soviet satellite – 40 years later!

The hook that makes this ridiculous-on-paper scheme surprisingly good onscreen is that the four pilots, known as Team Daedalus, are Clint Eastwood (Frank), Tommy Lee Jones (“Hawk”), Donald Sutherland (Jerry), and James Garner (“Tank”), four well-loved actors who imbue the shaky storyline with freely-punning maturity. Being a Clint Eastwood Movie, Frank is the one person on Earth who can repair the outmoded guidance system on the satellite, before it de-orbits and places cities in jeopardy. With screenwriters Ken Kaufman and Howard Klausner maintaining our suspension of disbelief on the Sensible side of ARMAGEDDON and RED PLANET, director Eastwood explores – through his laconic wit and casually-paced, character-driven style – exactly what makes these implausible candidates for this mission such plausible Heroes. Well, excepting maybe James Garner…

Despite their ages, Jones and Eastwood are still two very vital leading men, zealously fit and believably tougher than most comers half their age. Sutherland, as cheeky comic relief here, also seems sturdy enough for extreme g-forces. But since Eastwood’s last outing with Garner in a 1959 episode of MAVERICK (co-starring as a scrappy gunfighter to Garner’s gambler), his machismo has only elevated, whilst Garner’s aged frailty makes his character “Tank” look more like a “Yugo.” 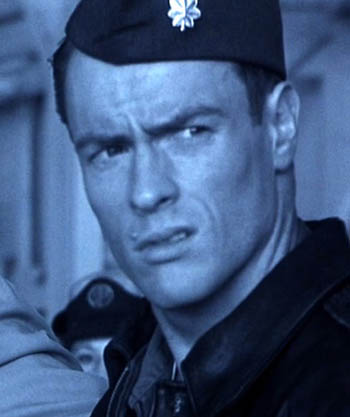 A young Toby Stephens – or the next Man With No Name?

The Casting Director scored big with Toby Stephens (playing the 1958 young Eastwood character), who nails the Clint Squint like a ghost from RAWHIDE; visions of a present-day Man With No Name picture riding across the High Plains of our speculation… hmm. Stranger things have happened – to wit: this movie’s plot.

If this were real life, we would surely question the integrity of a space agency that would allow out-of-shape sexagenarians into billion-dollar taxpayer equipment. NASA Supervisor, Bob Gerson (James Cromwell, uncharacteristically mean-spirited), does try to quash Daedalus, issuing an ultimatum that they must pass rigorous astronaut muster or remain earthbound. But he forgets he is in a Clint Eastwood Movie…

Never losing sight that “entertainment” is a movie’s prime objective, Eastwood’s four stars exude an effortless camaraderie, imbuing the film with a humorous, self-deprecating slant at what a Hero must endure when past his Use-By date.

When Frank’s team discover nukes onboard the “communications satellite,” we turn to the token Russkie, Rade Sherbedgia (go-to Russian Character Actor), to provide the furry face of Soviet Collusion at Houston, with an anemic performance that really goes nowhere but vanilla. I guess Cold War apathy extends to film as well.

Though the outer space milieu is not Eastwood’s forte, he handles these sequences with such care, dexterity and attention to detail that he escalates the grandeur of being in earth orbit to a scale that rivals the best films ever made in this genre. On the crew’s first spacewalk, there is no desperate clamor to “cut to the chase” – rather, Frank, floating free, first quietly watches the earth turn beneath him. Houston Flight Director, Gene (William Devane, playing his role with extraordinary realism), adds simply, “Welcome to space, Frank.” Jerry joins Frank in gazing Earthward for a few languid beats, as Italy and Western Europe float by in a magnificent Industrial Light & Magic planetscape.

Emulating his mentor Don Siegel, Eastwood’s trademark pullbacks have always revealed the grander cityscape backdrop his characters played against; this film lending him the grandest backdrop of all: planet Earth! During Shuttle re-entry into Earth’s atmosphere blanket, Eastwood gives us long shots of the globe, with all the solitude, quiet majesty and obliviousness of this world as that jot of man-made, friction-flaming steel traverses its face.

Having somehow wrangled his team of cowboys into space, the accusations throughout the movie against Frank – that he is not a “team player” – attain their irony. He was always a “team player” – but for HIS team.

Though the movie retains its class by incorporating latest NASA technology and not explaining its jargon in childish asides, even Eastwood had to bow to the asinine Hollywood tradition of sound in space due to dumbed-down audiences feeling cheated if they don’t hear gargantuan metal constructs creaking and clanking in a vacuum.

To accomplish the mission, the acme of Heroism is attained – Hawk’s self-sacrifice. In a grandiose scene that you’d never expect could be from an Eastwood movie, Hawk climbs aboard a jerry-rigged missile-transport, to bronco it to the Moon; he is their Icarus, who never makes it home alive.

In a poignant final sequence, Eastwood’s pullback technique is reversed, as Sinatra’s Fly Me To The Moon accompanies a camera zoom to the Moon surface, to an outcrop of rock, behind which Hawk has spent his final living minutes facing Earth. After 40 years dreaming of landing on the moon, however belatedly and tragically, this American Hero finally got his wish.

A good-natured dig at critics who accuse Eastwood of being “too old” for an action star, SPACE COWBOYS used John Glenn’s trip back into orbit (in 1998) as impetus to plant this generation’s greatest cowboy back in the saddle, to once more define the Clint Eastwood Movie idiom: that even if they say it can’t be done – a Hero will find a way.