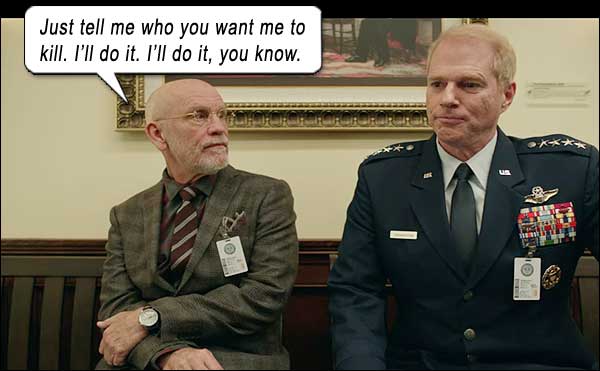 If the comedy isn’t there – Force it.

There was no show, there was no idea; it was really based on nothing, except a name that made everybody laugh.
— Steve Carell.

Created by Steve Carell and Greg Daniels specifically to rag on the moron american president’s wayward musing on creating a “sixth branch of the armed forces” to defend space, SPACE FORCE does more harm than any other unfunny show on TV today, because it glorifies ignorance. Because it glorifies one particular man’s ignorance – that man who holds the lives of 330 million Americans in his hands, if not the futures of 7 billion Earthlings, with the nuclear codes at his reprehensible fingertips.

And the show’s target audience won’t even get the gag.

The dumbo president of the United States and his braindead supporters, whom this show is satirizing, are too oblivious to comprehend they are being made fun of, and it will be regarded by them as vindication that A SPACE FORCE IS VALID. Because any publicity is good publicity. And see? – our fantastic idea is on TV – it MUST be good!

The series has distilled the premise of SPACE FORCE to utmost simplicity: get “boots on the Moon.” Which translates to: Get a military strike force on the Moon, because China is already there, and we’re going to be as juvenile as possible in fighting for that territory which has no known beneficial resources, and no profit incentive. Because America.

Headed by the incompetent General Mark Naird (Carell), the series follows his daily tribulations in getting the agency up and running smoothly while butting heads with his superiors and his science advisor Adrian Mallory (John Malkovich).

Dumbo Donald is never seen and his name is never mentioned – the bitchbaby is referred to as POTUS, and that moniker is mentioned frequently. The branch itself is hastily put together based on the mundane “space force” speculation the real life POTUS made in mid-2018, and its existence is regarded as a joke by the other branch generals (Patrick Warburton, Noah Emmerich, Jane Lynch). (Note: Dumbo Donald is SUCH a lazy conman that the new U.S. Space Force – which was “founded” in December 2019 – is actually a renamed version of the Air Force Space Command founded in 1982 by Iran-Contra traitor Ronald Reagan. So the baseline premise of this show – everyone running around like headless chooks in a “new” department – is bullshit. All the personnel should simply be doing the same non-sequitur jobs they’ve been doing since Reagan gutlessly designated an armed forces branch for “space warfare.” In essence, Dumbo just RENAMED as existing department – just so it could be called “his” creation. It’s the same thing he’s done with the U.S-Mexico border wall. It’s already there, but Dumbo wants to pretend like HE built it, so repeats the lie enough times until it’s truth to 36% of dumbo Americans.)

Naird is fashioned on Michael Scott from the American unfunny version of THE OFFICE. He’s an ignorant blowhard that denigrates intelligence and thinks he’s the smartest person in the room even though he is totally unqualified to do his job. Sound familiar?

Steve Carell is trying way too hard to Be Funny. Shouting, making faces, forcibly trying to squeeze gags from a script where no gags can be squeezed, choking past the point of constipation to deliver deliver deliver on a script that gives him nothing to deliver. Though they keep his character boneheaded for the most part, there are small lapses where they afford him lucidity and the occasional ‘Murrican speech. Because let’s face it, to create a character as starkly ignorant and evil and un-American as the actual Dumbo Donald wouldn’t hold many fans (except that calcified 36% of asshats who support him, through pussy-grabbing to murder).

Steve Carell ponders whether any man needs this many phallic symbols.

Lisa Kudrow is Naird’s wife; she seems dissatisfied in their marriage – unless that’s her usual inadequate acting performance – and halfway through the episode she is suddenly being visited in prison by Naird. Couldn’t be bothered to find out why (too painful after watching three drab episodes and clicking through a few others to verify the whole enterprise is unpalatable).

Malkovich’s casting is trying to draw in people like myself, who will put eyes on this maniac no matter what dung he’s stepped in. Grand performance. Wrong dung.

Lackluster productions like these always make me sorry for the people who DO pull good performances: Two standouts are Jimmy O. Yang as Dr. Chan and Tawny Newsome as pilot Angela Ali (although by Episode 7, the writers turn her into a shrike for awhile, to bud a romance between her and Chan).

Carter Burwell (BEING JOHN MALKOVICH) composes, far below his abilities. Most Burwell-scored movies, I pick up on his evocative style and recognize his rapturous intangibility before I’ve seen the credits. But this music, it’s not cinematic or soul-stirring in the least. I noticed nothing. We all want to work on projects we believe in, but sometimes, we just need the work.

The first outro title card: “In Memory of Fred Willard.” Coincidentally, Willard was in a low-budget comedy called SPACE FORCE in 1978. From low budget to lowbrow, Willard cameos as Naird’s dad in three episodes (Eps 1, 2 and 7) and injects some actual laughs into the dire proceedings. His hands badly shaking, his mind still a comedy funhouse, it’s tragic that his swansong had to be this excrement.

Satire has to stretch farther than the reality it is satirizing, but when your TV show cannot come within morbidly obese distance of the pointlessness, ignorance and non-sequitur idiocy of the real life Dumbo Donald administration, your satire has failed. The confusion and disorganization exhibited by Naird’s Space Force team is nowhere near the confusion and disorganization exhibited by the real life white house, who couldn’t even find the light switches when they took over the joint. When a fictional TV show cannot match the stratospheric levels of dumbass, felony and treason of the reality, it reveals what a hot mess the actual 2020 american government truly is. And that just makes us madder.

Maybe 10 years ago, SPACE FORCE might have been able to make these jokes (if some less malicious idiot had blurted it at a press conference – cough – W) but in the idiocracy of today, it’s a terrifying documentary.

The close-minded, incurious, ignorant Naird, risen to the rank of 4-star general through brown-nosing the administration, wants to launch their first satellite against all his technicians’ advice; he personifies the piece of dogshit they are lampooning by NEVER LISTENING TO SCIENTISTS and making decisions NEVER based on empirical evidence, but on benefitting his political position – and we are meant to find him funny when there is a sitting U.S. president who fires federal scientists who do not promulgate his sociopathic ramblings as truth?

Noah Emmerich is General Kick Grabaston. Is that really funny when the grab-ass president of the United States has sexually molested over 49 women and is not in jail for one of those rapes and assaults?

Ben Schwartz is the Space Force publicist, who tells Naird, “I never get involved in whether people are telling the truth or lying. I mean, those words carry very little meaning to me.” Again, is that really a joke when the real life president is telling the citizens of his country, who are waiting to hear factual methods on how to stay alive during a pandemic, to inject disinfectant to cure a virus?

The nods to the Dumbo Donald admin are constant, as in Episode 7, when entrepreneur Edison Jaymes (Kaitlyn Olson) sells Space Force her “Skinny Fuel” which is supposedly more efficient than regular rocket fuel, yet she won’t reveal the science behind it. How does she sell it? She sycophants herself to Naird to get on his good side, and he blindly buys the fuel and loads his rocket with it – because she praised him. (Sound familiar?) Here’s the clincher: Naird discovers that it will blow up his rocket (meaning: egg on his face – for being scammed with the fuel and his rocket blowing up), so surreptitiously replaces the Skinny Fuel with regular fuel. The launch is a success, and Naird whispers to Edison the switch was made “off the books.” Which means for all intents and purposes, her fuel worked. When in fact, it is dangerous and could get people killed. This means she will tout this launch on her resume to other buyers as evidence that her fuel is safe. This convoluted matrix of harm is not just in this fiction – it is out here in the world. 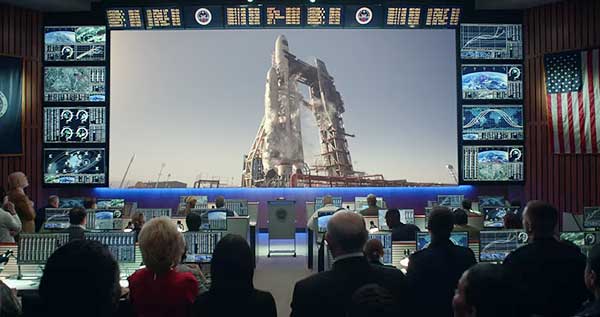 In a world where the dumbo president lies to reporters that he is taking hydroxychloroquine – a malaria drug – to cure a virus that he doesn’t have, then tells reporters a week later that his regimen of taking it is over, because he doesn’t want to continue the lie – this is the world in which this scam rocket fuel episode is being aired. You really find this funny, Steve?

This is not smart satire. This is just dumb enough that Dumbo Donald and his cronies and supporters will use it as evidence that scientists are full of shit, and that going with your gut is RIGHT. We can’t place the blame anywhere except at the feet of Carell and Daniels as writers, producers and star.

Carell and Daniels are not even writing jokes by Episode 2, just transcribing actual dialogue from meetings that NASA and other space agencies must have had with Dumbo Donald. When China sabotages the launched satellite, amongst Mallory’s team of scientists gathered to brainstorm solutions, there’s Naird shouting out imbecilic fantasies in his unmitigated ignorance and insisting his baby ideas be taken seriously over the technical solutions of the scientists. Naird is actually asked by Mallory: “Why do you distrust scientists?” After his word-salad answer, someone points out his discrepancies, and he simply snouts them down – “SHUT UP!” Funny? No. Reality? Yes.

The final scene of Episode 2 at last skews the character away from the orange sphincter, as Naird, who has been awake 24 hours, goes home to find his daughter struggling with trig homework and stays up to help her, against her pleas that he get some rest. That helping hand is something Dumbo Donald would never offer—hang on! Naird’s daughter is in her late teens, slim and hot, so in the spirit of Dumbo Donald, Naird is actually cultivating that daughter’s panties—

To everyone who just groaned (Awww, that’s gone too far!) *I* am simply reporting what Dumbo Donald ACTUALLY DOES. *I* wasn’t the pervert who said “I would date my daughter if she wasn’t my daughter.” Who said that again? I wasn’t the pedophile who held my daughter in a photo when she was 15 like I was embracing a concubine. I wasn’t the lecher who touched my daughter’s hips in public like I’m used to touching them as I take her roughly from behind. Which adulterous, incestuous, unindicted co-conspirator to obstruction of justice did all those things again?

The ten Season 1 episodes of SPACE FORCE are Low Earth Orbit drudgery. If Dumbo wins a second term, this show will unfortunately be picked up for further Seasons, as the filmmakers think they are sending a positive message about the negativity of the Dumbo administration. All we can hope for is that the elections are fixed for the Other Guy this time round, and that any further SPACE FORCE plans will burn up on the launch pad.

I loathe watching and hearing this piece of dogshit as much as you do, but this is where “space force” was first mentioned; something that pooped into this juvenile’s head while he was having his adult diaper changed, and then, because he happens to be president, given the opportunity to publicly muse on his imbecilic passing notion that has no ties to reality.