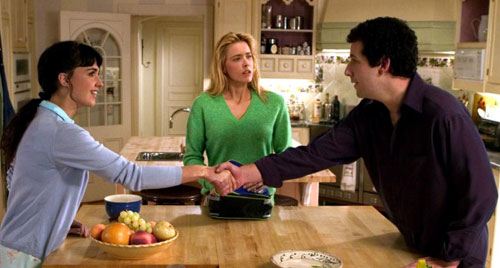 Opera Man getting his Spanglish on!

In a stunning demonstration of “playing against type,” Boy Sandler actually portrays a Real Human in SPANGLISH – a well-rounded, successful husband and father, as far removed from any of his other roles as Rob Schneider is from comedy. 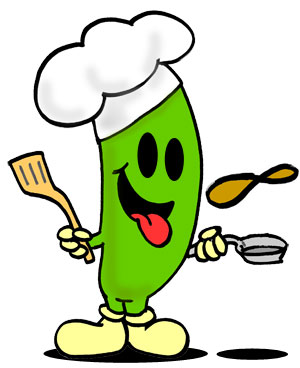 Playing noted chef John Clasky, replete with neurotically-fit bombshell spouse (Téa Leoni, sensationally vivacious as Deb, yet marred psychologically), frumpy daughter (played with good cheer by Sarah Steele), live-in mother-in-law (Cloris Leachman, in a heartfelt performance), son and pooch to boot, Sandler is here, in essence, a Normal Human Being, as opposed to the fringe pariahs he has bulked his career with.

Into this family unit comes a Spanish housekeeper, Flor (voluptuous Paz Vega), who develops a hesitant, platonic intimacy with John, not least due to his wife’s unthinking behavior and neurotic episodes indirectly nudging them together.

Flor’s daughter enters the equation when the family moves to a Malibu beach house for the summer. In her first feature film, 12-year-old Shelbie Bruce (as Cristina) floors us with a right-outa-the-gate performance that could school a few adults on acting subtleties. In a breakout scene, she translates English and Spanish between Flor and John, taking on the attitudes of each speaker in her attempts to convey the import of their words faithfully. Not only did this scene highlight Shelbie’s bilingual talents and bravura instincts, it was also the deal-maker for Sandler, where we finally admit to his controlled performance as being not just a fluke or performed by a stunt double with acting training.

As unlikely as it may sound, this is a romantic film without a payoff – itself a species of pariah in the Hollywood mainstream – yet its multi-layered and nuanced chops (by Sandler, Leoni and Vega, with a subplot involving a slick Thomas Haden Church) allows its non-adulterous climax to play itself out maturely and believably.

Now let’s put this in perspective: in this film, Sandler is still no Gary Oldman or Harrison Ford, but has wisely opted to eschew that nerve-jangling character that has heartily nauseated us over the years, with the voice akin to nails on a blackboard and the sensibility of a retarded marmoset, to play it courageously straight. (Much like PUNCH-DRUNK LOVE, a previous film where Sandler almost took his character to normalcy, but retained a shade of what seemed like autism.)

A typical James L Brooks vehicle, which seems to neither move forward nor stagnate, I applaud his belief in and casting of Sandler, in this role which could have effortlessly been filled by a Keaton, a Bridges or a Stiller. I must admit that being “pleasantly stunned” by Adam Sandler – as a romantic leading man, no less – is an intriguing emotion, alien to my being. After this review, I’ll need a strong drink and a smack on the botty to bring me to my senses.

After spending a lifetime egregiously miscast in movies that have never called for him to extend his range farther than “imbecile” – as loathe as I am to admit this without electrodes attached to my well-toned pecs – Adam Sandler has grown up!