Blair and Bubba: A Love Story.

All political friendship is strategic and conditional.
— Tony Blair advisor. 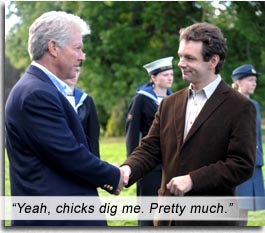 A touching bromance between two heads of state.

The Special Relationship refers to that unspoken sexual tension between America and any other country that needs to suckle at her black milk teat so she won’t crush them like Hulk crushes puny humans.

THE SPECIAL RELATIONSHIP here alludes to the maternal suckling that President Bill Clinton offered Prime Minister Tony Blair when he took office, acting as advisor, mentor, and dirty uncle who exposed himself.

Dennis Quaid is uncanny as Clinton, getting the voice, attitude and hair exactly right; Hope Davis is superb as Hillary, down to the witch’s cackle. And Michael Sheen is Tony Blair once again on film. (I was unaware that SPECIAL RELATIONSHIP is in fact the third in writer Peter Morgan’s own “special relationship” with Tony Blair as his subject, the first being THE DEAL (2003) then THE QUEEN (2006), all starring Sheen as Blair. Who woulda thought Tony Blair warranted a trilogy?!)

RELATIONSHIP is a whirlwind fly-on-the-wall drama, a behind-the-scenes snapshot of a few moments in political history; as Clinton came into his second term as president, Blair was being elected Prime Minister. Movie follows two main events in their interaction – Bubba’s Lewinsky indiscretion and how Blair stood by him, and Bubba’s Kosovo decisions and how Blair stood over him.

All these historical figures are still alive so it is with some speculation we listen to their bedroom chatter, prying into two couples talking about each other the way couples do. While Clinton relaxes on a bed popping chocolates into his mouth, he remarks to Hillary about how handsome Blair is; while Blair’s wife Cherie (Helen McCrory) is amused at the U.S. press calling Bill and Hillary “Billary.” (Would Blair and Bubba then be “Blubba”?)

And what exactly did Bill tell Hillary about Monica? We see him confess like your average contrite philanderer to his frowning, icy wife – yet I very much doubt a president would prostrate himself so emotionally without also an eye towards the indomitable power he wields on the world stage and his wife’s conduit to that power were she to keep her mouth shut.

On Lewinsky, Blair remarks, “What he does is a private matter and it doesn’t affect his ability to govern,” publicly standing shoulder to shoulder with Clinton. Supporting a president in return for that president’s friendship offers an insight into what might have made Blair W’s lapdog. We now see that if one were unaware of Bush’s flagrant stupidity, one would adopt the same supportive stance of the American presidency. However, in hindsight, Blair obviously bet on the wrong horse with Bush Jr, and irrevocably sullied his own legacy.

SPECIAL RELATIONSHIP keeps the kid gloves on – a little apologist, a little leftist rewriting of history, a little extra sheen on The Sheen; it is, after all, a towering tribute to Tony. (And we thought only superheroes and hobbits warranted trilogies!) Clinton looks like a man who PROBABLY had an affair, and Blair looks dignified and astute in standing up to Clinton against pussyfooting in Kosovo.

In 1999, Blair wanted ground troops in Kosovo to augment NATO air strikes against the ethnic cleansing being prosecuted by Yugoslav president Milosevic. Clinton disagreed. Much pouting ensues. Until Blair gives a fiery speech worthy of a King or a Kennedy, “…Let no one doubt again the moral justification for invading another country for humanitarian ends!” making 70% of Americans at the time poll that they wouldn’t mind Blair as president. And we clearly see the signposts leading to why Blair supported Idiot Bush’s Iraq.

Newspaper article: “Listening to the press conference one could not help but note how much Clinton could have learned from his Churchillian comrade.”

In these men’s storied lives, only so much can be crammed into two hours screentime, so before we know it, Blair and Clinton are watching W steal the 2000 election from Al Gore on TV. Blair believed, “I would be the senior partner now, Bush would be the junior.” And Clinton offers advice, “These guys play rough. Their administration was born in controversy, national shame and illegality – and it’s my bet that’s the way they’ll go out.” It’s a great line, but was Bill really that prescient?

Blair opined he would much rather be in the big room with the people making the decisions than left out. Well, turns out he WAS allowed into the Bush regime’s fold by President Dick Cheney – but was relegated to scapegoat and red-headed child.

Movie ends with real footage of new president George W. Bush and Tony Blair publicly affirming the relationship between their two countries. And I think this ending warrants another beginning – now we definitely require a Part IV to Peter Morgan’s insightful series: “Blair and Bush – The Bitchboy Years.” Where once he showed such courage against the establishment, poor Blair was unwittingly caught in the cogs of unbridled stupidity and became the establishment’s whipping boy, but if anyone can do it, Morgan would be the researcher to mitigate Blair’s bungled alliance during Bush’s acid reign.

In relationships – even special ones – everyone deserves a second chance at bromance.