It’s ALIEN with a spectacular pair of natural knockers. 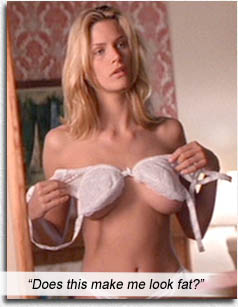 Designed by H.R. Giger – the alien species, not the knockers – a half-human, half-alien life form called Sil (Natasha Henstridge in her human form) escapes from a SETI facility and goes on a rampage fucking everyone. In the Biblical sense. And then fucking them in the Hollywood sense.

Spreading her alien seed, doing what every species on Earth has been designed to do by genetic engineering since life began, somehow she is regarded as doing something wrong. Only because she is not of the human species.

And it only confuses the issue when non-humans have such great knockers.

Specialists are called in to hunt down the alien: Michael Madsen as the Tough Guy, Alfred Molina as The Dork, Marg Helgenberger as The Hot Scientist and Forest Whitaker as The Empath, all led by Ben Kingsley The Brain.

SPECIES hangs our credibility by a thread by initially mating human DNA with alien material to spawn Sil, but we can live with that in a haze of scientific jargon and mungus ta-tas; that thread is cut when The Empath is introduced, tracking mud all over the science and jerking all over the jargon. Whitaker is only here so that the alien hunters can glean clues to Sil’s movements without hard evidence and stay hot on her hot tail. That spoils an otherwise good story centered around the most basic tenet of natural selection.

The message at the core of SPECIES is that every living thing’s purpose is to mate; continuance for the genetic code. It’s what Marg Helgenberger aches to do with Michael Madsen all movie.

We’ve grown so inured to that mating message with all our displacement and duplicity and political correctness that when Sil asks a captive woman why she is here on Earth, the woman tearfully laments, “I don’t know!” And people don’t! They think they are here to make money, to worship false gods, to get married, work a job, buy a house, blah blah…

Writer Dennis Feldman got it right – the purpose of life is to propagate more life. And the organism in this story trying to copulate copiously is designed correctly as well – she is the most alluring thing on two gams. Genetic engineering at its best. Henstridge is so strikingly beautiful, there is nothing else onscreen when she glides past. Helgenberger is a tasty specimen herself, but in this movie, Henstridge is in a league of her own.

The message gets a little lost when the person on the team who eventually has mind-blowing, unprotected sex with Sil is The Dork. Who promptly explodes with alien bodybursting.

There’s the other message: the more beautiful the chick, the more painful the disease.