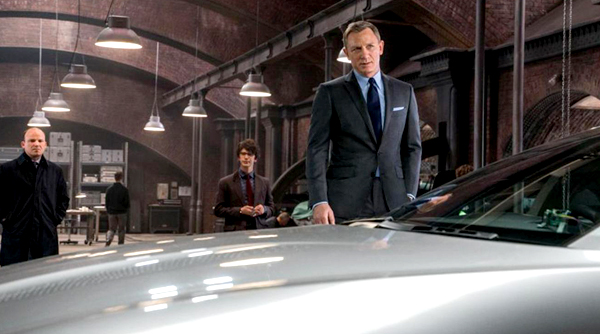 “Have you got anything under 4 billion dollars that I can park around humans?”

Same old Bond! What did you ex-spectre?

Daniel Craig, in his fourth outing as James Bond, looks old and makes me tired. French flame-hair Léa Seydoux is Madeleine Swann, resident Bond Girl (which means she looks as pretty as Jon Bon Jovi, yet is somehow a doctor). And in what is initially an ominous role – that devolves to just another villain telling Bond his plan before putting him in a trap that allows him to escape – the brilliant Christoph Waltz as the rebooted Ernst Stavro Blofeld (most memorably played by Donald Pleasance in YOU ONLY LIVE TWICE). Blofeld starts as a shadow, with the power to make men do his bidding with a whisper – and ends as Dr. Evil.

Waltz’s intrinsic sinister demeanor is felt here only when he is in darkness, and is immediately lost once he reveals himself and starts egotistically explaining his plot like any Goldfinger, Largo or Drax. I was very disappointed not to be terrified by this man, in a role that should be the most terrifying of his career – someone behind pre-meditated world-spanning crimes, not just a Jew Hunter; I mean, he was more sinister in HORRIBLE BOSSES 2.

And his organization Spectre is misused here as well. Producer Kevin McClory sued EON Productions in 1961 (owners of the Bond franchise, headed by Albert Broccoli at the time), prohibiting their use of SPECTRE and Blofeld, both his creations. (That’s how we ended up with Roger Moore dropping a fake Blofeld down a chimney shaft in FOR YOUR EYES ONLY and the rejoinder to that juvenile gesture, the Connery film NEVER SAY NEVER AGAIN, produced by McClory.) That’s why we never saw SPECTRE or Blofeld appear in any post-Connery film.

Well, McClory died in 2006, and in 2013, the McClory estate settled with EON, who were granted the copyrights to use the properties. So what does EON do in this film? Not only do they re-insert Blofeld back into Bond canon, they make Blofeld claim to be responsible for EVERYTHING that has happened to Bond over the last four decades. “I am the author of all your pain.” Jesus, talk about “grasping”! Or “retconning,” as the cool kids call it. 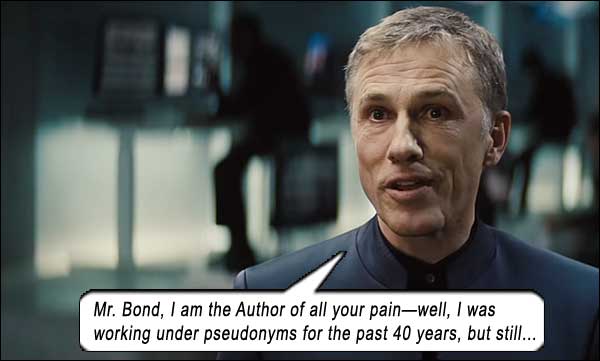 Bit childish, dontcha think? Claiming this person or org has been behind the plots of the old episodes is THE most pointless plot device in a series chock full of pointless plot devices. Is producer Barbara Broccoli, like some kind of megalomaniac from a Bond tale, just seeking revenge for her father? Lemme tell you, Babs, newer Bond fans don’t care, and older Bond fans will just roll our eyes.

Also, the acronym (SPecial Executive for Counter-intelligence, Terrorism, Revenge and Extortion) is apparently discarded, and “reimagined” as Spectre. So am I meant to think about Spectre whenever I rewatch Scaramanga or Kristatos or Elliott Carver? Because I WON’T. And guess what? Nothing changes. Unless you actually go in like George Lucas and change dialogue and add banthas in the background. Which I’m sure you snide, petulant, grasping assholes will do eventually.

The James Bond series of films has always been a little flamboyant, due to the technology being AHEAD of its time – pens that shot explosives, watches with telex communication, rings with built-in cameras, cars that turned into submarines – but in 2015’s SPECTRE, the technology is at the level of 2015 technology! Nothing is surprising: there’s a gun with laser sights that shoots explosives, a watch that explodes, a tracking device injected into the blood, a dentist’s chair with remote-controlled drills, a computer that shows road maps, a sports car that spouts fire at its pursuer… yawn… Wake me when they use something that can tell time not just locally, but around the world, as well as predict the weather, show traffic accidents, identify songs, has a guitar tuner, an altitude meter, a compass, a flashlight, a dictaphone, an appointment calendar, email, internet, constellation map, camera, video games, metronome, stopwatch… or they can just USE MY PHONE.

How do we get excited over a spy who’s using technology that’s less impressive than what’s keeping my balls irradiated?

Opening sequence is a seemingly unbroken take that follows Bond through the Day Of The Dead festival in Mexico City, up into a hotel room, and out onto rooftops, where he eventually perches with a machine gun scope to assassinate someone in the next hotel. The logistics to set up the festival crowd alone is mind-boggling. It is technically NOT an unbroken take, but the transitions are so seamless it is obviously meant to be. It is by far the best scene in the movie.

Then — a lung-busting explosion, a building falls, a foot chase, a fight in a swerving helicopter above a crowded square… a ring with a seven-armed octopus… 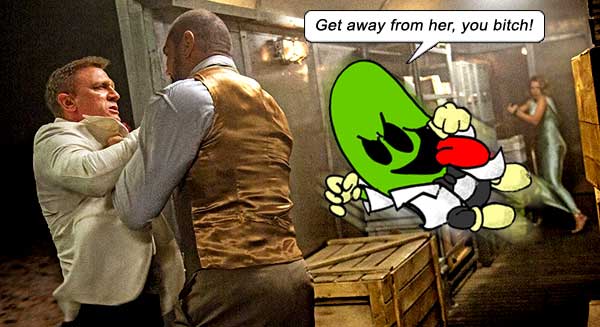 While Bond is suspended by M (a stalwart Ralph Fiennes) for chasing an unknown organization without authorization, a new MI6 boss Max Denbigh (a smarmy Andrew Scott) is looking to scrap “the prehistoric double-oh program” altogether, thereby making Bond redundant. That old device of robbing the hero of his very essence (IRON MAN 3, MISSION IMPOSSIBLE: ROGUE NATION, THOR, hell, even this movie’s predecessor SKYFALL) to make his struggle back even more heroic.

Dave Bautista is this movie’s Jaws, a towering killer of few words, sent by Spectre to kill Bond. Ben Whishaw is once again weapons expert Q (and computer whiz too), and Naomie Harris is once again Moneypenny, both of whom help Bond stay on the track of Spectre despite his own spy agency disavowing him. They share many exciting scenes of talking and looking at computer screens showing source code.

As with all the modern Bond films, it’s a classy production, with lush soundtrack by Thomas Newman (SKYFALL, THE IRON LADY, WALL-E), screenplayed by John Logan, Neal Purvis, Robert Wade and Jez Butterworth (the first three having worked on all Craig’s Bond films), and directed by SKYFALL’s Sam Mendes, so there is definitely a tone of continuity. Although that tone might not be the best direction for Bond: everything here is dire, dark, depressing; Bond does not retain the lightness of his character from previous movies and incarnations; no quips or wistfulness. Roger Moore was a looong time ago… Are Bond’s filmmakers following the example of Nolan’s DARK KNIGHT series too well, by making everything that was once flamboyant grounded in stultifying reality? 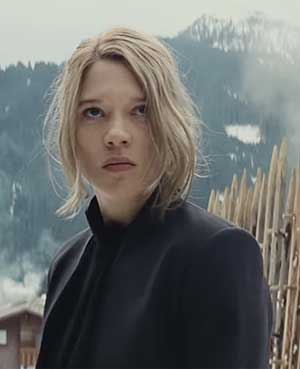 Bond and Swann travel to exotic locations, escape inescapable situations and feel the urge to plonk after every life-and-death battle. Best audacious chase scene is Bond smugly pursuing a Jeep in the snow – in a plane being demolished as it slides down the ice, ending up tail-less, wingless and engine-less – and still catching his quarry!

There are many nods to the series in general: “shaken not stirred,” the Aston Martin, the origin of Blofeld’s scar, Judi Dench cameo, Bond’s carelessness with Q’s toys, and the fact that Bond plonks an arbitrary buxom beauty (Monica Bellucci) for the sake of a password. And a sort of turnaround on a famous quote: Bond says, “I came here to kill you!” Reply: “And I thought you came here to die.” (In the vein of GOLDFINGER‘s, “No Mr. Bond, I expect you to die!”)

When the connectivity with all the recent Bond films and villains is revealed, this news does not seem compelling, because it seems like Bond is just waiting to hand in his resignation for the sake of Bon Jovi’s panty. It’s not even Daniel Craig’s real life comments about rather slashing his wrists than doing another Bond film; the plot itself steers him in that direction like a luxury sportscar.

Pierce Brosnan (the 5th Bond) is also not impressed with this 24th Bond film, blaming it on the point I made about the technology, putting it another way, “Is this Bond or Bourne?” meaning the movie is not separating itself anymore from the mill of hi-tech actioners, whereas once – even during Brosnan’s most recent era – Bond films were an audacious hyper-reality.

If Daniel Craig decides to return for another one, tell Barbara Broccoli she can borrow my smartphone…