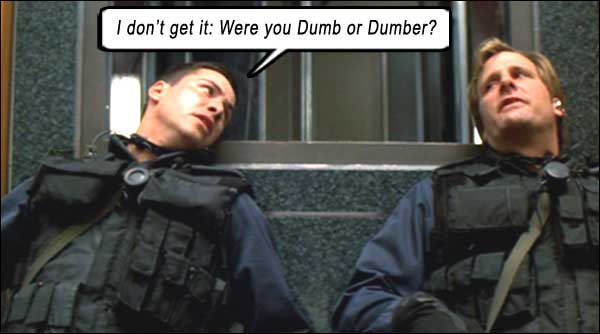 Play the drinking game to this movie, for every time you hear the words, “Hang on!” You’ll end up drunker than Lindsey Lohan.

SPEED – an action movie that delivers a thrill a minute, almost as often as you have to take a drink – arguably put Sandra Bullock, Keanu Reeves and director Jan de Bont on the blockbuster map.

Though this movie is best known for its extended bus sequence, it is composed of three vignettes – elevator (vertical speed), bus (variable speed) and train (accelerative speed).

Segment One: People trapped in elevator – two elevator repair men arrive in a gratuitous flying police car. They are Jack (Keanu) and Harry (Jeff Daniels). One of them is the Brain, one of them the Overactor. I’ll let you decide which. Elevator blown up by mad bomber, Howard Payne (Dennis Hopper, doing his Dennis Hopper). Take breath. Onto next segment.

Apparently, driving a bus is so easy a caveman can do it, as a Downtown Los Angeles bus is piloted by Nearderthal-browed Sam (Hawthorne James), transporting a bunch of extras for a Bennetton ad. Bus boarded by gregarious Annie (Sandra Bullock, back when she was just a cute little comer with great legs, not the big-headed icon she would become). 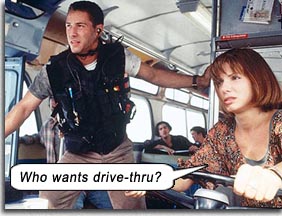 Writer Graham Yost seems to have gotten every ethnicity and job description on that bus, The Construction Worker, The Tourist, The Old Lady, The Asian, The Paka Lady, The Policeman, The Token Blacks, The Guy From FERRIS BUELLER, The White Preppy, The 1930s Lady, but I think he forgot the Indian Chief.

Mad Bomber gives ultimatum to Jack: “There’s a bomb on a bus. Once the bus reaches 50 miles an hour, the bomb is armed. If it drops below 50, it blows up. What do you do?”

Well, considering it’s 9:00 a.m. in Los Angeles peak hour traffic, on the 10 freeway near Santa Monica, I’d start placing bets that the bus couldn’t possibly get up to 50 miles an hour in the first place. Then I’d have breakfast.

Instead, Keanu clambers onboard the moving bus to try to smoosh up against Sandy’s legs as much as possible. Luckily, one of the stereotypes has brought a gun – to shoot the caveman bus driver – precipitating Sandy’s Legs having to take the wheel and drive herself into the hearts of America.

Joe Morton is the bomb squad chief whose stage directions from de Bont were, “Okay, see these lines of script? Now shout them into a walkie-talkie.”

Jack assesses the bomb with technical jargon: “There’s enough C4 on this thing to put a hole in the world!” Is that a lot?

We could complain about the unreality of taking hard right turns at 50 mph, or the physics impossibility of a laden bus jumping a freeway chasm without an approach ramp, or the fact that Keanu couldn’t possibly consider his performance “acting” – but everyone’s just having way too much fun.

By the time we are onto Segment Three – the runaway train – our adrenalin is kinda tapped out and it seems superfluous. But Keanu gets to smoosh up against Sandy again, with an added bonus – she’s handcuffed to a vertical bar in the carriage.