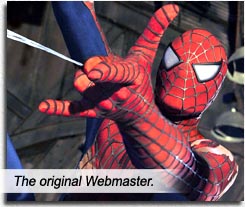 Based loosely on the comicbook episode Spider-man No More, plot finds Dr. Otto Octavius (Alfred Molina, in strapping scenery-chewing mien) “tampering in God’s domain” (as they used to say in 50s B-Movies) trying to subvert the Second Law of Thermodynamics (as they should be saying now, if it weren’t for science riding backseat to Jamaican “psychics” and George W. Bush’s mongoloid church administration) to get more energy out of a system than he put into it. Which can’t be done. If you know your science. Which Octavius apparently does not. Thus, amidst Pretty Orange Explosions, everything gets pear-shaped, causing four steel-belted, evil arms to fuse to Octavius’s inner Manson, spawning the fearsome “Doctor Octopus,” who becomes a supervillain. Natchelly.

And Spidey must save the day.

But Spider-man/Peter Parker (Tobey Maguire), perpetually mooning over Mary-Jane (Kirsten Dunst’s Breasts), experiences a psychosomatic loss of powers and renounces his web-slinging in favor of the geek life. Thus – Spider-man No More.

It is only when Doc Ock threatens his breasty bimbo that he realizes he must reconcile his inner freak with his outer geek.

Overall, SPIDER-MAN 2 sells its product, but falls down in niggly details: Peter loses his job as a pizza delivery guy because he couldn’t make good on a “29 Minute Guarantee” – but what kind of insane, coke-addled pizza parlor would make that kind of guarantee over a 42-block radius in the heart of New York City?; Doc Ock robs banks to buy the components for his evil machine – but why not grab a supervillain nut (whilst cutting out the middle man) and simply steal  the parts?

Visual clichés to grind your teeth by: Peter at a high-class soiree, having every last hors d’oeuvre picked out from under him (it worked for Peter Sellers); bride running through streets in slomo (it worked for Julia Roberts); shot of Spider-man costume hanging decoratively out of a trashcan (worked as comicbook cover – lame as live action); there is even a grandiose “Noooooo!” scene with Doc Ock – this movie has everything!

And can we stop with the screaming? That convention of B-Movie Screaming Damsel is now officially getting on my nerves. From hospital nurses to hot chicks, from Mary-Jane to Aunt May (Rosemary Harris) – every woman in SPIDER-MAN 2 screams exactly the same way; whether a flat-bellied model or Peter’s septuagenarian aunt, they all somehow capture that identical frequency of high-pitched, nerve-fraying, cochlear irritation. And frankly, I’m sick of it! Who screams that way in real life? If I were to become a superhero by some freakish radioactive ferret-bite to the buttocks, and I had to save some supermodel damsel in distress, I’d insist she cease that confounded insensate shrieking if she valued her taut, Body-by-Jake ass.

And Spider-man takes his mask off too much. Why? So we can see him emote. When his powers fail, it is more effective to pull off the mask and look dumbfounded than let the mask tilt its head and say, “Huh?” And how much more dramatic to stop a train, mask-less, straining with neck-bulging effort, rather than letting his round-headed alter-ego smoothly halt it?

The thought and detail that went into the astounding battle scene between Doc Ock and Spidey atop the speeding train rivals that of any movie ever made – so many minute details all working together to create a breath-stopping experience – and plausible, in that world where these super beings live. As just one example of those thousands of details: when Spider-man smashes out through the train windows sideways, he shoots his web with both hands back at the body of the train and pulls himself back onto the side of the moving train before we can even think of how he was going to save himself. Brilliant! Times 1000. 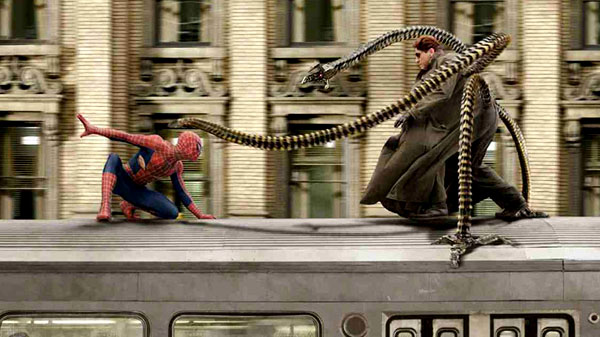 Too many arms on the dance floor…

Unlike the BATMAN movies, we always see Spider-man clearly – especially in a cool elevator scene where he rides with QUEER AS FOLK’s Hal Sparks, a real life comics aficionado in a riotous cameo.

Danny Elfman‘s Spider-man Theme – that horn line, which always makes me stifle a tear – is epic in its sweeping poignancy, tastefully regal, a superhero’s lament. And the web-swinging tears the breath from your lungs with its breakneck daredevilry.

Peter reveals his identity to Mary-Jane in the most auspicious of heroic deeds – he holds up a building that is about to topple on her. Isn’t it every schoolboy’s fantasy to meet a girl that way?

And I love that his head is the exact, correct roundness.