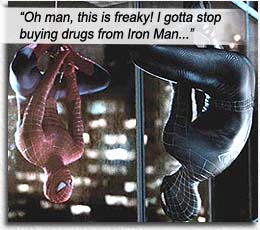 What an adventure! SPIDER-MAN 3 is a swingin’ soiree; a chill-er thriller ladykiller that tops both its previous incarnations with smooth-headed, web-spangling adventure and vibrant, flesh-colored emotion. Heroes tainted by evil, villains infused with poignancy, lovers circling in triangles and Topher Grace as the meanest metrosexual this side of AMERICAN IDOL.

Writer-director Sam Raimi bats it out of the super stadium spinning this arachno-tastic tale.

Spiderman is now to New York what Superman was to Metropolis – an actual “hero,” despite J. Jonah Jameson’s (J.K. Simmons) crusade to discredit him through The Daily Bugle. And self-absorbed Peter Parker aka Spiderman (Tobey Maguire) lets his hubris blind him to his flame-haired squeeze, Mary Jane Watson (Kirsten Dunst) having lost her baby fat and consequently her unconditional support of his heroic antics. Whereas at the conclusion of SPIDER-MAN 2 (2004) she exhorted him, “Go get ’em, tiger!” reality has now settled like a gargoyle on her syrup-flavored romantic notions of being hero-worshipped by a hero and, like every woman whose designs to “change a man” don’t pan out (believing erroneously that mere Panty Access is bargaining power enough to surrender his balls unto her purse), restlessly looks further afield for the fantasy eunuch she thought she had found in Peter.

Enter Harry Osborn (James Franco), Mary Jane’s ex and Peter’s best friend. The first love-triangle is set in motion (two guys and one girl), as Mary Jane breaks up with Peter on the HIGHLANDER bridge.

Though I chided Franco’s talent in SPIDER-MAN (2002), SPIDER-MAN 3 forces a re-assessment of his prowess as actor and character – I stand corrected, sir! No longer nutless or translucent, James Franco is the embodiment of nuance! His dual role as Harry Osborn and New Goblin is the most challenging of the film – that of hero’s friend driven to hate, then amnesiac friendship, then friendship pretense masking evil intent, then sincerely offering friendship once more in a compelling Marvel Team-Up situation, ultimately meeting his end by saving Spiderman’s life in the same way that his father, the Green Goblin (Willem Dafoe), tried to take it.

As one villain falls, another rises.

The origin of the Sandman/Flint Marko (an inshape Thomas Haden Church, with his sad Jagger lips and famous green-striped shirt) is epic and heartrending all at once: after good ol’ 1950’s radiation comes to the rescue as Plot Device and irradiates Marko into a sentient sand-being, he finds he cannot grasp his daughter’s pendant without exerting an incredible force of will to cohere his molecules into solidity. The CGI visualization of the distraught Sandman’s sandy complexion is desolation boulevard; the best CG sand effects you will ever see in motion pictures today. He maintains, “I’m not a bad person. I’ve just had bad luck.”

I’ll tell you who has bad luck – Dylan Baker, as one-armed Dr. Curt Connors. According to Spiderman lore, in trying to grow back his arm – through reptilian regeneration biology – Connors becomes The Lizard. Since 2002’s SPIDER-MAN, the Connors character has been mentioned or has traipsed onscreen for cameos – yet every new Spiderman movie sees Mr. Baker in one-armed professor mode, as yet ungreen and unscaled. Is Raimi just teasing US – or HIM?

Spiderman lore is audaciously breached when the film’s writers make Flint Marko the real killer of Peter’s Uncle Ben (as opposed to that doughy guy with the frosted hair who killed Uncle Ben in the 2002 flick), to raise the emotional stakes, giving Peter compelling reason to shake the sand out of The Sandman’s itsy-bisty, teeny-weeny, green-and-bluey striped bikini.

As if this revelation and his breakup and his rent being late aren’t bad enough, Spiderman must face his own inner demons when an alien goop from outer space changes his costume black and his personality to Buddy Love (Jerry Lewis version). (Don’t even ask – there are too many years of comicbook doctrine for this movie to exposit the goopy thing properly). This is the only point where it almost gets irretrievably silly: Peter Parker becomes so outlandishly arrogant he struts the streets like Travolta, with women sniggering at him like he’s, well, Tobey Maguire… (Apparently, this scene was enough to make many viewers dismiss the whole movie and miss its laudatory points. Shame on viewers for their TMZ mentality!)

Thus the second love-triangle coalesces (two girls and one guy), putting a crimp in Mary Jane’s first love-triangle, as Gwen Stacy (Bryce Dallas Howard) oozes on Gangsta Peter, planting an upside-down kiss on Spidey in public, giving Mary Jane license to whine like the spoiled byoch she is. Like all women, Mary Jane wants her man to retain just enough status for other women to be jealous, but not so much status that other women will clamber to land him.

In my review of IN GOOD COMPANY (2004), I opined, “One day Topher Grace will learn that “acting” is not behaving like you’re making one big apology.” That day has come. In his role as unctuous photographer Eddie Brock, Topher flies way past the meridian on apologetic and slams into Jugular Deranged in his transformation into one of the fiercest creatures ever to try biting into Spiderman’s roundish head – Venom.

The greatest stunt that Raimi pulls in this movie is to imbue both heroes and villains with a wrenching poignancy; amongst the creatively spectacular battle sequences, his human protagonists have not been forgotten. In fact, the most touching scenes involve the Sandman, whether he’s tragically seeking forgiveness from his own family or explaining to Peter how he accidentally shot Uncle Ben – look up Sob Story in the dictionary, there’s a picture of this guy. By the time his Oscar moment rolls around and Peter, teary-eyed, absolves him, we are also weeping into our plastic pizzas (well, at least I was).

In a comicbook film which could have easily stereotyped “good” and “evil” characters (considerably shortening the movie for the lowbrow popcorn-guzzlers who consider it too long for no reason other than its length), Raimi and his writers (Ivan Raimi and Alvin Sargent) allow a gamut of shifting emotions and motivations to infuse each character – that is, there is no constricting cliché making anyone one-dimensional for easier comprehension; they exist in a world where their changing circumstances force them into continual re-interpretations of “right” – like our own ambiguously-immoral real world.

Movie is long (140 minutes), but doesn’t flag – except for the actual flag that Spiderman lands directly in front of; an obvious “Go USA” moment that is perfunctorily used in trailers. You want inspiring? Forget the flag – bring Danny Elfman back (music for both previous films); composer Christopher Young sparingly uses Elfman’s grandiose horn line and it is sadly missed.