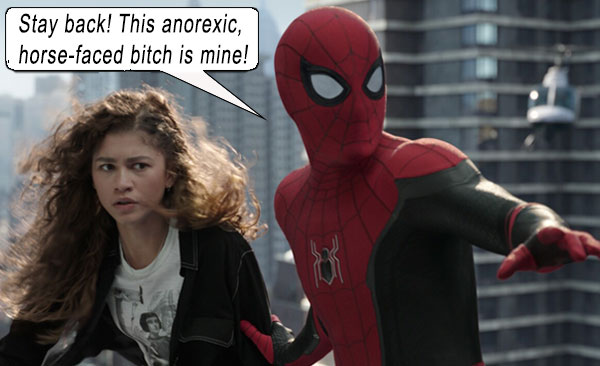 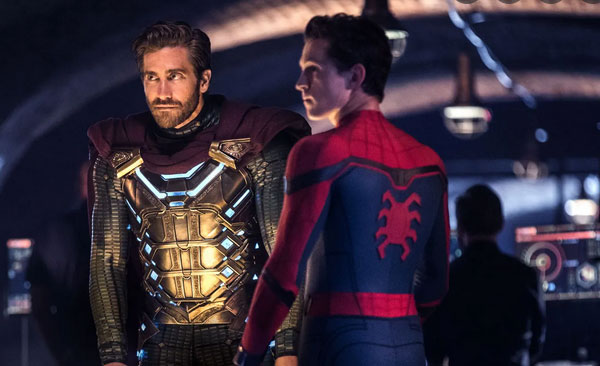 Marvel’s First Law Of Mask-Wearing: Thou shalt not wear a mask if thy Prettiness Scale exceeds 7.

After Tony Stark’s death (in AVENGERS: ENDGAME – c’mon, where you been?), Nick Fury (Samuel L. Jackson) bequeaths Peter Parker/Spider-Man (Tom Holland) the command of all Stark’s tech, via a pair of magic sunglasses. Five minutes later, Parker relinquishes his superhero status to chase after panty (the SUPERMAN II syndrome), and hands over the glasses to interdimensional stranger and all-round responsible chap, Mysterio (Jake Gyllenhaal in mo-cap pajamas). When it is discovered Mysterio is just an efx maven with fancy holograms who wants to be a fake superhero, punching ensues.

SPIDER-MAN: FAR FROM HOME is technically the sequel to the Tom Holland Spider-series that started with SPIDER-MAN: HOMECOMING (2017), yet so much has transpired in the Marvel Cinematic Underpants between the two Spidey films (namely, INFINITY WAR and ENDGAME), that the movie seems like a continuation of some other grand adventure, with many star players missing (like Cap, Wanda, Natasha, Thor, Hulk, et al). So there’s an overarching feeling of nothing being as important as it is made out to be – because if it WAS, then all those other supers would’ve been here. It’s Marvel’s own fault. They’ve setup the connective tissue between all these movies so sturdily that they’ve now got to make “excuses” for the absence of other heroes. Thor is “off world,” Dr Strange is “unavailable,” Captain Marvel is– “don’t invoke her name” – excuses that ring faker than Zendaya’s padded bra.

In a world mourning the absence of Iron Man, Peter, during a school trip to Europe, is smugly kidnapped  by Nick Fury and Maria Hill (Cobie Smulders), who run those excuses and petition him as the only superhero they can force to protect Earth without pay. But what about Wanda? Panther? War Machine? Or someone like Ant-Man/Giant-Man, who can turn as big as the water monster that appears in the film’s first lame battle? An inter-dimensional entity is threatening to annihilate Earth and they’re too lazy to send out a carrier pigeon to find Cap or Hulk or even Hawkeye fer chrissakes? And that’s another thing: Why does Fury keep chastising Peter as if he’s an employee who doesn’t want to turn up for work? No one’s paying Spider-Man (or any heroes) to save humanity. What hold does Fury have on anyone with super powers?

The lameness of this whole absentee superhero scenario is equivalent to the lameness of the film’s actual plot. Luckily, the guy who looks like Tobey Maguire turns up in his fishbowl helmet, purple cloak and Christmas-light bodysuit, and magics the water monster away. He calls himself Quentin Beck, but civilians start calling him “Mysterio,” and he claims to be from Earth in another dimension—sorry, MULTIVERSE (happy?) – and he’s followed the monsters here from that dimension to kill them.

Fury and Hill are quick to offer Spidey up as second banana to Mysterio, and more special effects battle ensues, with a big fire monster, Mysterio shooting beams at it and Spider-Man swinging around doing fuck-all. And there’s NOTHING AT STAKE. Because we don’t know what this thing wants. It’s just roaring and breaking stuff. We also don’t know the parameters of its powers or the limitations of Mysterio’s powers as he keeps greening his beams at it with varying effect until at some point it just dies from the beams as if it was Padme (i.e., it lost the will to live).

Soon afterwards, Mysterio scams Stark’s magic glasses off Peter, and he orates his evil plan to his troupe of outcasts. Up to this point, Gyllenhaal has been underplaying as a sincere, trustworthy, staid protector; now he chews scenery like a cartoon as he exposits how everyone in his troupe is personally involved in a revenge plot against Tony Stark. But why are you telling THEM this? They already know. That’s why they’re here helping you with your plot, Hamlet!

Mysterio’s Grand Plan? To unleash these fake monsters – which are really holograms created by drones – and to defeat them publicly as Mysterio, until the world heralds him as “the new Iron Man” … Okay, so you become the new Iron Man. Are you going to fight alongside the REAL AVENGERS when a real threat appears, like Ultron or Thanos or Galactus? Do you think Thor or Steven Strange or Bruce Banner wouldn’t see through your lie about being from another multiverse in one second? Speaking of which, how did you con Fury? Did Fury do ONE SECOND of due diligence background check on Quentin Beck when you claimed to be from another dimension? And why would you put yourself in real jeopardy if you are a charlatan? Have you thought this idiotic plan through, Quentin?

Like his lame plan to kill the kids in Peter’s class: they are tricked onto a tour bus, and the driver stops the bus in a “kill zone” and leaves. A Few Seconds Later: We see all the kids running away from the bus, before the bus goes up in flames … So Mysterio’s plan was to kill the kids in a bus, that they could escape by opening the door? Takes Bond Villain inefficiency to a new level.

The performances are comical and poignant when they have to be, the monster effects are, of course, stunning though unnecessary; the best effects being the way Spider-Man swings and attains those frenetic positions straight from the comics panels (love it!) – but the storytelling is atrocious! Aspects like Fury’s lack of awareness grinds at our suspension of disbelief, especially since he and Hill are surrounded by magic computers and neither of them thought to do a simple Google search for “Quentin Beck” to discover he created tech for Tony Stark, before falling for his tale about multiverses. Not to mention all the other pointless sub-plots, like Peter’s BFF Ned (Jacob Batalon) acquiring and losing a love interest; Aunt May (gorgeous Marisa Tomei) and Happy Hogan (gorgonzola Jon Favreau) having a fling; MJ (Zendaya) discovering Peter is Spider-Man – the affairs all begin and end with this film; it’s dull, fan service storytelling.

In his first 5 seconds onscreen, Spider-Man takes off his mask to speak. CAN NO ONE SPEAK THROUGH A MASK OR HELMET ANYMORE? And the pedestrian, non-scientific CGI manner the masks disappear is insulting to our intelligence. What, all those metal parts are going into a ring around his neck? Why isn’t there any bulge there? Apologists pule that the masks are “nanotech” (another name for magic who cares fuck you) – so Mysterio’s cloudy fishbowl is also nanotech? Where do the clouds go when his bowl blips into his neck housing?

I cannot believe how Marvel have conned everyone into believing this is a thing. WHICH SUPERHERO IN THE COMICS BLIPS OFF THEIR MASK FOR EVERY SPOKEN LINE AND THEN MAGICALLY DOIKS IT BACK ON AGAIN? Show me one superhero that does this?! Yet Marvel have pushed the boundaries of this mask-removal so far that when Spider-Man is walking around WITH a mask on, it seems weird; so weird that Fury tells him to remove the mask because everyone at headquarters has seen him without it anyway! Jesus, it’s a nanotech of stupid up in here!

Peter excitedly talks about physics and multiverses – and everyone gives him a look like ‘Stop being a smartarse!’ So he stops. And Mysterio tells him, “Don’t ever apologize for being smart.” Isn’t this exactly what the movie just did?! This is American humor: someone speaks intelligently, others in room glare at him like HE’S the crackpot; he stops out of – respect? not wanting to make them look dumb? not wanting to insult them by being smarter? What exactly is this joke? It only ever happens in dunderhead American movies. Did those days come and go so quickly with Scientist-as-Hero (Stark, Banner, Alan Turing in IMITATION GAME, Oscar Isaac in EX MACHINA, Steven Hawking in THEORY OF EVERYTHING)? And Americans wonder why the rest of the world considers them dumbos.

Peter gets waylaid in the Netherlands, remarking how kind every stranger is (America, meet Europe, you belligerent redneck ignoramuses), and Happy picks Peter up, by landing a jet in a field full of carefully tended flowers. And America wonders why the rest of the world considers them Ugly Americans.

The climax is a whirlwind of eye-damaging effects that are ambitious, yet feel unnecessary; the drone-fight sequence only existing to create an arc of Spidey having lost his spider-sense (what Aunt May calls his “Peter-tingle” – another dumb and unnecessary running gag) and re-acquiring it when the stakes are high. In a battle where he doesn’t know what’s real and what’s fake – well, he IS fighting Donnie Darko.

Only in this final sequence do we see the classic Spider-Man costume at last! Did I mention how much I HATE that “Iron Spider” CGI costume?! Writers Chris McKenna and Erik Sommers, and director Jon Watts knew they couldn’t let Peter retain that garish costume from the opening scenes because it is too over-powered (what the fanboys call “OP”), so to create adversity for this hero which Marvel has cavalierly over-powered in his last few films, these numbnuts now have to actively rob Spider-Man of his powers, putting him in the black Archer turtleneck duds and the ski mask, and calling him Night Monkey (yet another pointless gag – nothing works in this film, seriously!). In the second act, they magically swish him through costume changes that are illusions – like they’re trying to eat their cake and still have it – but it’s all magic who cares fuck you – it’s a gyp! – it’s a swindle! – it’s the shallowest of fan service visuals! In trying to appeal to everyone – they appeal to no one! Removing the intensity of Peter’s struggle with all these distractions!

Yet the world populace will laud this pap as another Marvel masterpiece. And it will make a billion dollars. And people will call Zendaya beautiful. Only proving that America is getting dumber and uglier. 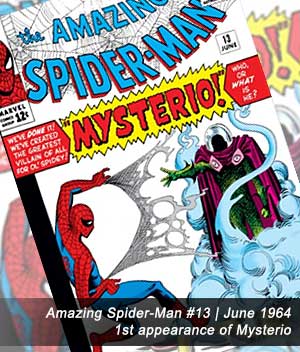