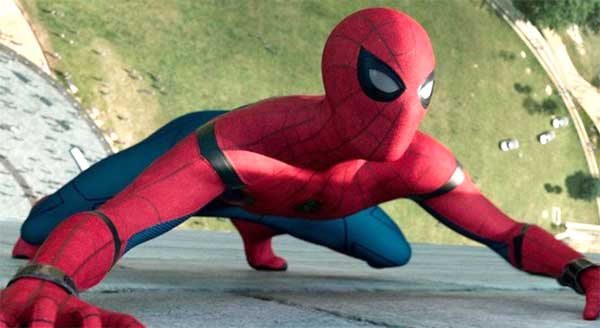 Climbing the outside of the Washington Monument: Touristing Made Easy!

This ain’t your daddy’s underoos...

It’s one of the best superhero movies of the modern era, capturing the tone, humor and desires of its hero perfectly. But is nobody going to protest the blatant retroactive continuity on Spider-Man’s suit? I guess not, because experiencing this movie is much like being webbed in the face – vigorous fun and bombastic entertainment, but if you open your eyes too wide, the white goo starts to sting…

In this telling of the Spider-Man tale, we see no radioactive spider-bite, no murder of Uncle Ben, no guilt-ridden Peter turning to crime-fighting, no J. Jonah Jameson. It’s taken for granted we are well-versed in Spidey lore, so hit the ground running after Spider-Man has fought Captain America’s Avengers (as seen in CIVIL WAR, 2016). And we are told that Tony Stark bequeathed the classic-design Spider-Man suit to Peter Parker, replete with hi-tech gadgetry reminiscent of an Iron Man suit, including a virtual-screen readout in front of his face, 576 web-shooting options, the spider-logo as a remote drone, and a sexy computer voice (which Peter calls “Suit Lady” – serendipitously voiced by Jennifer Connelly, real-life wife to Paul Bettany, who was the voice of Tony’s computer J.A.R.V.I.S.).

Hmm, I musta missed that issue of Amazing Spider-Man… 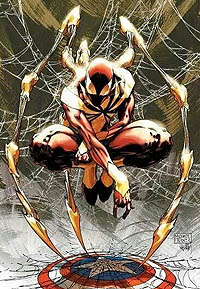 The Iron Spider. Because what Spider-Man was missing –
was three extra waldoes…

NOTE TO NON-FANBOYS: Spider-Man was created in 1962, wearing that friendly neighborhood suit we all know and love. In 2006, in an alternate timeline, Stark does, in fact, bequeath Spider-Man a techno spider costume, dubbed the Iron Spider Armor, but its appearance is very different from the classic costume. It enabled Spider-Man to fly, and included three spider-arms from the middle of his back, called “waldoes.” That techno suit is NOT the one in this movie; the suit here resembles the classic Steve Ditko design, with snappy piping.

Still, they’ve painted themselves into a corner with the suit issue – because Spider-Man ends the movie without his suit. So in the sequel, it means Stark has to invade Peter’s space (read as movie) to bequeath another suit – or are we to believe Peter sews the Steve Ditko design himself like an underpaid Ivanka Trump employee in Thailand? Does his suit retain special powers in the sequel, because I think fans will soon tire of Super-Spidey. And in a Marvel Cinematic Universe where the Avengers exist, can any of Spider-Man’s future foes feel fatal? Just call Mr. Stark if you’re having an inordinately hard time with Kraven or Mysterio or Carnage. He’ll turn up and help – just like when he fixed the ferry – and if he can’t, I’m sure he’ll call one of his super-buds. Just don’t call Hawkeye.

Tom Holland is Peter Parker/Spider-Man, and we already like him going in. Why? Because the producers (at Marvel and Sony) were canny enough to sprinkle him into the cast of CIVIL WAR. We see fight scenes from that film, from Peter’s selfie angles. Usually, I detest home video footage, but used here in a very cool expositional way, we see that infamous airport dustup from very different angles (opening up a whole universe of questions on how it was done so seamlessly). These scenes clue us to Peter’s “one desire,” by showing us the excitement, adventure and respect he garnered fighting alongside Iron Man, and his quest to regain that sparkling moment in time; he wants to be a hero, with all the perks and camaraderie that entails. (“So, to become an Avenger, are there like, trials, or an interview?”) Also, insofar as demographic appeal, Holland is, like, totes millennial. 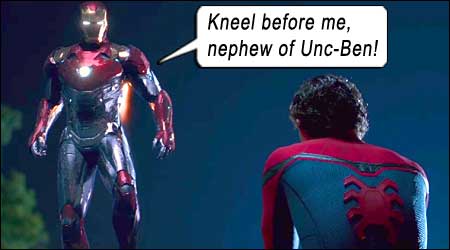 Not-so-hot variations on “Kneel before me, Son of Jor-El!”

Robert Downey Jr. is once again Tony Stark/Iron Man, ramrodding his masculine steel into this movie whether we like it or not. He’s Peter’s mentor and inspiration, and though Peter believes it only a matter of time before being accepted unto the Avengers’ bigtime bosom, Stark keeps him at arm’s length, like a bothersome fan. (“Can’t you just be a friendly, neighborhood Spider-Man?”)

Turns out, there’s something bigtime bosom brewing in Peter’s neighborhood (no, not the coy MILF stylings of Marisa Tomei as Aunt May) – The Vulture. Michael Keaton is Adrian Toomes, who opens the movie with his salvage company cleaning up the alien debris left by THE AVENGERS back in 2012. Tony Stark’s salvage crew appears (led by Tyne Daly in a cameo) and shuts down Toomes, leaving him out of pocket and forcing him to relinquish his salvage. A family man, trying to make ends meet, Toomes surreptitiously keeps the alien devices he’s already scavenged, reverse-engineers them (via Michael Chernus, teased as The Tinkerer) and sells them as weapons on the black market. 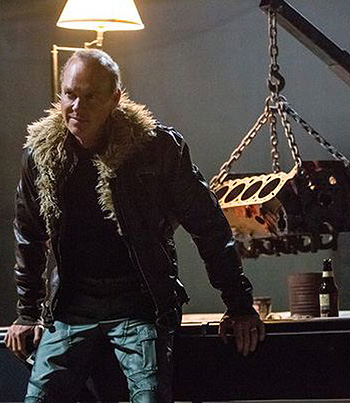 Boudoir décor for the romantic scavenger in you.

Toomes keeps the jewel of his efforts for himself – an iron-winged flight suit – dubbing himself the scavenger of the skies, The Vulture. “Times are changing – we need to change with them.” The second ever Spider-Man villain (appearing in The Amazing Spider-Man #2, 1963), in this age where it has become obvious that corporations are screwing the little guy, we empathize wholeheartedly with Toomes, and he doesn’t come off as inherently evil, but rather, a good man doing the wrong things for the right reasons. (Is that the name of a country song?)

Skip forward to the present, with Spider-Man performing numerous good deeds in his New York borough (including stopping a bicycle thief and helping little old ladies), and reporting them daily in hopeful phone calls to Stark’s assistant Happy Hogan (the man-shaped balloon-clown Jon Favreau), who keeps impatiently snubbing him…

Meanwhile, teen life goes on, as Peter tries to reconcile his newfound powers with school, homework, his crush (Laura Harrier as Liz) and his best buds (Jacob Batalon as Ned, who would discover Peter’s secret identity, and give Peter a comic relief sounding board). Peter’s busy-time as Spider-Man is explained away to friends as his “Stark Internship.”

When Peter comes across the alien weapons (with Donald Glover as a street thug, and both Logan Marshall-Green and Bokeem Woodbine teased as The Shocker), he crosses paths with The Vulture. And sees the chance to prove himself to “Mr. Stark” and earn the big boy pants. If only any hero could overcome impossible odds in the second act, without splitting a ferry in twain…

SPIDER-MAN: HOMECOMING reintroduces Spider-Man as the most boy he’s ever been onscreen – Tom Holland is the youngest actor to don the webbed duds (barely 20), and he acts every inch the excitable, amazeable 15-year-old he’s meant to be. In the first scenes of Peter breezing through the crowded school yard, Spoon’s The Underdog underscores his position perfectly: a person aching to prove himself, to be a part of the “cool” gang (in school, and amongst his newfound super acquaintances).

Not only is HOMECOMING a wonderweb of thrills and excitement (through excellent directing by Jon Watts, and masterful editing by Debbie Berman and Dan Lebental), it is really very funny, not just due to Spidey’s flip one-liners, but because of the situational-comedic aspect of entangling the newly-super Peter with his decidedly mundane surroundings: Ned’s starstruck questions on what it’s like to be the Spider-Man; Hannibal Buress whipping his few seconds cameo into gold; Captain America doing PSAs!; Peter’s fawning to Iron Man, his craving for acceptance with a girl, with the public, and his socially-bizarre interaction with the force of nature, Michael Keaton. 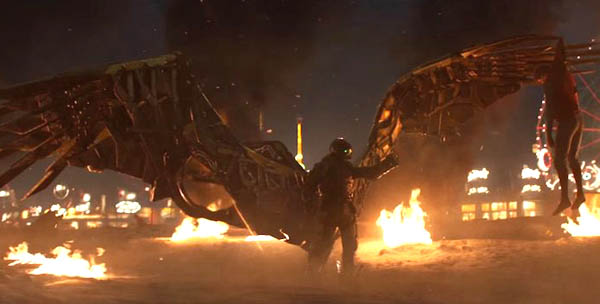 Instead of crushing Spider-Man quickly, The Vulture talks until Spider-Man escapes.
Ironically, that’s how Batman used to escape too!

Keaton: from Batman – to Birdman – to Vulture! At this point in his career, he can read a cereal box and make it compelling. In a twist of fate, his Toomes winds up chauffeuring Peter. There is a quiet dialogue scene between the two, as each realizes who the other is. And it’s probably the best scene in the movie, for its weight, its menace, its sheer Keaton-ism.

Besides the spectacle of its set-pieces (saving the Washington Monument elevator, the Staten Island Ferry sliced in half, the clash atop the Stark plane), which rival the complexity, excitement and suspense of Doc Ock’s elevated-train battle, SPIDER-MAN: HOMECOMING is one of the “bravest” superhero movies yet made. It really does reflect the progressive political climate in the United States (no matter the close-minded idiocy of the orange supervillain “leading” the country). Not counting the brazen retconning of the suit, how “brave” can a summer tentpole actually be? Well… 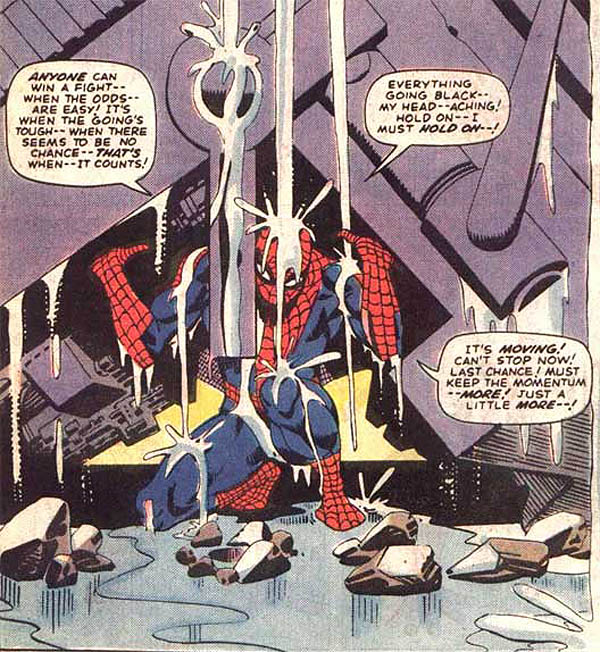 Amazing Spider-Man #33 | “The Final Chapter” (1966)
Spider-Man trapped under heavy machinery, freeing himself not just with muscles, but with the willpower to triumph. This scene is emulated in HOMECOMING, The Vulture’s machinery toppling on Peter, while he overtly exclaims his goals, “Can’t do it; too heavy— But no! Can’t give up!” etc., as if he’s in a paneled comicbook! (Consider: if Peter was trapped while wearing the techno suit, audiences would rightly ask why he isn’t activating the Heavy Machinery Lifting App.)
In the documentary, IN SEARCH OF STEVE DITKO, Neil Gaiman called it
“one of the top two or three superhero moments of all time.” 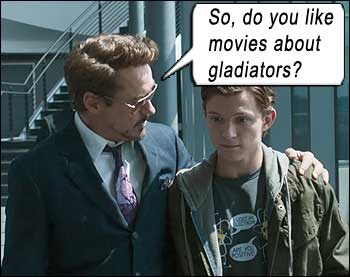 I imagined the renunciation of THE most recognizable element of Spider-Man (his suit!) would lessen the enjoyment of the film, as Peter resorts to his hand-made underoos of hoodie and goggles, but the writers (led by Jonathan Goldstein, John Francis Daley and director Watts) had to divest Peter of Stark’s multi-purpose threads, in order to arrive at one of the most iconic redemption scenes in Spider-Man history…

After Peter screws up an undercover sting, he begs Stark not to take back the suit, “I’m nothing without the suit!” and Stark recounts the lesson he learned in IRON MAN 3: “If you’re nothing without the suit, then you don’t deserve it.” Just like James Cameron divested the TERMINATOR of its outer flesh in the third act, to show us that under the exoskeleton of the man, there pumped the pistons of a machine, Spidey’s filmmakers prove that under the exoskeleton of the spider-suit machine, there beats the heart of a hero.

Thus, when the object of his desire is offered to him in the end – membership in the club of his dreams – he finds he doesn’t need it anymore… Like all Spider-Man films before it, SPIDER-MAN: HOMECOMING concludes with the boy realizing what it takes to be the spider man: It’s not needing to be Tony Stark’s bottom bitch.

IN SEARCH OF STEVE DITKO ♠ Part 1