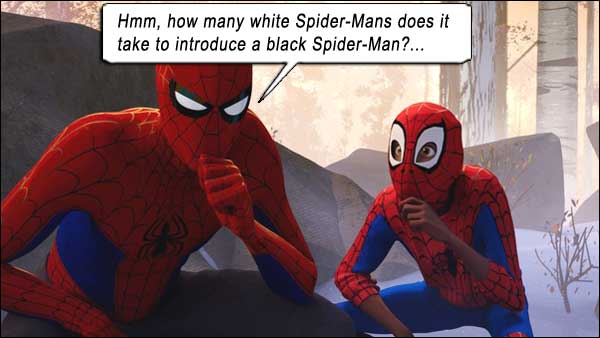 A kinetic new vision for the next generation of man-spider fans.

Much like THE LEGO BATMAN MOVIE, SPIDER-MAN: INTO THE SPIDER-VERSE is simultaneously ensconced in, and standing apart from, the Cinematic Universe its titular character inhabits, roaming freely in any entertaining direction it fancies, combining, referencing and cross-pollinating canon from its 56-year spectrum of spider-comics and spider-movie lore.

As if to drive home its plot about crossing dimensions, this visual feast combines the classic form of 2D cartooning with the techno-blam of 3D computer-graphics, all awash in the newspaper idiom of Benday dots (actually CMYK halftones – as we are informed by CinemaWins – intended to resemble the Benday dots of old newsies!), hurling us headlong through numerous camera tricks, filmic signatures, and cartooning styles layered upon each other even within the same frame,; there are just not enough plaudits in the English language to heap upon this pioneering form of movie-making. 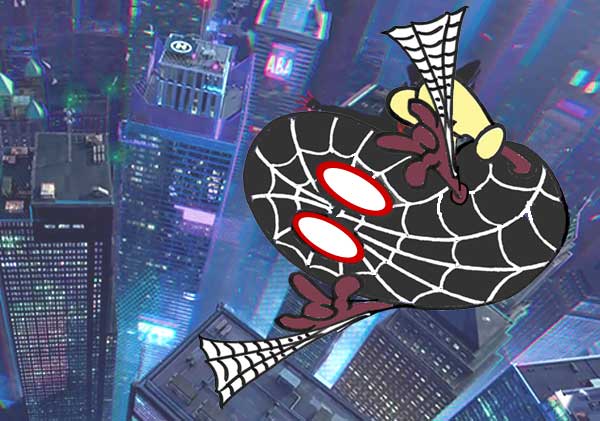 Though this story centers on Miles Morales – the Spider-Boy introduced in 2011 (Ultimate Fallout #4) – SPIDER-VERSE is unafraid to mine all corners of the Spider-verse in a cocksure conflagration; from plots involving Tobey Maguire and Andrew Garfield, skimming across the Lizard and the Scorpion, portraying seething modern incarnations of the gargoyle-demon New Goblin and man-mountain Kingpin; from mimicking dialogue in the first ever Spider-Man comic, to re-envisioning the grand disco faux pas in SPIDER-MAN 3 as a dose of cool… And in the interlacing of its media, the plot unabashedly interlaces spider-people from other dimensions into the mix…

We first meet Peter B. Parker (voiced by Jake Johnson, perfect casting), as he introduces himself as “the one and only” Spider-Man, narrating his origin story “For the last time…” as a spine-snapping montage rolls through high points of the Maguire movies we know so well, with this cartoon Spidey pummeling harder, loving softer and dancing dirtier. He’s the original Spider-Man we know and love, classic suit, quipping fervor, empathy-driven and cool as dry ice (with a very valid reason for the ‘B’ in his name). “After everything, I still love being Spider-Man! The only thing that stands between this city and oblivion – is me!”— 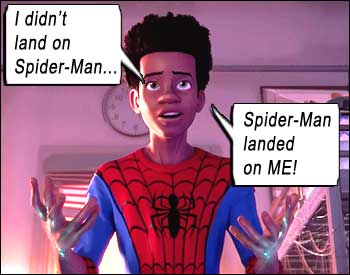 We can sense how hard writers Phil Lord and Rodney Rothman, and directors Rothman, Bob Persichetti and Peter Ramsey worked to bring Miles Morales to the screen. Let’s face it: a black kid donning the mask of a well-loved white superhero – he’d better be damn well-written and dynamically visualized or he won’t last long in this seething racist social media dung heap we call American society. His comicbook debut was met with joy and derision in equal parts, however the synergy of Obama’s presidency, Donald Glover’s appearance in a Spider-Man suit teasing a live-action Morales character, and the existence of a previous Latino Spider-Man (Miguel O’Hara in 1992’s Spider-Man 2099) ensured Miles a wall-crawling space on the big screen, if not as a staple in the Marvel Comics universe.

Thus, here we are at last, panning in on this black teen (Afro-Latino, to be precise – father African-American, mother Puerto Rican); singing a modern rap song to himself as he draws cartoons at his desk. Perfectly voiced by Shameik Moore, Miles has school problems, girl problems, parent problems, and – he’s just been bitten by a radioactive spider that imbued him with spider-powers! (We can also hear that Miles has musical taste problems, as the song he’s listening to is Sunflower by that face-tatted, auto-tuned douche Post Malone and equally-untalented rapper Swae Lee. But we get the point: he’s a Millennial who still needs to reach The Age Of Reason.)

Miles hears on the news: “Tonight, the hero known as Spider-Man, has died.” In Miles’ timeline/dimension, the actual Peter Parker is dead (hence Peter B. Parker in this adventure is from another timeline!).

The wife and child of crime boss Kingpin (voiced by Liev Schreiber) have died, and Kingpin plots to access other dimensions where they are still alive and drag them back to this one. His dimension-machine is called the Collider – and it can be stopped with a McGuffin flash-drive. However, his tampering with dimensions rends the fabric of spacetime, causing five other Spider-people to accidentally slip from their dimensions into Miles’ dimension. 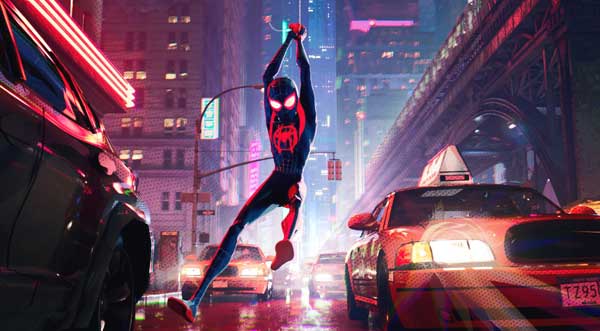 NuArt on the hoof…

The five “alters” (as in “alternate universe” spider-people) are Peter B, Peni Parker (the manga schoolgirl with the robot, voiced by Kimiko Glenn), Spider-Gwen (voiced by Hailee Steinfeld; in her universe, she’s the one who is bitten and a non-super Peter Parker is her love interest), Spider-Man Noir (kinda like The Shadow, rendered in black and white and melodrama, voiced by Nic Cage), and Spider-Ham (‘nuff said! Voiced by John Mulaney sounding like Nathan Lane). And each of the alters narrates their origin tale, beginning with, “For the last time…” It’s a cliché filmic device that serves the dual purpose of revealing these relatively unknown spider-peeps to cinematic audiences, and gagging that each of them believes they are “the only one.”

Other characters are powerfully rendered: Aunt May (Lily Tomlin) is a feisty old biddy, and there is Dr. Livia Octavius (Kathryn Hahn), “My enemies call me Doc Ock!” Miles’ father is voiced by Brian Tyree Henry, who warns Miles about wayward Uncle Aaron (Mahershala Ali), “You don’t want to end up like him.” Unbeknownst to both of them, Aaron secretly works for Kingpin, under the moniker The Prowler.

GodDAMN this movie has momentum! AND an understanding of comic books never before demonstrated by ANY movie adaptation that came before.
— CinemaSins

Yes, I’m quoting the channel CinemaSins, as opposed to CinemaWins (which I cite above), and take note that both channels agree SPIDER-MAN: INTO THE SPIDER-VERSE is a cinematic experience as singularly amazing as Spider-Man. It says something when a film has won the Oscar, the Golden Globe and BAFTA for Best Animated Film (and a host of other awards). 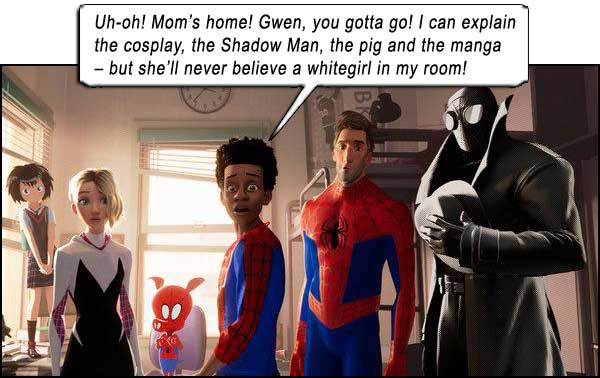 Filled with thousands of Easter Eggs and nuggets for Spider-Man fans of all stripes, SPIDER-VERSE pushes conventional cartooning styles to the brink, pioneering new techniques and volatile mixtures: backgrounds slightly out of focus, speech bubbles, jagged fracks to alternate cartooning styles. From the poster alone, we can sense its kineticism, the character not just leaping off the building, but taking a leap of faith with comics fans.

There is the contrast of Miles’ falling “AAAAAA” (a stream of capital ‘A’s follows him as he plummets to the ground, not yet used to his powers) and the triumph of his rising “WOOOOO” (the word following him as he thwips vertically upwards, now adept); there is the potent moment Miles gazes at a Spider-Man costume displayed behind glass, and his face reflection overlays the mask within. That’s movie-making; these are the moments that make movies; that’s desire and inspiration and redemption rolled into a singular poignant moment.

SPIDER-VERSE is not only astounding to look at – it is also emotionally charged, as the alters, Peter B especially, shepherd Miles through his spider-puberty. His arc and redemption focus on Miles’ outer strength (as in being able to utilize his super powers) rather than his inner strength (as in Amazing Spider-Man #33, “The Final Chapter,” where Spider-Man had to dig deep to free himself), although there is a slight nod to this inner growth when Miles – like Peter – must also face the death of an uncle. 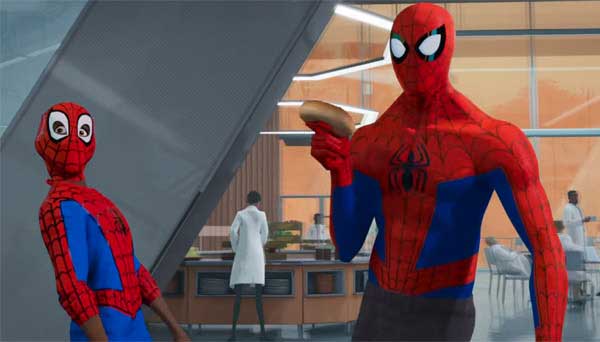 The inclusion of Peter Parker in SPIDER-VERSE (the “B” notwithstanding) lent it unlimited street strength. For those barely familiar with Miles (myself included), Peter’s presence was a welcome bridge to that character. Peter’s presence graphically illustrates the expertise that goes into being a spider-person, so that we can see the goal Miles must reach and the obstacles he must overcome. Peter – even though his role was mostly comedic – lent gravitas to this whole arachnid stew, because of his veteran status, his expertise also girding the alters’ expertise, because we take it for granted their expertise is akin to his. Peter B. Parker was needed in this tale to pass the torch to Miles, thus signing him off as adept enough to take it.

Yes, there is a cameo from Marvel maven Stan Lee (who died in 2018 before this movie was released), and the outro credits start with a tribute to Stan, with his words: “That person who helps others simply because it should or must be done, and because it is the right thing to do, is indeed without a doubt, a real superhero.” Then another title card, addressed to Stan, presumably from all of us: “Thank you, Stan Lee and Steve Ditko, for showing us we aren’t the only ones.”

And all I can think to say is: “WOOOOO!” 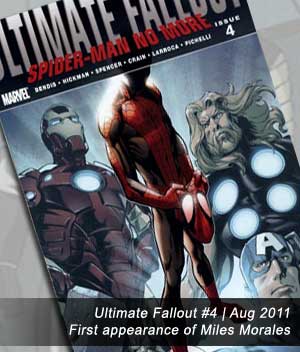 W.E.B. = Woman Empowering Bullshit.
Probably the only thing I object to in this whole movie is the way Spider-Gwen appears in a hail of estrogen. Gwen slams into frame, causing Miles and Peter B to get tangled in their own webs and hang there like dummies witnessing her entrance. Novice Miles might be shocked into entanglement, but is it really feasible to have Peter B also display such ineptitude after the movie worked so hard to establish his bona fides?

A small plot point, but indicative of a very large problem. The majority of women who wish to educate men into accepting them as equals are not really seeking equality but superiority. And that is just as unevolved as the male mindset that kept women downtrodden since biblical times. And this wrongheaded ethos is unfortunately filtering down to the younger generation that might actually get the “battle of the sexes” right. It would have been just as easy for Gwen to appear and startle the men comedically without having them get tangled in their own webs like dorks, but the movie opted to go the easy route of degrading men to uplift women. This emasculating double-standard is becoming too acceptable in modern society, ironically, because men are letting women get away with it!