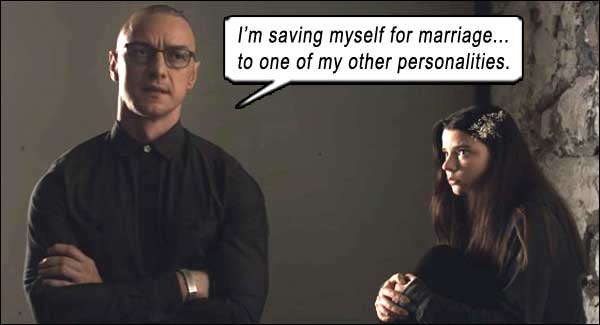 Professor X has been hearing those voices in his head again…

Writer-director M. Night Shyamalan returns to form as master filmmaker with his deviously intriguing thriller, SPLIT (as in personality). A showcase for James McAvoy, who tears into his role as Dennis, a person with D.I.D. (Dissociative Identity Disorder, the vogue name for multiple personality disorder), with 23 distinct personalities, who kidnaps three college girls as a sacrifice for a fearsome 24th personality that he foretells like a harrowing prophecy.

CYNICAL POFFY SEZ: From the outset, the PG-13 rating on SPLIT makes it not as gripping as it could be. When we read of a kidnapped woman “kept in a shipping container and raped every day” in real life, this movie’s tale of kidnapped teen girls that remain untouched reads as weak sauce. Yes, they’re here to be “sacrificed” but that’s a payoff in an uncertain future. And while we wait?… You mean to say that none of Dennis’s many male personalities were “disordered” enough to even touch ‘em up a little before dinnertime?

LECHER POFFY SEZ: The three girls are Haley Lu Richardson, Jessica Sula and Anya Taylor-Joy as Casey. Richardson and Sula are forgettable and replaceable, while Taylor-Joy’s Euro-model perfection and Ace Frehley lips make me wonder who wouldn’t want to kidnap her and keep her in their basement. And touch her up a little before dinnertime…

CINEPHILE POFFY SEZ: Of the three girls, Casey is the social misfit, the recluse. Flashbacks reveal why Casey is guarded, simultaneously giving us clues on how she will survive the ordeal. Night’s writing, with the slow revelation of character and subtle foreshadowing, is once again remarkable.

DR. POFFY SEZ: Betty Buckley is Karen Fletcher the psychiatrist (she was the blond gym teacher in the original CARRIE). She chat-therapies Dennis occasionally, usually in his fashion designer ego, Hedwig. She’s writing a book, and giving speeches, on compelling studies with D.I.D. sufferers: how a lady who was blind for ten years developed sight with three of her personalities – how her optical nerve actually regenerated because of her beliefs!; of some personalities within a sufferer developing diseases, while others remained well… which jigsaws into Dennis’s warning of the Beast, his 24th personality, a hairy, fierce berserker, “a lot bigger than I am, tall, very muscular…” (um, Wolverine?)

THESPIAN POFFY SEZ: It is in these chat sessions where McAvoy steals the movie. With every hard closeup, we can read Dennis’s personalities battling for primacy, fleeting subversion, prevarication, doubt, hubris, glimpses just under the skin of a person wrought with guilt, paranoia and menace. And when his various personas visit the girls in their basement cell, he brings different accents and dialects, including a young boy and a matronly woman.

FANBOY POFFY SEZ: That McAvoy is a hottie, even wearing a turtleneck.

DR. POFFY SEZ: Dr. Fletcher reminds us that “D.I.D. patients have been known to change their body chemistry with their thoughts. Perhaps they are capable of something we are not?”

HISTORIAN POFFY SEZ: Is this hypothesis a blanket argument that covers all those tales of metamorphosis from the past to the present? From lycanthropism to the Incredible Hulk? These ideas set our mind free to roam amongst legends and madmen…

CYNICAL POFFY SEZ: In a flashback we see 5-year-old Casey (Izzie Leigh Coffey, sooo pinchable-cheeks-cute), on a hunting trip with her father (Sebastian Arcelus) and uncle (Brad William Henke). And the incident that would drive her inwards… Our minds at first shy away from the possibility that the tale might be heading towards child molestation, but then accept that only horror of this magnitude might explain Casey’s quiet introversion. But again, PG-13 ruins the impact of what might have been a disturbing scene. When Uncle is on all fours, in tighty-whiteys, pawing at the ground, cajoling Casey to do the same, because they’re playing at being “wild animals” – he should have been naked. That’s all. I mean, I don’t want to see a cute little girl being molested, nor do I especially want to see doughy uncle ass, but in a way, the tighty-whiteys were more horrifying for what they say about this gutless hypocritical society…That’s all I’m sayin’… I’m sayin’: Be a man and pull those panties down! 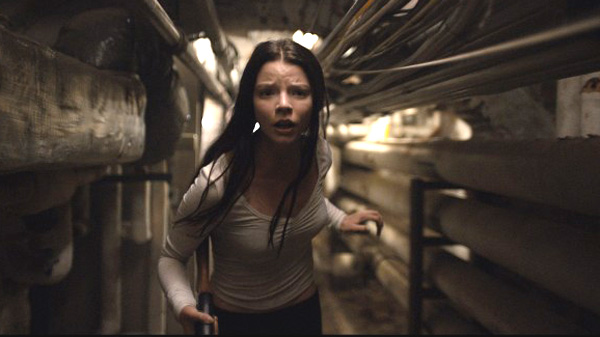 LECHER POFFY SEZ: No one cares where you’re running – as long as you keep bouncing as you do.

CINEPHILE POFFY SEZ: The story weaves in directions unexpected, with surprise after surprise in its final act.

LECHER POFFY SEZ: —as Casey’s breasts heave with exertion, in their ripped t-shirt, her thighs finally exposed, and we see—

FREUDIAN POFFY SEZ: —Shutup, Lecher Poffy! In an interview, McAvoy makes the interesting point that only one of his many “personalities” was born of parental sex; all the others were born to fulfill various purposes during times of insurmountable psychological stress. To him, the Beast represents the highest form of human evolution (is he talking about the X-Men again?)…