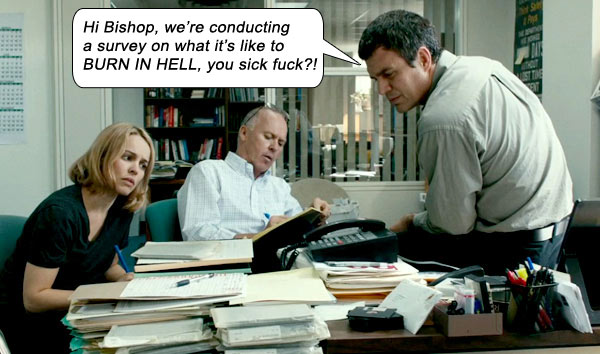 Pederast Priests and The Coverup That Rocked a Religion.

What other business could you be in where your company gets caught running a child sex ring since forever, and you still keep your customers?
— Bill Maher, REEL TIME, March 2013.

If only the movie SPOTLIGHT was called BUSTING RAPIST PRIESTS, maybe it would be better served by its title. As it is, naming the movie after the Pulitzer Prize-winning investigative team from The Boston Globe doesn’t ring any bells. Because it gives no indication of what the Spotlight team did – uncover hundreds of priests in 2001 involved in pederasty and coverups in the Boston Archdiocese.

Priests who preyed upon children, who were then systematically shunted from diocese to diocese as their crimes were uncovered but not indicted. Lawyers who represented the priests, who were bound by the strength of the church (read as paid off) not to divulge names or details of cases. Damning case documents which should have been on public record made to disappear by the church. Lawyers who represented priests’ victims, vilified by the church for trying to bring the rapist priests to justice!… 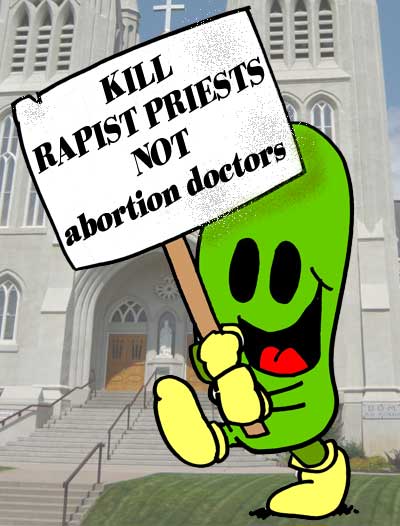 Poffy’s Open Challenge To The Law: When you stop priests raping kids, THEN you can come for my parking tickets.

Though we know of the broad strokes in this shameful worldwide outrage – priests raping children, then cowering behind the skirts of an institution supposedly steeped in righteousness – SPOTLIGHT succinctly fills in so much more of the picture. For instance, the offending priests (under their unholy protector, Mother Church) are represented by lawyers as zealously as any private citizen, not only because it is the priests’ right, but because the Church has such deep coffers it can afford the best legal counsel. In other words, buying the spiritual bankruptcy of the lawyers; and the lawyers ultimately profiting from sexual abuse of children!

We hardly consider the perception of the abused children, which is demonstrated here distressingly through the victims, now grown: “When you’re a kid from a poor family, when a priest pays attention to you, it’s a big deal. So when they ask you to do something questionable, how do you say no to God?” Ironically, exactly as the church depicts Satan approaching you in the guise of a savior, so too do their very own representatives in Christ come at their underage victims in the guise of God.

And ultimately: “I was preyed upon, not prayed for.”

Michael Keaton (BIRDMAN) is tactful head of the Spotlight team, Walter “Robby” Robinson, who must deal with the smarm of condescending church representatives. Mark Ruffalo (FOXCATCHER) shines as Michael Rezendes, with the intensity of a windup toy. Rachel McAdams (SOUTHPAW) is Sacha Pfeiffer, too pretty for words, who delves into S.N.A.P. (Survivors Network of Those Abused by Priests) and the psyches of the victims. And Brian d’Arcy James rounds out the Spotlight team as Matt Carroll, who discovers a priest-rapist’s house one block from where he lives with his small children!

Stanley Tucci (TRANSFORMERS: AGE OF EXTINCTION) is lawyer Mitchell Garabedian, representing sexual abuse victims – and vilified by the Church! Scruffy, unorganized, with an office disappearing under paperwork, Garabedian was daily shattered by sexual abuse cases, yet could make no headway in publicizing the scandals because the Church would “disappear” public trial documents, making it impossible for him to corroborate his claims. He tells Rezendes: “If it takes a village to raise a child, it takes a village to abuse one.” The Church would use all their power to discredit the people who expose them. Garabedian was the good guy, trying to restore balance, humanity, normalcy – yet he was the one attacked, on the run. See how the devil (i.e. church) comes at you, telling you the man doing right is in the wrong?

Jamey Sheridan (who played the devil in Stephen King’s THE STAND) is senior judge Jim Sullivan, paid off by the church not to tell. (Any wonder they could buy off Satan so easily? They just had to roll over in bed and ask.) And Billy Crudup is slick lawyer Eric Macleish, who zealously represented accused priests (“turning child abuse into a cottage industry”), yet felt a twinge of conscience and sent a story to The Boston Globe years ago, that went unnoticed. Robby Robinson would kick himself that it took so long to see the threads coalesce into a scandal. 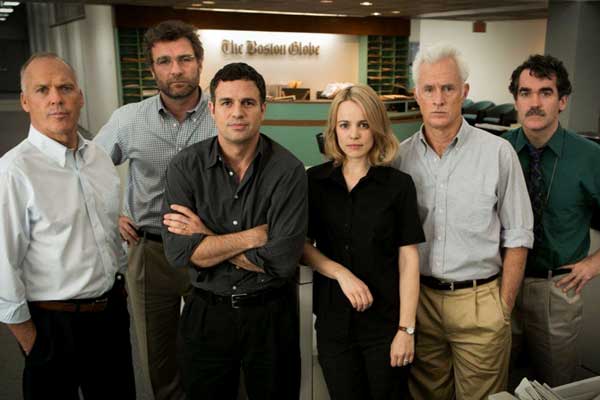 The scorching level of talent in this movie is secondary to the gripping way the infuriating case is spelled out by writer Josh Singer (THE FIFTH ESTATE) and director/co-writer Tom McCarthy (THE COBBLER), driven like a detective thriller, tension mounting like a gargoyle on a cathedral rampart. The reporters get closer and closer to a villain – who is EVERYWHERE. By the time they have uncovered 87 priests involved in sexual abuse – in the Boston area alone! – the Church’s claim of “a few bad apples” is no longer tenable. A psychiatrist refutes the “few bad apples” palliation, calling such a high number a “recognizable classifiable psychic phenomenon.” A skulking reality hiding in plain sight, abetted by not just the bishops in power who transferred offending priests to other dioceses (or sent them to “treatment centers” – church-authorized safe houses), but abetted by judges and lawyers as well, and simply by the instilled attitude that something like this could not possibly happen in an institution so “blessed.”

Are priests so smarmy and arrogant about all the “good” they supposedly do, that they feel they can claim the asses of young boys and girls as recompense?

Maybe call it CATHOLIC PRIESTS CAUGHT WITH THEIR COCKS OUT (?). (If the MPAA censor this grand descriptive title, they’re on the side of the rapists…)

When you don’t question authority, this is the kind of thing that happens. Institutions do things they shouldn’t do; they become used to getting away with things that someone should have called them on earlier, and when you have so much deference for an organization that you’re not willing to ask hard questions, this could be the end result.
— Sacha Pfeiffer, Boston Globe reporter, Spotlight team.

SPOTLIGHT pulls no punches as its team beats shoe leather the old-fashioned way, physically checking basement files, knocking on doors, waiting for hours for departments to open, for lawyers to see them, for phone calls to be returned, for evidence to be corroborated, and eventually crucifying their perps on a cross of mainstream media.

During 2002, Spotlight published over 600 articles pertaining to this scandal. The end title cards tell us that “major abuse scandals have been uncovered in the following places,” followed by an endless list of virtually every city in the United States, followed by another endless list of every country in the world.

I want to hug and kiss this movie, and put my hand down its pants like a priest. Thank You Tom McCarthy, for keeping SPOTLIGHT indicting and unforgiving, never backpedaling, never relenting in the accusations and evidence. But how many more bitchslaps upside the head does society need before something gets done about this plague on humanity? The anti-christ is already here, represented in every ordained “holy” man who continues to freely walk the Earth, after sodomizing / fucking / raping a child…

Let’s not kid ourselves: though SPOTLIGHT shines a white-hot beam on this epidemic worse that AIDS, worse than terrorism, worse than Trump, NOTHING will continue to happen. As long as we continue to hide behind introspective titles like SPOTLIGHT, and high-minded terms like “archdiocese” “bishop” “vatican” “infallible” there remains a psychological buffer on  child-fucking priests being brought to justice.

Okay, so we’re agreed: we reissue the movie as CHILD-FUCKING PRIESTS BEING BROUGHT TO JUSTICE…

SPOTLIGHT: The Story Behind The Movie

Practice Makes Imperfect
Rezendes says he was not a practicing Catholic, but always thought “one day he could go back”; that he “had it in his back pocket” like a trump card. But why regard religion as a trump card? I loathe the way religion is taken for granted as the “right” mode of existence; that being outside of it means being bereft. The mindset of the laity is reflected in Rezendes – taking it for granted he is an inherently good person because he wants to “go back.” But why can’t it be shown that LEAVING the superstition and small-mindedness is the best thing anyone could do? And even considering “going back” is the STUPID choice.

It’s an outrage, I tell you!
Amazing that SPOTLIGHT is not being picketed by christians. They’ll picket Monty Python for “Blessed are the cheesemakers,” they’ll picket a bible movie for Mary the Virgin Whore looking slightly Lebanese – but a movie showing the stormtroopers of their religion being taken down like the pederasts they are, they leave alone. Well, I’m going to picket this film. It’s an outrage, I tell you – that more people are not aware of this movie and going to see it! Change the title to PEDERAST PRIESTS (And The Coverup That Rocked A Religion) and I’ll put down the picket sign.