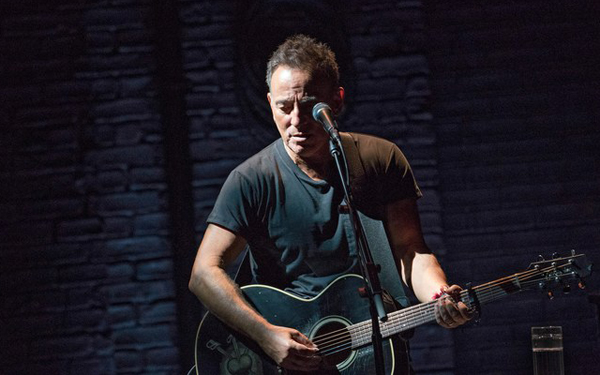 In SPRINGSTEEN ON BROADWAY, Robert De Niro talks about his music, his life, his family, his—no wait, that’s Bruce Springsteen. That’s Bruce Springsteen? Call up your mental image of The Boss, from whichever period blows your skirt up: the youthful, scraggly-bearded troubadour, the 80’s rocker with the bandanna and sleeveless denim jacket, the elder statesman on tour post-Clarence – now look at Bruce here. Nope, not him.

Introspective, eloquent, honest, funny, vulnerable, the first thing De Niro does is dispel that working man mythos: he tells us that though he’s sung about all those factory workers for decades – he’s never worked in a factory! He assures us he made it all up because “that’s how good I am.”

At the Walter Kerr Theatre, SPRINGSTEEN ON BROADWAY ran from October 2017 to December 2018 for 236 performances. (He confesses: “I’ve never worked five days a week – until right now!”) Some claim this filmed set is the final performance; some claim it is mid-2018. If you care that much, Bruce fans, call director Thom Zimny (a veteran of filming Bruce and the E Street Band in numerous performances since 2001). What I want to know is: that last bit he does with the single Hollywood tear inching down his cheek – did he weep in that spot for all 236 shows? Phouf! No wonder people say De Niro is such a good actor!

Renowned for his 4-hour rock shows, can Springsteen pull off just standing on a bare stage and filling 2 and a half hours with poignant tales of ma and pa and first guitar? In every phrase from his poet’s pen, he’s been The Storyteller, and at those rock shows, we can sense he’d love to tell E Street to take five while he just rambled on about his underprivileged life in those steel towns, with Mary in her summer dress, running red lights in his ’69 Chevy. I’m thinking this is fulfilling a lifelong dream for Preacher Bruce, who testifies like the devil’s at his heels…

Armed with an acoustic guitar and grand piano, Springsteen’s anecdotes are often accompanied by him noodling soft arpeggios, or breaking into the actual song inspired by the tale. Yet when he does start singing – it’s a letdown. Breaking down your rock songs into basic acoustic nibbles works well for some artists, however, even Springsteen’s hits and faves (Thunder Road, Tenth Avenue Freezeout, Badlands, Born In The USA) do not translate well as introspective acoustics. The stories behind them are great to hear, from the artist himself, but unless you are a rabid Bruce fan (which most Bruce fans seem to be, granted), these interludes start to feel a little Dean Martin-ish, in the sense that whenever Dean would sing – no matter how much you loved the Martin-Lewis movie – your eyes glazed over, and you used the opportunity to hit the can, or check the fridge for a snack. Same here. Bruce is not a virtuoso player on either instrument (unlike Prince, who can transfix you with his inimitable solo playing), so we are left wanting the songs to be a little more: a little more full, a little more recognizable, a little more electric, a little more loud, a little more beat…

Being there would have definitely made the experience more bearable, as you are in the presence of this unassailable megastar, so the audience is enamored with both the jibber-jabber and the grabsplatter – but whether that translates to the small Netflix screen, is questionable. But who am I, but a guy who’s been in a Springsteen Tribute band, so know these songs intimately? Yet I was still unimpressed, as the music was interfering with a performance that was more attuned to revealing the man through his locution rather than his music (which we’ve grown accustomed to over 4 decades). Paring the music down did nothing to “add” to its sheen – speaking about it was the added spice, playing it solo was a disappointment. (To be honest, you know what this Feature spurred in me? The desire to surf YouTube for classic 70’s and 80’s live versions of Thunder Road, Rosalita, Jungleland…)

Patti Scialfa, Springsteen’s wife/ bandmate/ Cate Blanchett lookalike/ mother-to-his-kids comes out for a couple of duets with him. 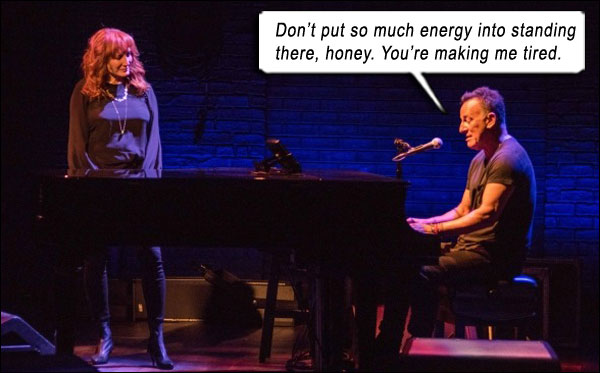 Bruce fans will love this insight into the making of a megastar, Springsteen describing his “long and noisy prayer” – his career – from his ambition at a young age in his small Jersey town, where there was no music scene (“I invented Jersey!”), to his driving across America (when he couldn’t drive) for an audition, to his mother’s walk-home strut, his father’s drunken card games, to his first meetings with his wife Patti, and the love of his life, Clarence Clemons. (I still wonder at the bromosexual bent Springsteen displayed towards Clarence; kissing “The Big Man” on the lips constantly onstage, and sometimes the lips on his face even.) If there is an arc to the parable, it is that this man who was Born To Run (from his town, his parents, his school, his responsibilities) now lives “ten minutes from where I grew up in Jersey.”

On the other hand, for non-fans, it may get a little tedious around the 2-hour mark. Even quicker if you don’t know the songs and were expecting some sweat and volume and Little Steven…

things to think about:

He gets political towards the end. He never mentions Dumbo Donald, but we know who he’s talking about when he talks about people on the border. Back to looking (and now sounding) like De Niro.

And then – just like his live shows – just when you think he’s done (as the crowd rises to its feet while battering his guitar during the finale, Dancing In The Dark) – Springsteen segues into another song, then stops and goes deep introspective, effectively killing the “up-mood” of what probably should have been the finale. Everyone is sitting again, and it’s dead silence listening to Springsteen ramble about religion, “standing in the shadow of his church,” then reciting The Lord’s Prayer… Jesus Christ! Literally! Replete with that Single Hollywood Tear.

But he’s still not finished. Because he’s Bruce. Having only teased it at the beginning, now he bookends his mighty yawp to the universe, and bangs out as a final outro – Born To Run.

After being used to seeing kinetic, soul-thrashing, knock-down-drag-out performances like this, it’s hard to see Bruce old and slow and De Niro, introspecting his way into autumn. I fallback to my regular refrain: Fuck Old Age.